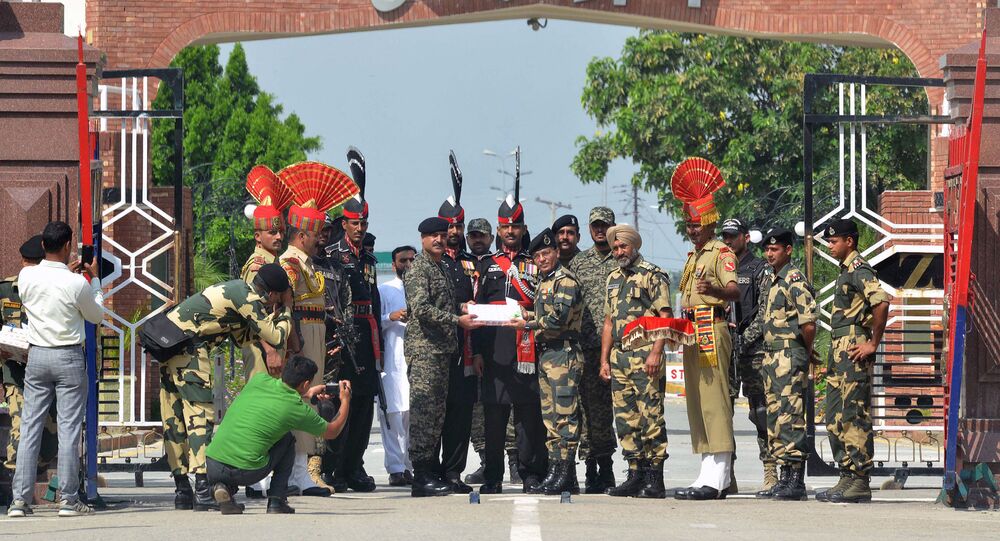 India and Pakistan announced an unexpected ceasefire along the Line of Control and international border in February after years of relentless fighting over the disputed region of Kashmir.

India's and Pakistan's armies exchanged sweets and greetings along the Line of Control (LoC) on the occasion of Eid-al-Fitr, which marks the end of the month-long dawn-to-sunset fast of Ramadan, on Thursday.

"The ceremony is seen as a confidence-building measure against the backdrop of recently agreed ceasefire. The greetings were appreciated by both armies and should promote goodwill and mutual trust," the Indian army statement read.

An Indian army official said the newly achieved peace along the LoC thanks to a renewed ceasefire, has brought warmth, which has been displayed on several occasions between the neighbouring countries.

Indian, Pakistani soldiers exchange sweets on the occasion of Eid. Sweets exchanged at the famous Tithwal bridge. Tithwal is one of the five crossing points along the Line of Control between India and Pakistan. https://t.co/EAQdqlpzs3 pic.twitter.com/iFiBX6sjY7

India's and Pakistan's armies exchange sweets on major festivals such as Eid, Holi, Diwali and their respective National days. However, this tradition was stopped after Pakistan unilaterally downgraded diplomatic ties with India after the Narendra Modi-led government revoked Jammu and Kashmir's temporary special status in 2019.

Since 2019, the two forces have accused each other of violating the ceasefire agreement around 5,000 times. Nevertheless, in February this year, the two armies agreed to stop the firefight along the border completely, including the Line of Control which divides disputed Kashmir between the two countries.