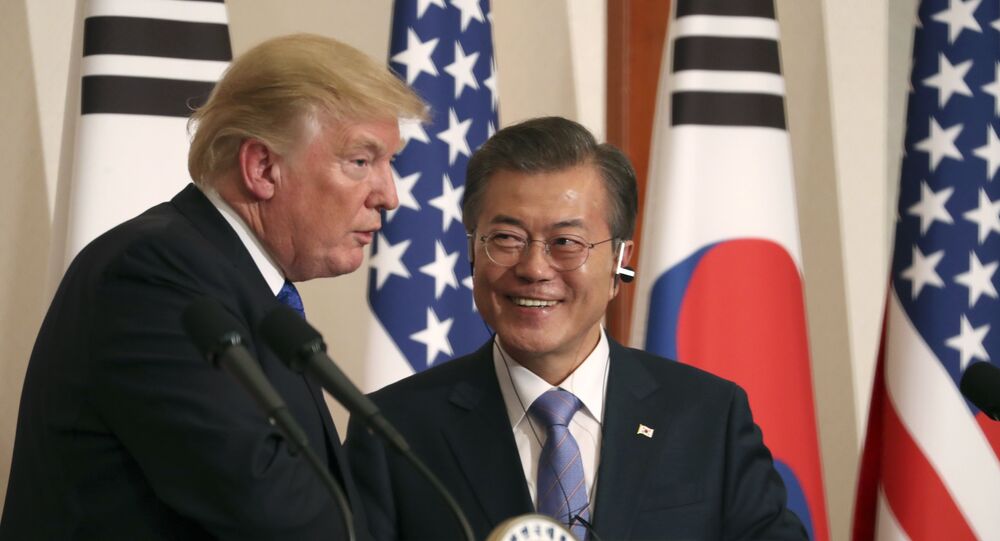 The former Republican president repeatedly criticised South Korean authorities during his term in office. Trump argued that Seoul has to increase payments to Washington for the US troops that are stationed in the country to protect it from its neighbour North Korea.

South Korea will not respond to Donald Trump’s harsh attack on President Moon Jae-in, The Korea Times reported, citing a government official. "It is not appropriate to comment on former foreign leader's statements. We had negotiations, abiding by principles", the official said, referring to talks on improving relations with North Korea.

Last week, the Republican slammed Moon Jae-in as a "weak" leader and negotiator.

"We were treated like fools for decades, however, I got them to pay billions of dollars more for the military protection and services we render. The Biden administration is not even going to ask for the additional billions South Korea agreed to pay us", Trump said.

His statement apparently was a response to the remarks the South Korean president made in an interview with The New York Times. Moon negatively assessed Trump’s attempts to denuclearise North Korea.

"He beat around the bush and failed to pull it through", Moon Jae-in said, emphasising that incumbent US President Joe Biden should kick-start negotiations with Pyongyang.

Relations between the United States and North Korea had ups and downs under Donald Trump. In 2017, at the beginning of his term, the Republican threatened to unleash "fire and fury" on Pyongyang. However, a year later Trump held three meetings with Kim Jong-un and became the first sitting US president to set foot in North Korea.

Critics say, however, that the thaw in relations failed to push North Korea towards denuclearisation. Relations between North and South Korea deteriorated towards the end of Trump’s term and Pyongyang continued to conduct missiles tests.