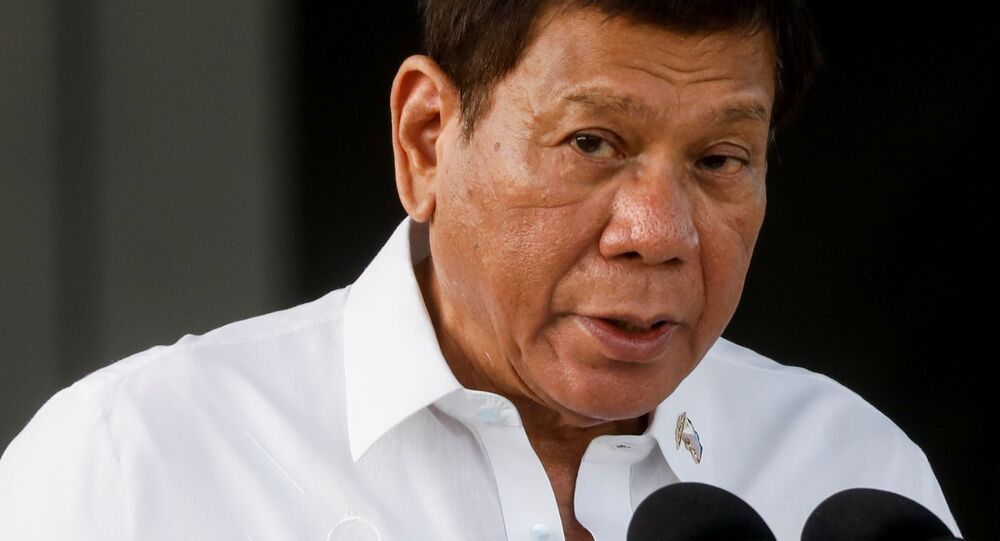 The Permanent Court of Arbitration in The Hague, Netherlands, ruled in 2016 that China has no legal basis to claim the majority of the sea located between western Philippines, Vietnam, Malaysia, Brunei and Taiwan. Beijing subsequently deployed hundreds of Chinese naval vessels into territorial waters exclusive to the Philippines’ economic zone.

Rodrigo Duterte, the president of the Philippines, responded to the presumed military threat from China in a televised Monday speech, claiming “there is no other way but a war.” Duterte threatened to deploy his own warships, saying he does not see the conflict ending “without any bloodshed.”

"We can retake it only by force. There is no way we can get back what they call the Philippine sea without any bloodshed,” Duterte told his cabinet members, including Defense Secretary Delfin Lorenzana. “You know the cost of war.”

The Philippine president went on to say that a conflict “would be bloody,” and that it may “result in a violence that we cannot maybe win."

The televised address marked the first time that Duterte has publicly acknowledged the swarms of Chinese ships currently occupying the Julina Felipe Reef, a coral reef that is miles west of the archipelagic province of Palawan, as well as other parts of the West Philippine Sea.

“Just to show the Filipino that no matter how many times we go back there, nothing will happen because we are not in the possession of the sea,” he repeated, asking Lorenzana if it would be possible for him or a team to venture into the Chinese-occupied Whitsun Reef, which is located in the South China Sea’s Spratly Islands.

Lorenzana replied by stating there was no obstacle presented by China that would block them from carrying out such an operation, and that even their Navy ships can travel to conduct their usual resupply missions to the islands of the Kalayaan Island Group.

Duterte held on to his belief that the presence of Filipino ships on the Western Sea would only be allowed by order of the Chinese because “in their mind, it’s theirs.”

The Philippines’ Department of Foreign Affairs (DFA) has issued numerous diplomatic protests over what they claim to be the illegal presence of Beijing’s maritime militia, calling on the Chinese Embassy in Manila to address the issue.

“The continued presence of Chinese maritime militias in the area reveals their intent to further occupy features in the West Philippine Sea,” Lorenzana wrote in the statement. “They have done this before at Panatag Shoal or Bajo de Masinloc and at Panganiban Reef, brazenly violating Philippine sovereignty and sovereign rights under international law.”

“As a party to the [Declaration on the Conduct of Parties], China should refrain from conducting activities that disturb regional and international peace and security,” it continued.

Duterte has refuted suggestions from retired Supreme Court Justice Antonio Carpio, who believes that an order from the United Nations may be the pressure China needs to respect Philippine sovereignty. Duterte, during a pre-recorded cabinet meeting aired on Monday, referred to Carpio as a “dreamer” who runs his mouth and reaffirmed previous warnings that he would become more assertive if China started to excavate material resources out of the disputed sea.

"When they get the oil, nickel, or whatever precious stones, that would be the time [to act] because that is the time that we should act on it,” Duterte said at the meeting, adding, “I will also start to drill my oil there. If you own it, I own it.”

Duterte last raised concerns to the United Nations about China’s occupation of the disputed waters during the 75th UN General Assembly back in 2020, raising a red flag over the presumed threat of war. Since then, Duterte has been silent over the issues and expressed doubt that China would leave the West Philippine Sea, even if the UN compelled it to do so.

"The Chinese government will just give you a finger. You cannot scare them because they firmly believe that it is theirs contrary to our...opinion that it is ours," the president said during a pre-recorded public address last Monday.

The Philippines, as one of the US’ oldest allies in Asia, can invoke its Mutual Defense Treaty with the US, but only if the country is attacked or assaulted. This possibility only adds to the ongoing build-up of tension between the US and China.

Late last week, the Philippines sent four of its warships into the Julian Felipe Reef, along with warplanes and two missile-guided frigates. In a show of power, the US also sent the aircraft carrier USS Theodore Roosevelt along with an escort of submarines, destroyers, cruisers, and dozens of aircraft. The US also deployed the USS Makin Island, an assault ship that has its own barrage of escorts.

Chinese vessels have since dissipated respecting the show of force, but not showing signs of completely backing down.