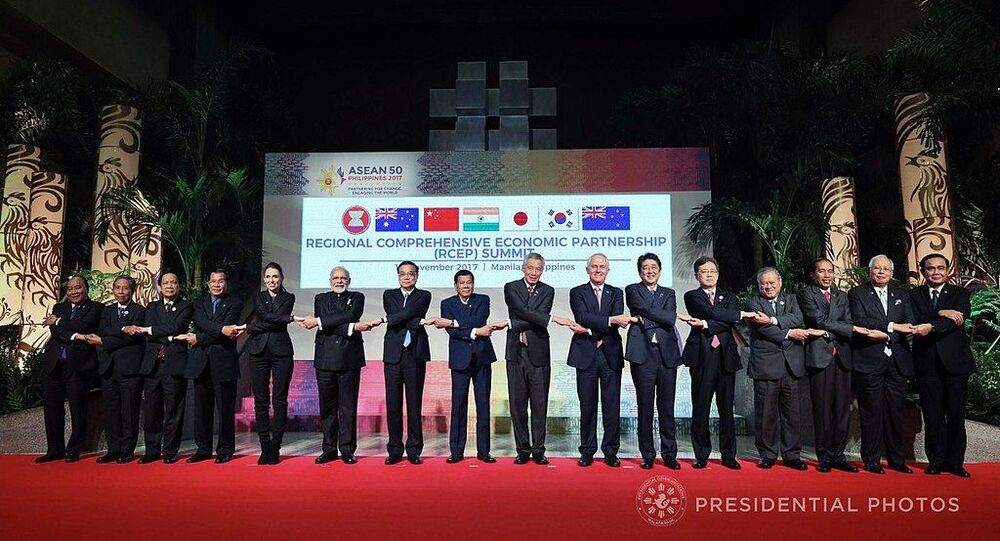 Former US President Donald Trump claimed his protectionist policies were in defense of American workers, but even while his successor, Joe Biden, has pledged to chart a separate course from Trump, he has made many of the same domestic economic promises.

At the Boao Forum for Asia in China’s Hainan Province over the weekend, a former leading Chinese diplomat suggested Washington could play a key role in uniting two Pacific-centered free trade agreements, if only it would join them.

Long Yongtu, a former Chinese vice-minister of international trade who led the country’s negotiations to join the World Trade Organization in 2001, said in Boao on Monday the recently inaugurated Biden administration could “adopt a more positive attitude towards multilateralism” by rejoining the Comprehensive and Progressive Agreement for Trans-Pacific Partnership (CPTPP) “so that the entire Asia-Pacific region will be very happy,” according to the South China Morning Post.

“The participation of the US would definitely be good news for the Asian regional economic integration. We need to convey such a message to the US president,” Long said, adding, “if the US cannot become a part of the Asia-Pacific trade agreement, it will be a heavy blow to the unity and cooperation of the entire Asia-Pacific region.”

Under former US President Barack Obama, Washington played a formative role in drafting the Trans-Pacific Partnership (TPP), but just three days after Donald Trump took office in January 2017, he pulled the US out of the agreement as part of what became a wide-reaching protectionist policy. The remaining 11 signatories later agreed to revive the deal as the CPTPP without the US, which included shredding nearly two dozen provisions the US had included but other states didn’t want.

Although significantly larger than CTPP, the RECP agreement contains significant overlap in terms of membership, although with the important addition of the People’s Republic of China. Several US allies and partners, including Japan, South Korea, Australia and New Zealand, are a part of both deals. Signed in November 2020, the deal contains 30% of the world’s population and 30% of its gross domestic product, making it the largest trade deal in history.

“The ball is in the US’ court,” Long said. “If the US adopts a positive attitude towards regional cooperation in the entire Asia-Pacific region, the prospect of merging the RCEP and TPP will be a matter of course.”

In November, Chinese President Xi Jinping said Beijing was “actively considering” joining the CPTPP. However, it’s unlikely US President Joe Biden will do so, much less consider joining the RCEP. When the deal was signed in November, Biden said the US should gather like-minded nations and present trade terms to China, instead of letting Beijing set the agenda.

"We make up 25% of the world's trading capacity, of the economy of the world. We need to be aligned with the other democracies, another 25% or more, so that we can set the rules of the road," Biden said on November 7, according to Nikkei Asia, "instead of having China and others dictate outcomes because they are the only game in town."

Biden’s approach is notably similar to one pitched that same month by Trump’s State Department, which advocated a multi-faceted “containment” strategy for the US’ struggle against China, along the lines of the US’ Cold War approach to the Soviet Union.

That document called for Washington to fortify the “rules-based international order” the US created after World War II, which it alleges China is attempting to subvert by its own rise, and to “reevaluate its alliance system and the panoply of international organizations in which it participates” to ensure they support the US’ efforts.

To that end, the US has similarly tried to present itself as enforcer of the UN Convention on the Laws of the Sea - even though Washington has never signed the agreement - by performing “freedom of navigation operations” through China’s claimed areas in the South China Sea. By presenting China as a military threat to Southeast Asian nations, the US is attempting to pull those nations into its own orbit and head off a potential diplomatic reconciliation between them and China. One hawkish but influential DC think tank even proposed sabotaging the existing Code of Conduct negotiations between China and members of the Association of Southeast Asian Nations, then draft its own with regional partners and impose it on Beijing.