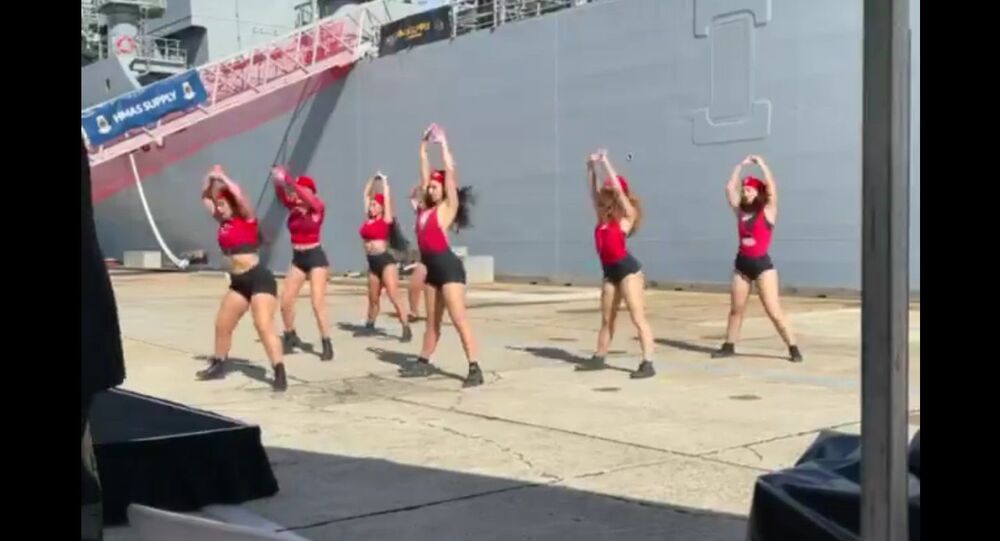 While some criticised the decision to hire dancers, others directed their ire at the media coverage of the performance, with Australian Prime Minister Scott Morrison voicing his disappointment with “misreporting” by a certain outlet.

The launch of the newest addition to the Australian navy, the HMAS Supply, has apparently attracted quite a bit of attention thanks to a dancing troupe performance during the ceremony on 10 April.

The video of the performance, which has since gone viral, shows the female dancers clad in berets, red crop tops and black shorts performing a routine that includes twerking.

The performance has attracted quite a bit of criticism over exactly how appropriate it was at such a ormal occasion, with Australian politician and army veteran Jacqui Lambie calling the decision to hire the dancers “an absolute shocker.”

​"Good on those young ladies for getting out there, but I tell you, being half-clothed outside a warship is probably inappropriate," she said, as quoted by BBC.

Some social media users, however, seemed more amused than offended with this situation.

​The Australian Broadcasting Corporation (ABC) also ended up catching flak after showing a video that cut between shots featuring the dancers and the dignitaries who attended the event, including Governor-General David Hurley, Queen Elizabeth's representative in Australia.

A spokesman for the Australian Defence Force, however, has revealed that Hurley had not arrived at the time of the dancing performance, while the dancers, the so called 101 Doll Squadron, branded the ABC report as “deceptive”.

"The media outlets, which purport to support women, have been the most virulent," the troupe complained in a statement.

Australian Prime Minister Scott Morrison also expressed his disappointment with the aforementioned “misreporting”, saying: "I think that was disrespectful to the performers to suggest the Governor-General or others were in attendance."

ABC has since apologised for the error, saying in a statement that it had updated the footage to reflect the fact that that the Governor-General and Chief of Navy were not in attendance during the dance.