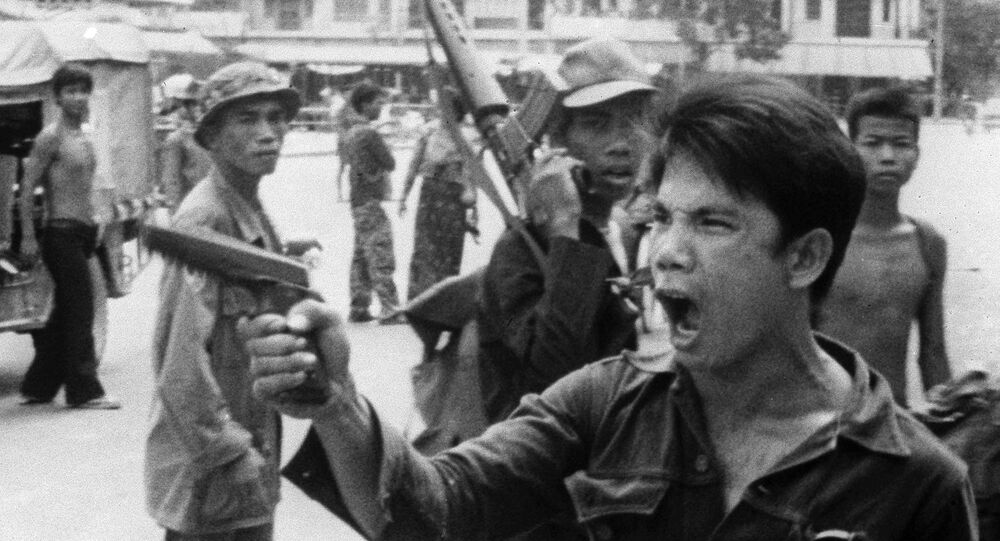 US media group Vice on Friday published an interview with Ireland-based artist Matt Loughrey, who had colourised images of photos from the notorious Tuol Sleng S-21 torture prison in Phnom Penh, hailing the rule of agrarian-communist state’s leader Pol Pot, which is estimated to have killed around 1.7 million people.

In an escalating row over the allowed limits to the manipulation of historical images, Cambodians on Monday continued to censure the recently aired ‘altered’ photographs of victims of their country's 1970s genocide.

US media group Vice on Friday published an interview with an Irish photo restorer Matt Loughrey, who had colorized original black and white photos of prisoners of the Khmer Rouge's notorious S-21 prison in Phnom Penh.

Loughrey was cited by Vice as revealing that he had been hired by family members of some of the victims of the notorious prison, where an estimated 17,000 people suspected of being enemies of the ruling regime were jailed and tortured prior to their execution, to colourise photos of their loved ones.

Subsequently, the artist proceeded to alter more images from what is now the Tuol Sleng Genocide Museum.

As several colourised photos accompanying the article showed S-21 prisoners smiling for the camera, Loughrey said in the interview:

“The women tended to have a smile on their face more so than the men… I think a lot of that has to do with nervousness.''

After the article came out, readers, social media and organisations levelled heavy criticism at the artist, who was accused of adding smiles to some of the shots.

Professional photographer John Vink, who has worked in Cambodia, also voiced concerns that in at least some of the original photos, the subjects were not smiling, and Loughrey had retouched them to alter their expressions.

Vink went on Twitter on Saturday to denounce the fact that the restorer saw fit to ‘falsify history’.

Matt Loughrey in Vice is not colourising S21 photographs. He is falsifying history: pic.twitter.com/z6J99J7BOE

​Both the efforts of an Irish photo restorer to allegedly portray the people ‘smiling’ at the camera, and the decision of the an international media group to publish them were denounced as deplorable judgement.

“To imagine the smiling faces of victims of the Khmer Rouge, your judgement then must be horrible,'' Youk Chhang, director of the Documentation Center of Cambodia, was cited by AP as saying on Monday.

The centre, which conducts research on the Khmer Rouge regime, boasts a vast trove of documentary evidence dating to the atrocities committed by the Khmer Rouge, who are blamed for the deaths of an estimated 1.7 million of their countrymen.

Coming to power in the aftermath of the American bombing of Indochina, the Khmer Rouge overthrew the US-installed military dictatorship of Lon Nol, with the prime minister, Pol Pot, seeking to return Cambodian society to a form of ‘primitive communism’.

Hundreds of thousands of educated people, academics, doctors, and other professionals were tortured and killed, while those residing in urban centres were forcibly relocated to farming collectives in rural areas.

Social media users in Cambodia similarly voiced outrage, with signatures solicited for an online petition demanding Vice take down the story, and that an apology be demanded from Loughrey.

I don’t know how I feel, the actions of the Matt Loughrey and @viceasia @vice really hurt me, my mother and the entire Cambodian community that still deeply suffer from the brutality of the Khmer Rouge.

​Cambodia's Ministry of Culture and Fine Arts issued a statement on Sunday, saying it "does not accept this kind of manipulation, and considers this work of Matt Lougnrey to seriously affect the dignity of the victims, the reality of Cambodia's history, and in violation of the rights of the Museum as the lawful owners and custodians of these photographs".

It also warned it would resort to legal action unless Loughrey and Vice took the images offline.
"We urge researchers, artists and the public not to manipulate any historical source to respect the victims,'' said the ministry.

Vice has since removed the article off its website, saying in a statement that it "included photographs of Khmer Rouge victims that Loughrey manipulated beyond colourisation". It added that it was investigating the issue.