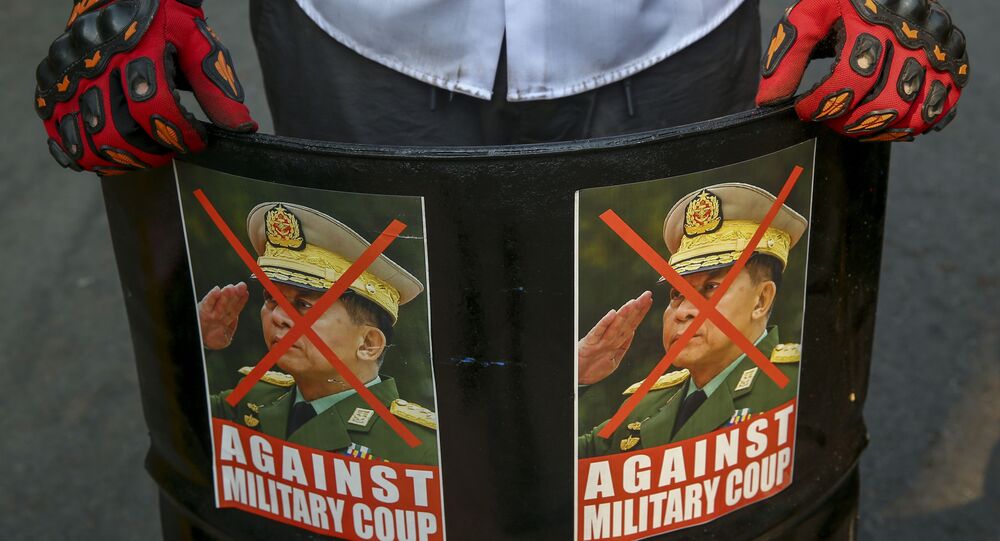 MOSCOW (Sputnik) - UK Foreign Secretary Dominic Raab on Thursday denounced the Myanmar military for their alleged involvement in the blockage of the country's embassy in London.

"We condemn the bullying actions of the Myanmar military regime in London yesterday, and I pay tribute to Kyaw Zwar Minn [Myanmar ambassador to London] for his courage. The UK continues to call for an end to the coup and the appalling violence, and a swift restoration of democracy", Raab tweeted.

Raab's comment comes in response to what Kyaw Zwar Minn described in an interview with The Telegraph as the seizure of the Myanmar Embassy in London by allies of the country's military junta.

According to media reports, the ambassador on Wednesday attempted to get inside the building of the embassy but failed to do so. Besides this, some of his personnel remained in the embassy, unable to come out.

© REUTERS / STR
Protesters march with makeshift shields on a main road during a demonstration in Mandalay, Myanmar, Monday, March 8, 2021. Large protests have occurred daily across many cities and towns in Myanmar.

According to a source interviewed by CNN, at least seven people, including a child, were locked inside the building.

Following the takeover, the junta declared a one-year state of emergency in the country. However, mass protests followed in response to the coup, leading to violent clashes with the military and repression against peaceful demonstrators.