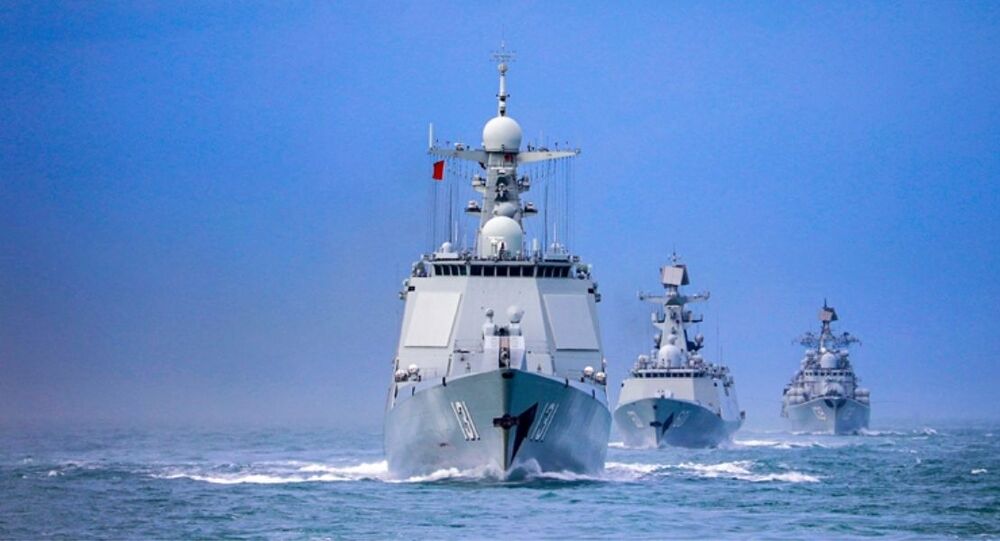 The Chinese People's Liberation Army (PLA) recently held combat-oriented naval exercises featuring different types of warships in three major sea areas, at a time when the US secretary of defense is rallying allies in the region and attempting to foster "credible deterrence" against China.

In the Yellow Sea, Type 056 and Type 056A corvettes Wuhai, Datong and Yingkou formed a flotilla and practiced training courses including main gun shooting, secondary gun shooting and air defense by launching flares. In the East China Sea, Type 052C destroyer Jinan and Type 054A frigate Changzhou ran more than 10 training missions including free combat among warships, submarines and warplanes, and joint fire strikes. In the South China Sea, different types of tug and support ships held maritime search and rescue and emergency towing exercises, according to the CCTV report.

The PLA Southern Theater Command also held another exercise in the Beibu Bay, west of the Leizhou Peninsula in the South China Sea, as sailors on Sunday paid respects with their actions to heroes who emerged victorious in the Chigua Reef Skirmish on March 14, 1988 against Vietnam, the command said in a statement on Sunday, the 33th anniversary of the event.

The intensive PLA naval exercises came as US Defense Secretary Lloyd Austin said on Saturday that he was on a visit to Asia to boost military cooperation with US allies and foster "credible deterrence" against China, AFP reported on Sunday.

Austin's trip is to include meetings with key allies in Tokyo, New Delhi and Seoul, the report said.

China assesses the security circumstances that it is now facing as unstable and uncertain, largely due to political and military threats from the US, so the PLA must be prepared to safeguard China's sovereignty, security and development interests, a Beijing-based military expert told the Global Times on Monday, requesting anonymity.

In 2020, US military activities in the South China Sea that aimed to deter China were unprecedented, Beijing-based think tank South China Sea Strategic Situation Probing Initiative said in a report on Friday, which presented incomplete statistics of the US operations.

Director of the think tank Hu Bo told the Global Times that the US will likely continue to rally regional allies and partners to interfere in regional affairs and enhance its frontier military presence, as well as the intensity of its activities in the region, in an effort to achieve maritime containment of China.

The article was originally published on The Global Times.