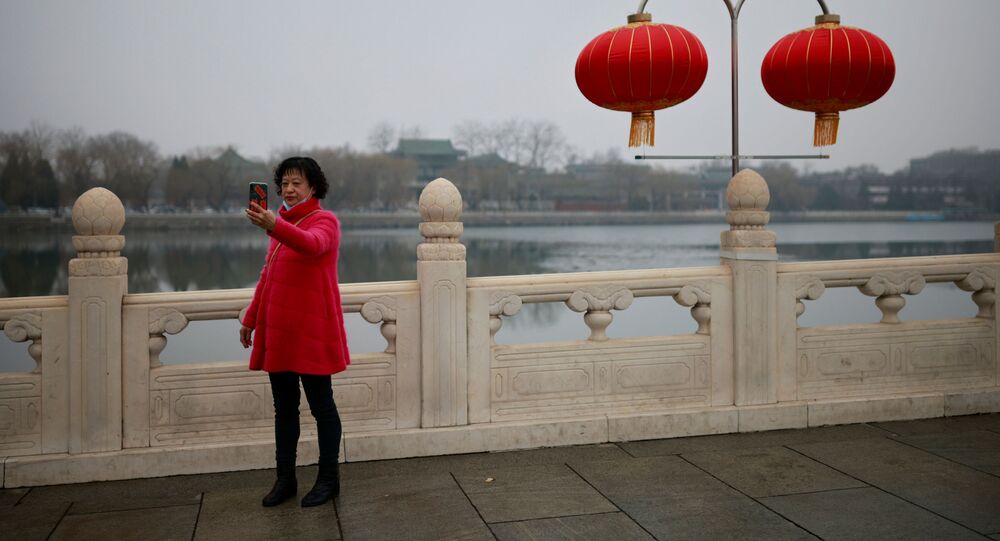 After being enveloped by sand and dust for a whole day on Monday in the largest sandstorm in a decade, Beijing has cleared up and the yellow warning for sandstorms was lifted on Tuesday morning, with the city a picture of blue skies and sunshine.

China’s Central Meteorological Observatory continued to issue blue dust storm warnings on Tuesday morning, as cold air and strong winds brought the powerful sandstorm which started from Mongolia southward, and will continue to hit central and southern China as far as Anhui and Jiangsu provinces from Tuesday until Wednesday morning.

The Air Quality Index (AQI) rose to 500 in most provinces, indicating that they will experience severe sand pollution.

© REUTERS / Thomas Peter
Skies Over Beijing Turn Yellow Amid Monstrous Dust Storm - Photos, Videos
According to weather monitoring, more dusty weather is likely to hit 17 provinces in China from Friday to Saturday with the return of cold air.

A powerful sandstorm originally from Mongolia swept across much of northern China on Monday, creating the strongest and most extensive sandstorm in the country in a decade, sparking many to question why China's "Green Great Wall" did not work and why this wave of sandstorm passing from the neighboring country has such a huge impact on China.

The sandstorm hit 12 provinces in northern China from west to east as it entered Chinese territory from the southwest part of neighboring Mongolia since late Sunday afternoon with the air flow.

© AP Photo / Mark Schiefelbein
A woman walks along a pedestrian bridge amid a sandstorm during the morning rush hour in the central business district in Beijing, Monday, March 15, 2021

Chinese analysts said the role of China's Three-North Shelterbelt Forest Program (TSFP) set up in northwest, north and northeast China, known as "great green wall," is to block the drifting dust within the forestation zone. It cannot stop the desert and Gobi areas from having sand dusts. The impact of shelterbelt projects is limited if the substances of the sandstorm do not originate from the local area but from far away regions, like this one from Mongolia.

To fundamentally solve its root cause, global cooperation is needed in dealing with desertification, they said.

Residents in Beijing woke up Monday morning to find the entire city enveloped in yellow dust. Many said they wondered whether their eyes were blind. Skyscrapers were barely visible and the streets appeared to be covered by an old-fashioned filter.

Some optimistic netizens swarmed to social media platforms, making fun of the dust storm they haven't seen in years.

Many joked that they had an illusion that the clock was scrolled back to 2009 when Beijing had suffered from severe dust storms, and the movie Avatar was on display in cinemas (Avatar is now back with a surprise second screening in China).

The visibility in most areas of Beijing was less than 1,000 meters and bringing the PM10 close to 10,000 micrograms per cubic meter in the city center on Monday morning.

The capital issued a yellow warning for sandstorms at 7:25 am, the Beijing Meteorological Observatory said Monday, warning the public to take suitable precautions. With a yellow warning, the public are encouraged to suspend any outdoor activities and to wear protective masks.

As of press time, the dust storm has led to the cancellation of at least 54 flights at two airports in Beijing and 52 flights in Taiyuan, North China's Shanxi Province.

Taiyuan had also been enveloped in dust from Monday morning with visibility only at 700 meters, and the speed reached 15 meters per second.

While powerful sandstorms have hit northern China, the neighboring country Mongolia had reported a strong snowstorm and sand dust weather over the weekend in multiple provinces.

The neighboring country reported 10 deaths, including a five-year-old boy, and 590 reports of missing persons had been filed. As of 5:00 pm, one was still missing, the agency reported.

The weather damaged at least 58 yurts of residents, destroyed more than 120 households, and some 1,200 livestock were blown away, the agency said. Multiple routes of electric cables were cut off causing power outages in provinces such as Uvs and Khentii.

Ulaanbaatar, the capital city of Mongolia, was enveloped in thick sand. The dust storm in the capital lasted about three hours before cold air from the northwest moved the dust southward, the Global Times learned.

China's Central Meteorological Observatory called the sandstorm on Monday the most intense sand-dust weather process in China in the past decade, and the range of sand dust storms was also the widest in the past 10 years.

The strong sand and dust was likely to continue during the day on Monday and see a downward trend late tonight.

It seems that the frequency of sandstorms has subsided in recent years, but what caused the strong sand dust weather on Monday and why did the shelterbelt that China set up in the northern part of the country fail to stop this wave of sandstorm from Mongolia?

Wang Gengchen, a research fellow at the Institute of Atmospheric Physics of the Chinese Academy of Sciences, told the Global Times on Monday that sand source, cyclone and flow movement are the three factors to form sandstorms. It is just the powerful cyclones that a large amount of dust in Mongolia was sucked into the high altitude, and pressured by cold anticyclone, the dust eventually transported to Chinese territory from Mongolia.

Shelterbelts have proven effective in reducing the frequency of sand and dust weather in Northern China over the past years, but it has a very limited effect when there is a large-scale wind field, and especially on strong weather processes like this, Wang noted.

Shelterbelts will reduce the amount of dust within the shelterbelt area, preventing sand drifting, but it cannot stop desert and Gobi areas with forestation projects from having sand dust, which is the reason why shelterbelts did not stop this wave of sandstorm from Mongolia.

Shelterbelts play a role in reducing sand and dust weather, but cannot overcome sandstorms, experts said, which lies on the prevention and control of the sand source, experts said.

Due to global warming and excessive development, Mongolia's ecological problems have become increasingly prominent. Some 70 percent of the country's land is facing desertification in various degrees, and it is showing a trend of continuous expansion.

Mongolia is a traditional animal husbandry country with more than 70 million livestock in 2020. Its overgrazing has caused grassland degradation. Other manual factors such as disordered exploitation of mineral resources also accelerated the process of grassland desertification.

© AP Photo / Jeremy Hainsworth
Over 80 People Missing, 6 Killed in Dust Storm in Mongolia, Reports Say
The Mongolian government has implemented more than 20 environmental protection plans but these have not achieved obvious results in terms of desertification control, the Global Times learned. For example, coal from mines in the Gobi region of Mongolia is transported to the port by land, causing great damage to the grassland environment in the Gobi region.

Research has shown about half of China's sandstorms come from dust in Mongolia, meaning the prevention and control of sand dust weather is a mission that cannot be achieved without global environment cooperation, Chen Guangting, a research fellow at the Cold and Arid Regions Environmental and Engineering Research Institute of the Chinese Academy of Sciences, told the Global Times.

This sandstorm originating from Mongolia is expected to drift into South Korea through the north wind on Tuesday morning. Some South Korean media sensationalized their stories by bringing up "China" in their headlines and posting pictures of Beijing in their articles. Reports like this sparked the emotions of South Korean netizens, with some blaming China for bringing the pollution to South Korea.

Chinese observers pointed out that it has been the usual practice of South Korean media to use China as the scapegoat whenever these are sandstorms and air pollution.

Given that the disastrous weather is a common enemy for many East Asian countries, observers stressed that only when meteorological agencies and media report the weather work in an objective and scientific way, nations are more likely to join hands to overcome the problem, rather than making extreme weather a tool to provoke public opinion.