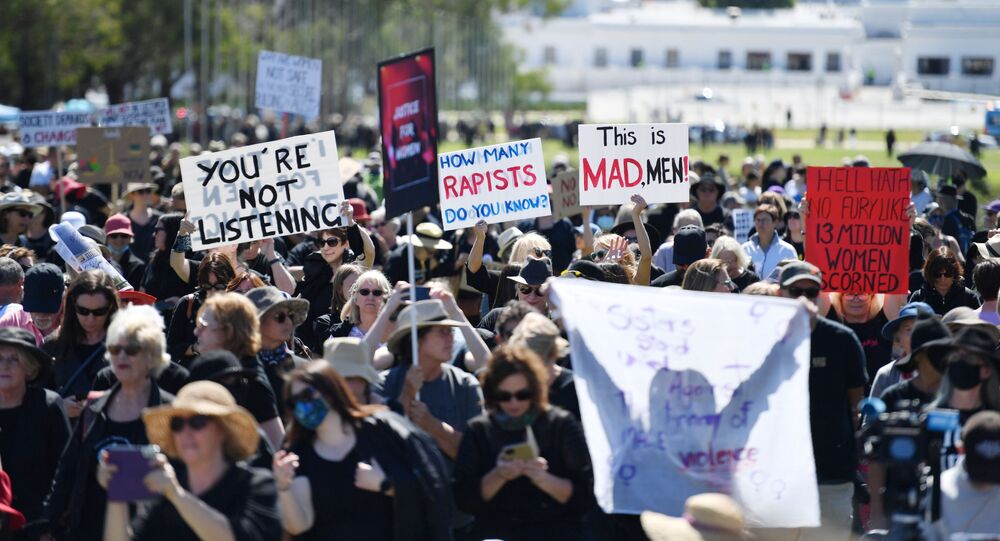 The country has been rocked by news of sexual assault allegations since a former Liberal Party staffer claimed she was raped by a male colleague in the office of incumbent Defence Minister Linda Reynolds.

Tens of thousands of people have taken to the streets in Australia to protest against sexual harassment and assault against women, with the organisers of the demonstrations telling local media it could be the "biggest uprising of women" the country has seen. The protests dubbed "March For Justice" occurred in 40 cities, including Brisbane, Melbourne, Perth, and Sydney.

​In the capital Canberra demonstrators holding placards reading "enough is enough" and "justice" marched to Parliament House, where the government and Prime Minister Scott Morison are located. Many accused officials of an inadequate and slow response to sexual assault allegations against government officials.

"F**k the misogynistic self-entitled religious-right parliament", read one of the placards

"Too many D**ks in the cabinet", read another.

Laura made a powerful statement with her appearance & message. She has been strong voice for #feminism #womensrights #equality all her life. We are all so tired of waiting #EnoughIsEnough so we #March4Justice pic.twitter.com/2AT1kZkZcW

​Protesters demanded that Prime Minister Scott Morrison and the minister for women meet them at the rally. Morrison declined the invitation and instead invited a delegation of protesters to a meeting in parliament. Most government lawmakers declined to attend the protests.

What Sparked the Protests?

The development comes as the country's government has been rocked by multiple accusations of sexual assault. The scandal started in the middle of February when a former Liberal Party staffer, Brittany Higgins, claimed she was raped by a male colleague in 2019 in the office of Defence Minister Linda Reynolds.

Higgins alleged that the incident occurred following a work party. Because she was heavily drunk she fell asleep in the minister's office. She claims she woke up to find the man sexually assaulting her. The purported criminal was fired in the following days, though not for his actions, but for breaching security protocol (for making a late-night visit to the government building).

Higgins claims she informed her boss, Defence Minister Reynolds about the incident. The latter said she offered support to Higgins to contact law enforcement. Higgins alleges that by doing so she would lose her job. The 26-year-old claims she was "silenced" by the Liberal Party and decided to speak only after seeing a photo of Prime Minister Scott Morrison with a survivor of sexual assault.

"He's standing next to a woman who has campaigned [for survivors' rights]... and yet in my mind his government was complicit in silencing me. It was a betrayal. It was a lie", she told news.com.au.

Higgins addressed the crowd of demonstrators in the capital Canberra and said that there are "significant failings in the power structures".

"There is a horrible societal acceptance of sexual violence experienced by women in Australia. My story was on the front page for the sole reason that it was a painful reminder to women that if it can happen in Parliament House, it can truly happen anywhere", Higgins said.

For the first time since breaking her story, Brittany Higgins speaks at the #WomensMarch4Justice: "We are all here today not because we want to be here, because we have to be here. We fundamentally recognise the system is broken." #AusPol @SBSNews pic.twitter.com/JLrP398rmz

Since Ms Higgins came forward several other women have accused government employees of rape and sexual assault. The most high-profile case involves the country's Attorney General Christian Porter. One woman claimed he raped her at a tournament at Sydney University in 1988 when she was 16. The alleged victim reported her complaint to the police in 2020, but that same year she took her own life, prompting the police to close the matter because sexual assault cases in Australia cannot proceed to prosecution without testimony from a victim.

The woman's friends wrote a letter to Prime Minister Scott Morrison asking him to re-launch an investigation.

At the end of February, members of the opposition Labour Party asked the police to conduct an investigation into Mr Porter. On 2 March, the police announced they had dropped the case because there was "insufficient admissible evidence to proceed".

Christian Porter has denied the allegations against him. He said he was never alone with the woman who accused him of impropriety.

"The things that are being claimed did not happen. Nothing in the allegations that have been printed ever happened", he told reporters in Perth on Wednesday.

Porter refused to step down, saying he has received full backing from Prime Minister Morrison to retain his post. He also said he would sue the Australian Broadcasting Corporation, which published letter by his accuser's friends.

How Has the Government Responded?

After Brittany Higgins came forward Prime Minister Scott Morrison apologised for the way her complaint was treated. The PM also vowed to conduct inquiries into the government's work culture and promised support for the staff. However, his statement that he understood Ms Higgins' experience better after his wife told him to think of their two daughters caused strong reactions, with women wondering why the PM was only able to empathise with Ms Higgins after his wife informed him about the plight of sexual assault victims.

Many people who attended the protests drew attention to this detail.

The fact that it's teenagers in their school uniforms holding these signs is making me very EMOTIONAL for multiple reasons. #March4Justice pic.twitter.com/XBOzK1CTxN

​Defence Minister Linda Reynolds, who described Ms Higgins as a "lying cow" to her staff, apologised to her and paid her compensation. There has been no information yet on the amount.

​The government continues to feel pressure from members of the public, with people criticising the slow and ineffective response to accusations of sexism, misogyny, and sexual abuse against its employees.