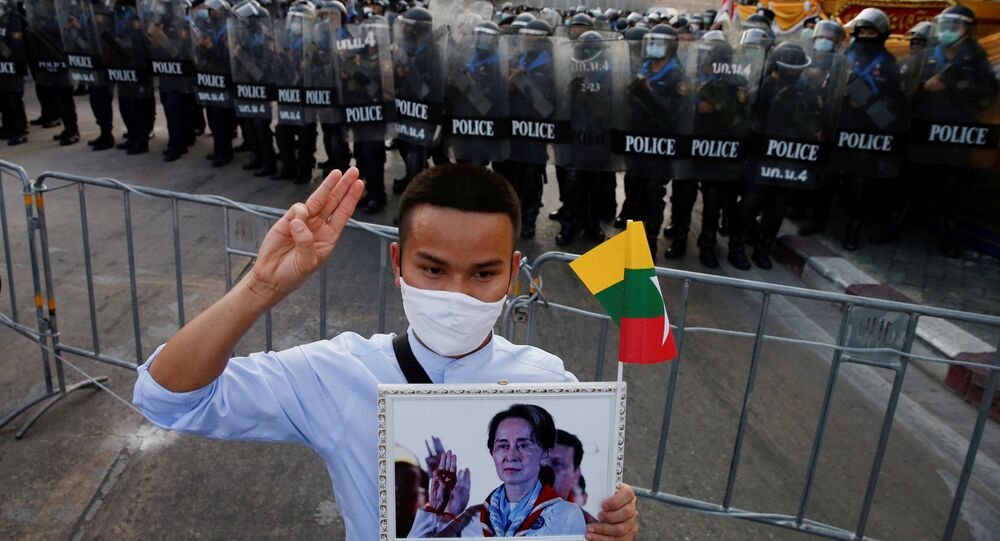 WASHINGTON (Sputnik) - The United States is preparing new measures against Myanmar in connection with the reported violence during the recent protests, US National Security Advisor Jake Sullivan said.

"We will continue coordinating closely with allies and partners in the Indo-Pacific region and around the world to hold those responsible for violence to account, and to reinforce our support for the people of Burma [Myanmar]. To that end, we are preparing additional actions to impose further costs on those responsible for this latest outbreak of violence and the recent coup," Sullivan said in a Sunday statement.

At least 18 people died across Myanmar on Sunday alone during clashes between police and protesters, according to the UN Office of the High Commissioner for Human Rights.

US Secretary of State Antony Blinken condemned the reported violence against protesters in Myanmar on Sunday.

"We condemn the Burmese security forces’ abhorrent violence against the people of Burma & will continue to promote accountability for those responsible. We stand firmly with the courageous people of Burma & encourage all countries to speak with one voice in support of their will," Blinken said on Twitter.

People took to the streets in multiple cities across Myanmar on Sunday as mass demonstrations against the military takeover in the country continued.

On February 1, Myanmar's military seized power in the country, announcing a one-year state of emergency and vowing to take action against alleged voter fraud during the November 8 general election.

Myanmar’s State Counsellor Aung San Suu Kyi, as well as President Win Myint and other top officials who were members of the ruling National League for Democracy (NLD) party were detained and accused of election fraud.

The military said it was committed to the democratic system and vowed to hold new and fair elections after the state of emergency ends.

Protests have been held across Myanmar since the military took over. The US and the UK have imposed sanctions against multiple individuals affiliated with Myanmar’s military.

Last week, the US government sanctioned Lieutenant General Moe Myint Tun and General Maung Maung Kyaw. According to the Burmese military, the two men had been appointed members of the State Administration Council.

Facebook Bans Myanmar's Military From Its Platforms Weeks After Coup