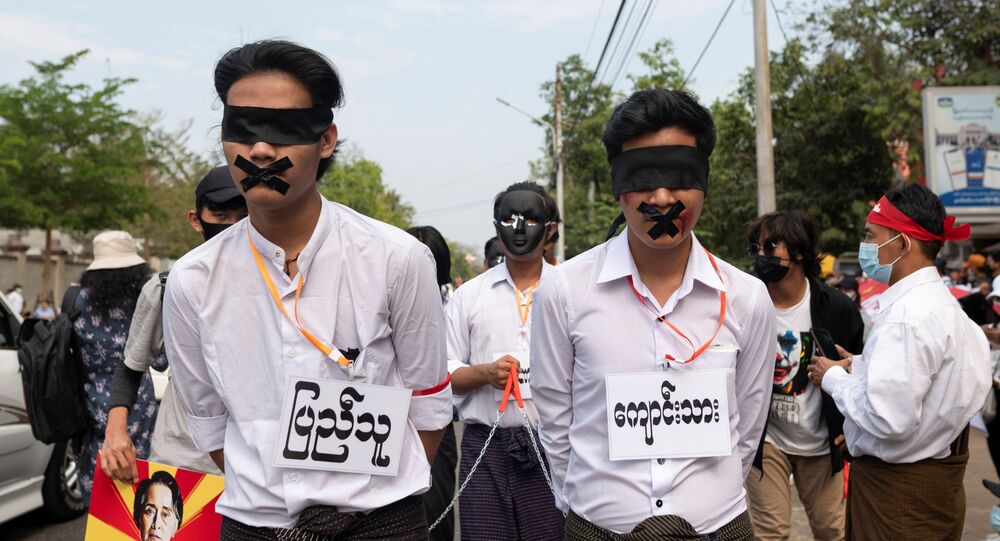 According to the data, the operation of Internet services, as well as access to the worldwide web itself, is regularly blocked by the country's military authorities, who came to power as a result of a coup that took place on February 1.

The online encyclopedia Wikipedia has been blocked by the major network operators by the order of the military since Thursday, the traffic monitoring service of NetBlocks reported.

"NetBlocks metrics indicate that all language editions, as well as associated websites including Wikidata and the Wikimedia Foundation’s corporate presence are restricted on most of the country’s major network providers. The restrictions are targeted and are distinct from general outages and disruptions tracked during the reporting period," the service stated.

Confirmed: #Myanmar has blocked all language editions of the Wikipedia online encyclopedia, part of a widening post-coup internet censorship regime imposed by the military junta 📚

According to NetBlocks, the military has not provided any reason for blocking one of the world's largest encyclopedias, suggesting that the move follows the alleged policy under which the military government forbids the use of specific terms when referencing the coup d'état and the resistance movement.

"At the time of writing there are also indications of an “edit war” on the Wikipedia article for military ruler General Min Aung Hlaing in relation to his title and career," NetBlock added.

All language editions of @Wikipedia have been blocked in #Myanmar. https://t.co/m8NREEEVmq

​Later, NetBlocks reported that Myanmar has been experiencing its sixth consecutive night of near-total Internet blackouts. According to the organization, internet access has dropped to 13% from the normal level starting at 1 am local time.

⚠️ Confirmed: #Myanmar has entered a sixth consecutive night under internet curfew, with service cut at 1 am local time by military diktat 🕒📉

The blackout comes amid a spiralling regiment of restrictions limiting the free flow of information online.

Myanmar's military overthrew the government on February 1 and proclaimed a year-long state of emergency just hours before the newly elected parliament was due to convene. State Counselor Aung San Suu Kyi and President Win Myint have been put under house arrest along with other top officials accused of election fraud in the November 8 general elections.

The coup sparked widespread mass demonstrations against military rule. Protesters demand the immediate release of the detained officials and the restoration of the civil government. Demonstrators have clashed with police, who have used water cannons and rubber-coated bullets to disperse them. Several people have died as a result of the ongoing unrest.

Situation in Myanmar is 'Not What China Wants to See', Chinese Ambassador Says

Myanmar: Boris Johnson Vows to 'Ensure Those Responsible for Coup are Held to Account'