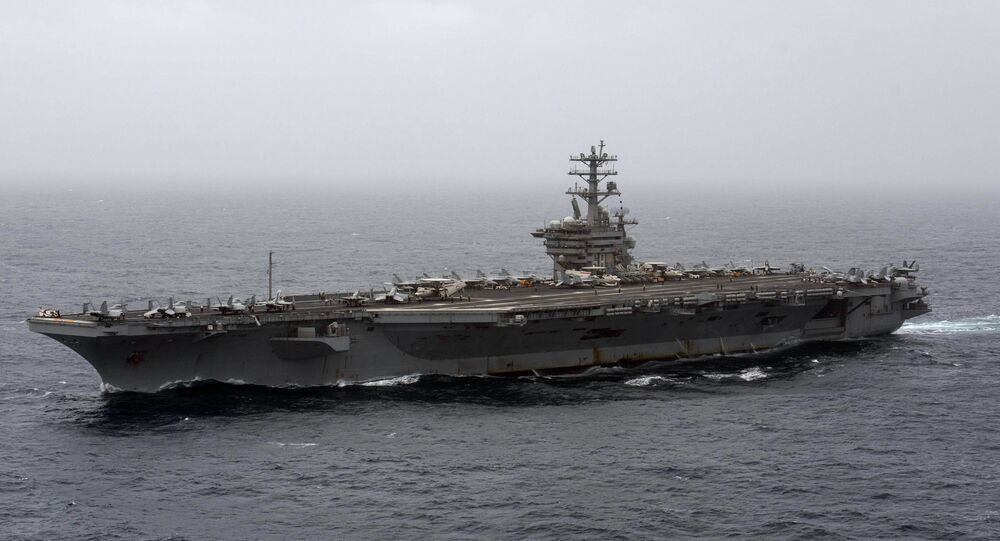 This is the third time a US-flagged naval ship has conducted an operation in the disputed South China Sea since US President Joe Biden assumed office and set China is Washington's crosshairs.

The Arleigh Burke-class guided missile destroyer USS Russell skirted the Chinese-controlled Paracel Islands in a freedom of navigation operation (FONOP) in the South China Sea on Wednesday, Spokesman for the US Navy's 7th Fleet Lieutenant Joe Keiley said in a statement.

"The United States upholds freedom of navigation as a principle. As long as some countries continue to assert maritime claims that are inconsistent with international law as reflected in the 1982 Law of the Sea Convention and that purport to restrict unlawfully the rights and freedoms guaranteed to all States, the United States will continue to defend those rights and freedoms," the statement read.

According to the statement, such maritime claims pose a serious threat to the freedom of the South China Sea, particularly freedom of navigation, overflight, free trade, and unimpeded commerce.

​Since Joe Biden assumed the presidency, the US has reaffirmed its commitment to allies in the Asian region, pledging to defend the disputed territories in the South China Sea and confront China on a wide range of issues, including the freedom of navigation.

Following the first phone call between the President Biden and the Chinese leader XI Jinping – during which POTUS challenged his counterpart on alleged human right abuses in Xinjiang, "coercive and unfair economic practices," and China's stance on Taiwan – Biden announced the formation of a Pentagon-run China task force to deal with the challenge from Beijing.

The Chinese government, for its part, has repeatedly denied allegations on human right abuses in Xinjiang and pledged to further open the Chinese economy to foreign competitors. Notably, President Xi Jinping stated that China would relax market access for some service industries and expand imports of high-quality services, according to his speech at the China International Fair for Trade in Services in September 2020.

Over the last weeks, US warships conducted multiple operations in the disputed South China Sea. On 4 February, the guided-missile destroyer USS John S. McCain steamed past a disputed island chain and sailed through Taiwan Strait. Less than a week after, US Navy aircraft carriers USS Theodore Roosevelt and USS Nimitz conducted joint ocean exercises. The Chinese government described these moves as “flexing muscles” without contributing to peace and stability in the region. At the same time, Beijing reaffirmed its intention to guard its sovereignty and national security in the disputed sea.

China claims sovereignty over much of the South China Sea and has built several military bases on artificially erected islands in the area, insisting that its so-called “nine-dash” demarcation line embraces around 90 percent of the sea, while other countries in the region have challenged China's stance and have sought redress with the US.

Philippines, Brunei, Malaysia, Taiwan, and Vietnam also have claims over the territories. The US views the South China Sea as an international route and challenges Beijing with patrols and drills by US and allied warships in so-called freedom of navigation exercises.