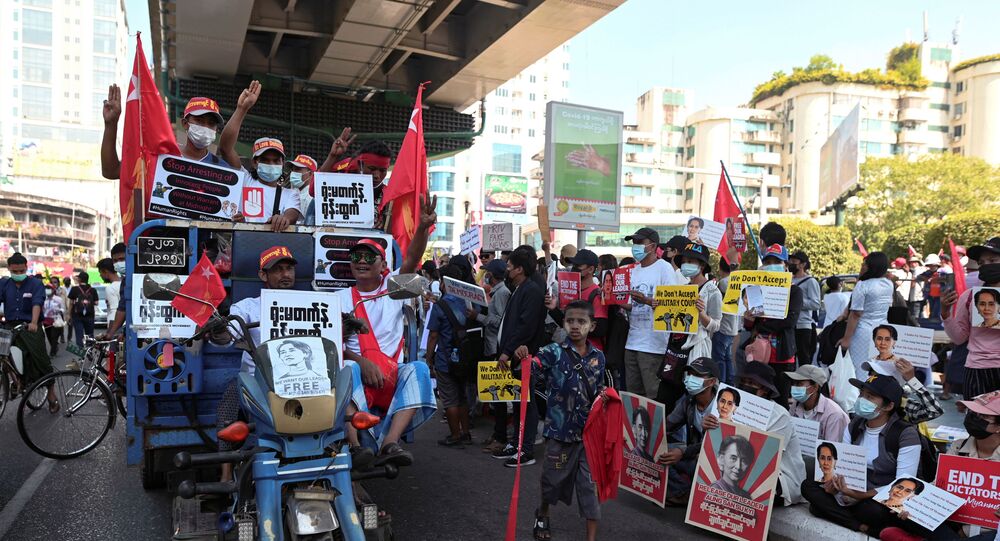 Earlier this month, Myanmar's Armed Forces introduced a year-long state of emergency and arrested State Counsellor Aung San Suu Kyi and members of her government, accusing the National League for Democracy (NLD) of electoral violations during the November 2020 vote.

Today, 14 February saw the ninth day of anti-coup rallies in Myanmar, with tens of thousands of protesters taking to the streets in the Southeast Asian nation's major cities.

In the biggest city, Yangon, engineering students staged a demonstration in support of National League for Democracy leader Aung San Suu Kyi, who has been under house arrest since she was detained on 1 February.

Myanmar Railways has completely stopped the whole country
Thank you all so much for participating CivilDisobedienceMovement 🙏🙏🙏#Feb14Coup #WhatsHappeningInMyanmar pic.twitter.com/fkP0Ae7m9g

Lovebirds in the protest!
Happy Valentine's Day everyone but in Myanmar, we still have to fight dictatorship!
FREE AUNG SAN SUU KYI!#WhatsHappeningInMyanmar #Feb14Coup pic.twitter.com/4Z3HTYC9Yp

The students marched through downtown Yangon with placards demanding the immediate release of Aung San Suu Kyi, whose detention is scheduled to expire on 15 February.

In separate developments on Sunday, a protest convoy on motorbikes drove through the capital Naypyidaw, while in the far northern city of Waimaw, demonstrators carried flags and sang revolutionary songs.

Lots of protesters were seen holding up images of Aung San Suu Kyi and carrying signs urging the authorities to "stop kidnapping people at night".

Youths protest peacefully in front of the U.S Embassy !!!

The demonstrations came as activist Wai Hnin Pwint Thon from the UK-based rights group Burma Campaign UK wrote on her Twitter page that "while the international community is condemning the coup, Min Aung Hlaing is using every tool he has to instigate fears and instabilities", in a nod to Myanmar's army chief.

She added that "the latest news about sending thugs to different townships are very troubling", an apparent reference to the military authorities' decision on Friday to pardon more than 23,000 prisoners, including 55 foreign citizens.

© AP Photo / Matt Rourke
Facebook Limits Distribution of Myanmar Military Content Following Coup
Many nations have already expressed condemnation of the Myanmar coup and restricted their ties with the country. The US introduced sanctions against eight military generals and three entities in Myanmar.

This followed the Myanmar Armed Forces detaining President Win Myint, State Counsellor Aung San Suu Kyi, and members of her government, accusing the National League for Democracy (NLD) of voter fraud during the November 2020 elections. The military declared a one-year state of emergency, pledging to hold a fair election when it is over.

Myanmar Police Use Water Cannon Against Anti-Coup Protesters in Naypyidaw