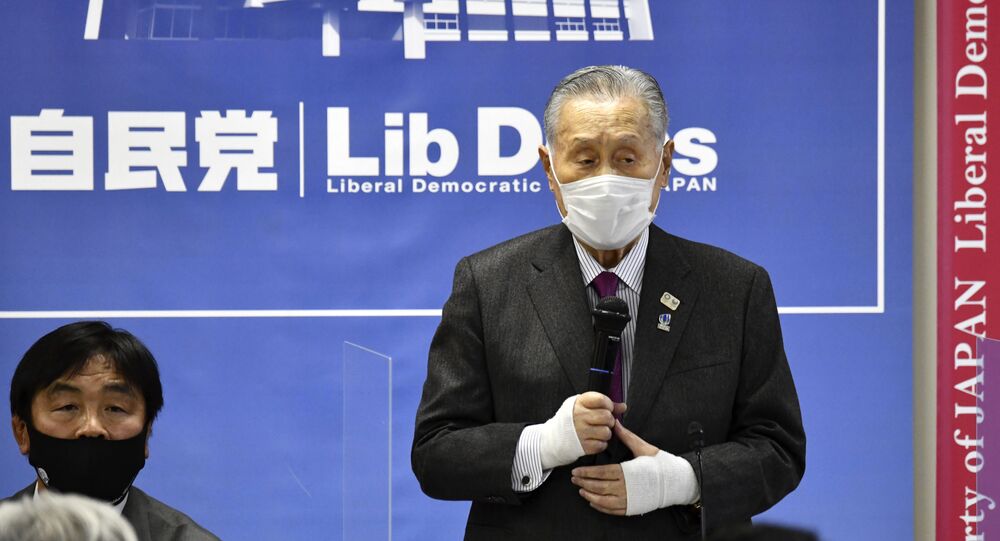 More Than a 1,000 Japanese Citizens Contact Gov't Over Sexist Remark Made by Head of Tokyo Olympics

This is not the first time that Mori has made controversial remarks. During his tenure as the country's prime minister he described Japan as a "divine nation" centered on the emperor, a view that runs counter to the country's postwar constitution.

More than a thousand Japanese citizens have called the government over a sexist remark made by Yoshiro Mori, the head of the Tokyo Olympics organising committee, the Kyodo news agency reported. Some 400 people, who volunteered for the games have also withdrawn their applications following the remark, which many described as inappropriate. During an online committee meeting dedicated to increasing the number of female members, Mori made the following statement:

"If we increase the number of female board members, we have to make sure their speaking time is restricted somewhat, they have difficulty finishing, which is annoying".

During the same meeting the official said that women are driven by a "strong sense of rivalry".

According to Sky New, the official later made a U-turn and said his comments were inappropriate. When asked whether he indeed believes women talk too much, he said: "I don't listen to women that much lately, so I don't know".

His statements were harshly criticised by members of the public, athletes, and sponsors of the Tokyo Olympics, but Mori refused to resign. He later issued an apology and reports say he will soon quit.

"First of all, I have to apologise for causing trouble and say please take care of the rest of the task. What's important is the success of the Olympics", a person close to him quoted Mori as saying.

His apology, however, failed to calm the anger. The International Olympic Committee called the official's statements "totally inappropriate". Toyota Motor Corp. said it is "truly regrettable" that Mr Mori's remarks are different from the values that the company cherishes.

One of Japan's most famous female athletes, Naomi Osaka, said persons who make such "ignorant" statements need to have "more knowledge on the thing that they're talking about".

The government has received more than a thousand angry calls from members of the public over Mori's statement.
His potential resignation will deal yet another blow to the Tokyo Olympics, which was postponed last year due to the coronavirus pandemic. Despite the world being nowhere close to beating the infectious disease, the organisers decided not to delay the event again. The Japanese public apparently does not appreciate this decision.

According to a latest poll, 47.1 percent of those surveyed said the Olympics should be postponed again due to the pandemic. Only 14.5 percent of respondents said the sports event should be held as planned.