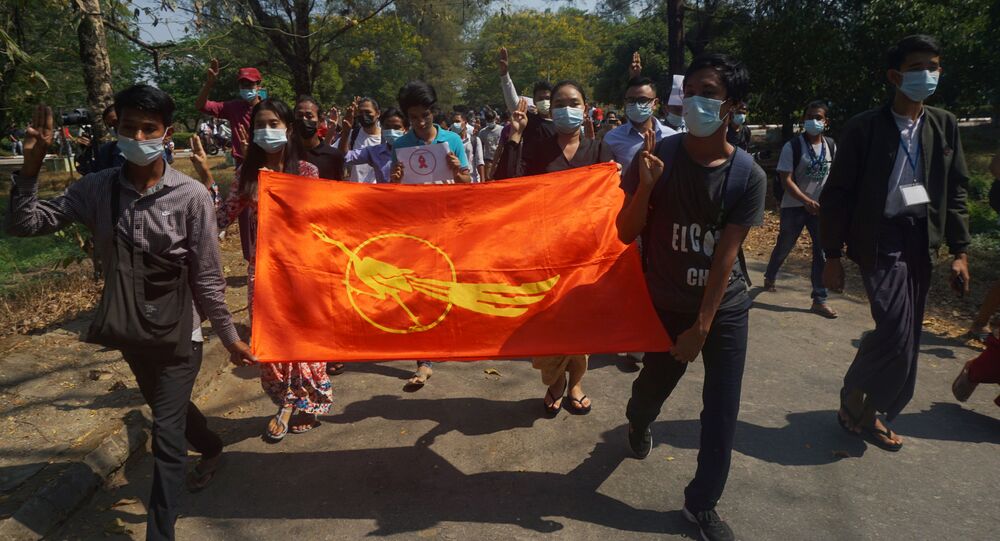 The Myanmar military, also known as Tatmadaw, has arrested the country's leader Aung San Suu Kyi and President Win Myint amid claims of election fraud. The coup ended 10 years of democratic rule, which were preceded by decades of military rule.

Hundreds of teachers and students poured onto the streets of Myanmar's largest city Yangon after the country's military, Tatmadaw, expanded their arrests of Myanmarese officials on 5 February in the follow up to the 1 February coup. A new wave of protests has hit the country hours after the military arrested Win Htein - a key aide to state counsellor Aung San Suu Kyi - and Win Myint, the country's president According to some estimates around 130 officials have been detained by the military so far.

More than 200 students and their teachers at Yangon's Dagon University organised a rally to oppose the military coup, singing songs of revolution and giving the three-finger salute, which became a symbol of Myanmarese pro-democracy movements.

Dagon University's students chanted "Long live Mother Suu" referring to state counsellor Aung San Suu Kyi, the former political prisoner and one of the iconic figures of the Democratic protests in Myanmar that eventually ended with a transition from military rule to civilian control of the government.

"We will not let our generation suffer under this kind of military dictatorship", Min Sithu a student at the Dagon University told AFP.

Before 1 February, Suu Kyi served as state counsellor - equivalent to the prime minister - and as minister of foreign affairs. She also remains general secretary of the National League for Democracy (NLD), which won the majority of seats at the last parliamentary election.

The protests against the military coup also erupted beyond Yangon, including in the country's capital, Naypyidaw, where several dozen government employees flashed red ribbons showing their support for the NLD. Protests also emerged in the south-eastern city of Dawei.

© REUTERS / Dawei Watch
People on motorcycles raise a three-finger salute as take part in a protest against the military coup, in Dawei, Myanmar February 5, 2021 in this picture obtained from social media. Dawei Watch/via REUTERS

The demonstrations in Myanmar continued despite the military's decision to cut the country off from Facebook – the social media platform where anti-military demonstrators have organised the protests. Civil Disobedience Movement is among the forces, who used the platform to call on people to express their opposition to the events unfolding in Myanmar every day by banging pots, clanging cymbals or hooting car horns in support of other protestors. Since the Facebook access was cut off, the anti-coup protesters either migrated to Twitter or started using VPN services to circumvent the ban.

The protests rocked Myanmar soon after the military arrested Suu Kyi and her closest allies on 1 February under the pretext that the election fraud accusations against the NLD's victory in 2020 election threatened national sovereignty. Suu Kyi has since been accused of violating import laws by smuggling walkie-talkies. The coup has been harshly condemned in the US and President Joe Biden has called on the military to relinquish their power and his National Security Adviser Jake Sullivan hinting at the possibility of sanctions against the Tatmadaw. The UN, in turn, expressed "deep concern" over the events taking place in the country.