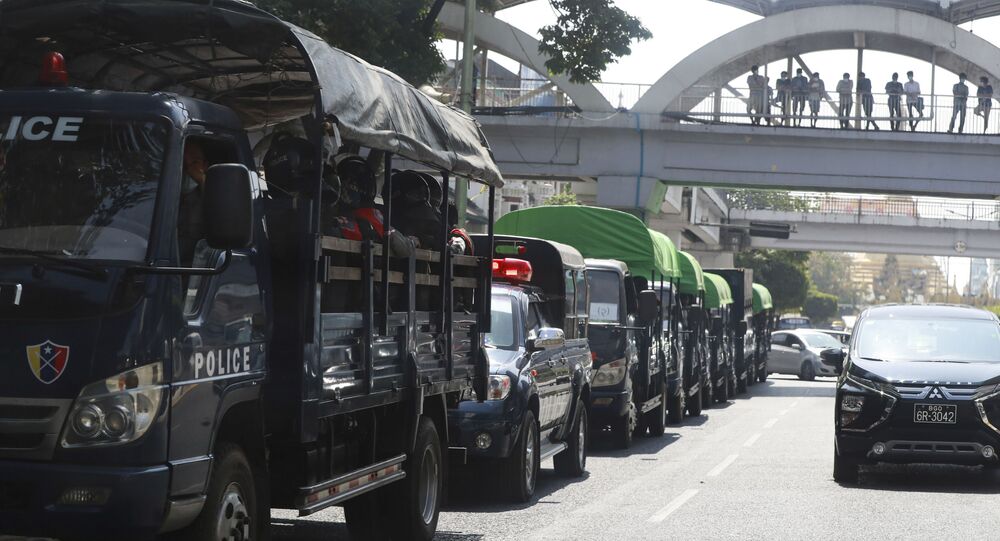 In the aftermath of the 8 November elections, the NLD won 396 out of 476 seats in the combined lower and upper houses of parliament, leaving little room for political manoeuvring for the military-backed Union Solidarity and Development Party (USDP). The Tatmadaw insisted that the NLD rigged the elections, citing 10.5 million cases involving irregularities, something that Myanmar’s Election Commission vehemently denies.

Myanmar's new elected parliament was set to meet for the first time on Monday, however, First Vice President Myint Swe, who will now be serving as Myanmar’s acting president, stated that power is being handed over to Commander-in-Chief of Defence Services Min Aung Hlaing. Previously, the Burmese military rule lasted from 1962 to 2011.

The events in Myanmar have demonstrated that the military is still maintaining control over the country, says Liao Chun'yong, director of the Centre for Myanmar Studies at the China-ASEAN Research Institute at Guangxi University.

"The detention of key members of the NLD by the Myanmar military reflects previous systemic tensions between the military and the democratically elected government," says Liao. "The military said they would take control of the country for a year. The further scenario will depend on the reaction of the NLD to warnings from the military. If the ruling party and its leaders reject to confront the military, especially on the problem of election fraud, then this will allow the army to leave power later, retaining its face. And then the tension in relations between the two sides of the ongoing political conflict will be resolved."

The military actions towards the National League for Democracy has also sent out a warning to local national armed groups, the Chinese scholar believes. According to him, the goal is to show that the army rules the roost and in the event of disobedience can take power at any time in accordance with the provisions of the 2008 constitution.

At the same time, a repeat of Myanmar's tragic 1988 Uprising cannot be ruled out, notes Aida Simonia, leading researcher at the Centre for Southeast Asia of the Institute of Oriental Studies (RAS). Back then, the population, driven to extreme poverty and hunger, revolted against the government before being pegged back by the military.

Although many are disappointed in the National League for Democracy for alleged voter fraud, the party still has many supporters in the country, Simonia says, suggesting that the people may take to the streets prompting riots and violence.

"The situation is still fluid," says Professor Thitinan Pongsudhirak, director of the Institute of Security and International Studies at Chulalongkorn University in Bangkok. "Seizing power is one thing but keeping it at a high cost will be a big challenge to the Tatmadaw. It would not be surprising to see a popular uprising against military rule later this year."

Ahead of the takeover of power, the UN, US, and major EU states issued a statement last week saying: "We urge the military, and all other parties in the country, to adhere to democratic norms, and we oppose any attempt to alter the outcome of the elections or impede Myanmar’s democratic transition." The Biden administration warned the Burmese military on Sunday, saying that Washington "will take action against those responsible" if the takeover happens.

"Myanmar's military coup is an early test for the Biden administration," suggests Pongsudhirak. "It may well err on the side of not overreacting. I think the US response under Biden will be more nuanced this time. The Biden administration is likely to condemn the coup in no uncertain terms but not to the extent that it will isolate Myanmar."

President Biden says they’re reviewing possible sanctions on Myanmar and “the military’s seizure of power, the detention of Aung San Suu Kyi & other civilian officials...are a direct assault on the country’s transition to democracy and the rule of law.”

​The unstable political situation in the Southeast Asian country could backfire on its neighbours and allies, depriving the Association of Southeast Asian Nations (ASEAN) of the ability to combat common threats, including COVID and the South China Sea dispute, according to Nguyen Khac Giang, research fellow at the Institute for Economic and Political Research (VEPR).

"The best bet, it would seem, is for neighbouring ASEAN states to appeal for the Tatmadaw to look beyond their immediate interests to see the benefits that would accrue from stability based on political legitimacy," suggests John Blaxland, Professor of the International Security and Intelligence Studies at ANU.

At the same time, Nguyen Khac Giang says that some of Myanmar's neighbours, Vietnam in particular, have always maintained working relations with Naypyidaw's civilian and military authorities. "Therefore, recent events did not greatly affect the relations between the two countries," the scholar remarks.

What's happening in Myanmar has a huge impact on China

Xi already built 2 pipelines through Myanmar, and has big plans for a major port and rail line pic.twitter.com/sYA7muIBeA

​For its part, China has expressed hopes that all parties in Myanmar will be able to resolve their differences in line with the constitution and ensure political and social stability. Burmese political stability has always been Beijing's priority as it opened the door for investment and economic cooperation between the two countries, according to Aida Simonia.

Beijing is not poised to lose anything and is likely to continue economic cooperation with Myanmar regardless of who is at the helm, she notes, adding that earlier Beijing managed to maintain good relations with both the Tatmadaw and Suu Kyi government.

"The current events will cause many uncertainties in the political situation in Myanmar," warns Liao. "The political instability reduces the confidence and expectations associated with Chinese investment in Myanmar. In particular, in my opinion, this could affect projects such as the construction of the China-Myanmar economic corridor and the construction of a deep-water port in the Kyaukpyu special economic zone."

Given that previously Beijing and Naypyidaw agreed to accelerate the implementation of joint economic and infrastructure projects within the framework of the Belt and Road initiative, the latest political events "may put this process on a short pause, as the pandemic did, but the general trend for cooperation will not be redefined," according to Simonia.

State of Emergency Declared in Myanmar