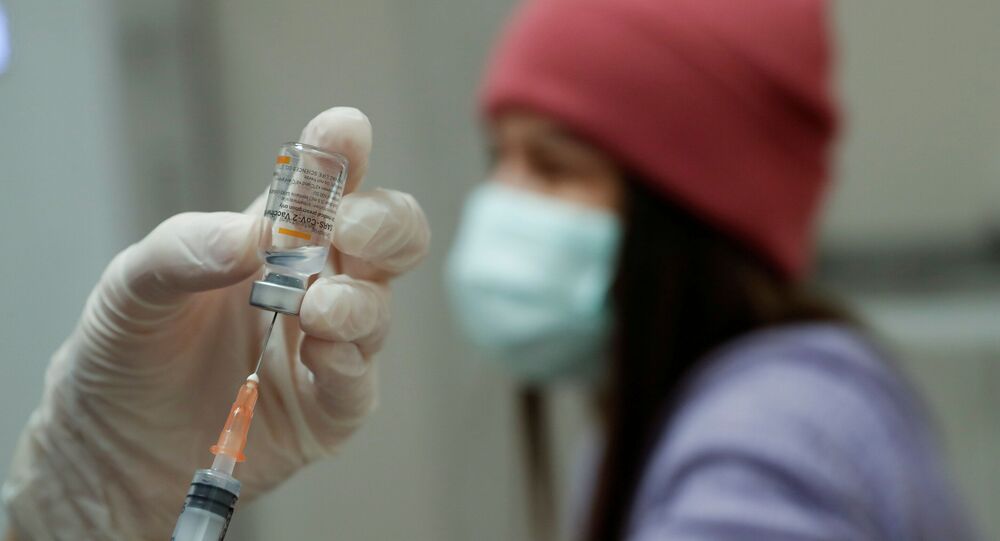 While the Chinese inoculation is undergoing its third round of trials with preliminary results of its efficacy unclear, the vaccine developed jointly by American Pfizer and German BioNTech has seemingly been followed by a trail of significant reactions and even death, which so far have not been directly connected to the coronavirus shot.

The coronavirus inoculation created through the joint efforts of the American and German pharmaceutical companies ended up under the spotlight after several patients who had received them suffered either temporary side effects, which halted the drug's application, or died not long after. Specifically, 23 elderly people died in Norway after getting the Pfizer jab, although it is uncertain whether the vaccine was to blame.

© AP Photo / Maya Alleruzzo
A medical professional prepares to administer the Pfizer COVID-19 vaccine to a woman at a makeshift vaccination center in a sports arena in Jerusalem, Thursday, Jan. 14, 2021.

As the World Health Organisation and Norway are working to determine whether Pfizer's jab caused death, ruling it out in at least 13 cases so far, several Chinese media lambasted the fact that their opposite mainstream numbers in the West failed to report properly on the issues surrounding the medicine.

At the same time, the very same western media were quick to hype up the news that the Chinese vaccine, CoronaVac developed by SinoVac, had shown lower-than-expected efficacy in Brazilian trials, the Global Times stressed in its editorial. The Chinese jab demonstrated more than 90 percent efficacy in the first two rounds of trials conducted domestically. The third round of trials conducted abroad in Brazil, however, produced conflicting results – namely that CoronaVac, based on inactivated COVID-19 viruses, was showing an efficacy ranging between 50 percent and 78 percent.

"Double standards have become political correctness for them. They are no longer objective in terms of competition with China. Attacking China is their desperate goal," the Global Times declared.

The major Chinese newspaper went on to suggest that Pfizer shot's alleged issues might stem from the fact that it is based on a technology of mRNA, which previously had never been used in human vaccines. At the same time, Global Times stressed that western countries largely have no better choice than to use the vaccines available at hand, including the one by Pfizer/BioNTech, to proceed with mass vaccination.

China Renews Accusations of Coronavirus Originating in US Lab

As the WHO mission gets ready to start its probe in Wuhan into the origins of the deadly pandemic, the Chinese Foreign Ministry's spokeswoman Hua Chunying resurrected the theory claiming that the deadly disease stemmed not form a trans-species infection, but in a US lab. She specifically pointed the finger at US Fort Detrick military base alleging that that was where COVID-19 had started, and she urged the WHO to investigate her claims.

It is unclear what evidence has led the ministry's spokeswoman to believe the disease stemmed from Fort Detrick's laboratories, but in March 2020 another spokesman for the ministry, Zhao Lijian, alleged that the US soldiers brought the coronavirus pathogen to Wuhan. The theory was widespread in the Chinese social media at the time, claiming that COVID-19 was brought to China in October 2019 by 300 American servicemen, who attended Military World Games that took place in the Wuhan region.

Several US officials, including former President Donald Trump, accused China, in turn, of not only aiding the spread of the coronavirus outbreak abroad, but also of purportedly creating it in the first place in the laboratory located near Wuhan. The ex-president claimed his country had evidence that Beijing's scientists accidentally released the virus they had been studying at the lab, but never revealed the evidence to the public.