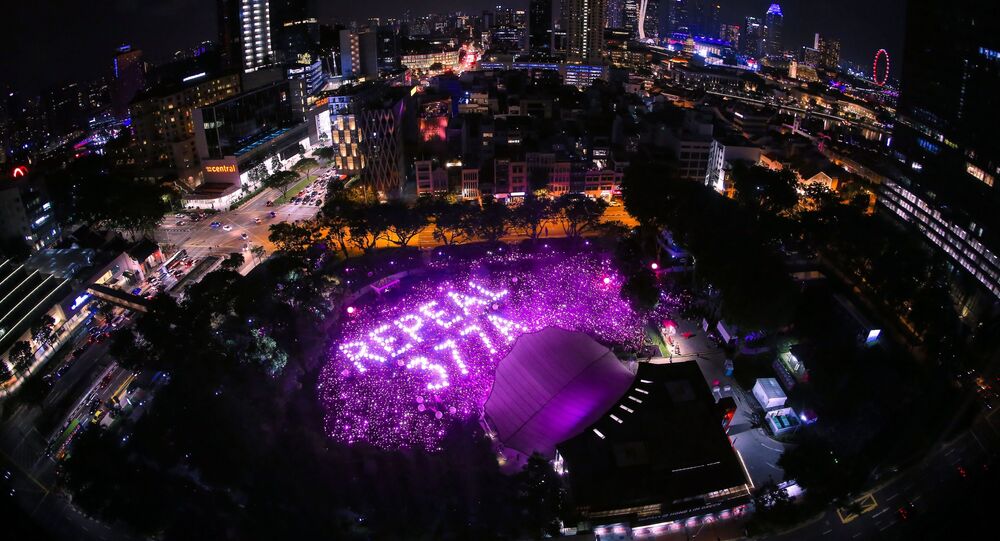 More than three dozen former British colonies have retained the anti-LGBTQ laws imposed on them by London - roughly half of the world’s nations that criminalize homosexuality or being transgender. Enforcement varies wildly, however.

LGBTQ rights activists in Singapore are challenging the city-state’s High Court for a 2020 ruling upholding a colonial-era anti-homosexuality law after India's court overturned an identical law.

In March 2020, the High Court upheld Section 377a of the penal code, which criminalizes “any act of gross indecency” by a male person “with another male person.” The law is rarely applied, but it carries a maximum sentence of two years in prison.

Brought by Johnson Ong Ming, a 43-year-old DJ; 42-year-old Bryan Choong Chee Hoong, the former executive director of LGBT organization Oogachaga, and Roy Tan Seng Kee, a 61-year-old retired medical doctor, the case argues that the law contravenes the right to free speech and assembly, as well as equality before the law. The court disagreed and now the trio has appealed, saying that the judge’s interpretation is wrong, according to AFP.

“In declining to strike out this archaic and discriminatory law, the Court has reaffirmed that all gay men in Singapore are effectively un-apprehended criminals,” Téa Braun, director of international LGBT legal support group Human Dignity Trust (HDT), said at the time of the ruling.

A British colony until 1959, Singapore’s anti-homosexuality law dates to 1938, making it one of dozens of countries to have retained colonial-era anti-sodomy laws after independence.

While Singapore’s High Court first ruled to uphold the anti-homosexuality law in 2014, a 2018 decision by India’s High Court to shred the provision prompted Singaporean activists to issue a new challenge, hoping their courts would follow suit. Similar assumptions followed in several African countries that had also been colonized by the British, but with mixed results: Botswana’s High Court struck down the law in 2019, but Kenya’s upheld it.

Nearby Brunei, just across the South China Sea from Singapore, also doubled down on anti-sodomy laws inherited from the British Empire, adding in 2019 new Sharia-based punishments for the sultanate’s Muslim population.

Asked about the future of Section 377a, Singaporean Prime Minister Lee Hsien Loong predicted it would be around “for some time.”

“You know our rules in Singapore. Whatever your sexual orientation, you are welcome to come and work in Singapore,” Lee said in 2019, noting that the city holds the annual LGBTQ Pink Dot Festival, which he attended that year, alongside his wife and his son, who is gay. “It is the way this society is: We are not like San Francisco, neither are we like some countries in the Middle East,"Lee said. "(We are) something in between, it is the way the society is.”