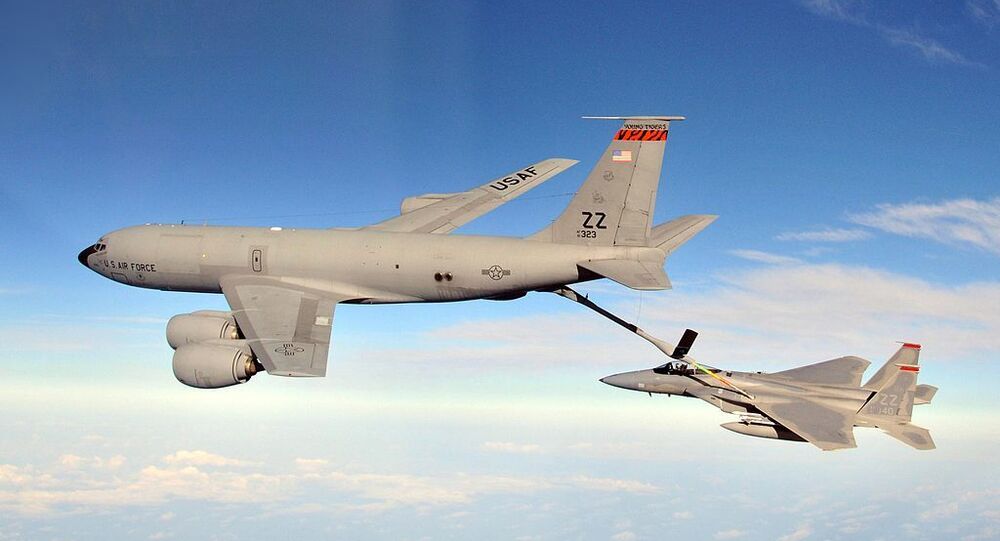 The US has sharply increased its spy plane activity in the South China Sea in the last year, where Washington has challenged Beijing’s claims of sovereignty over islands and sea lanes, making the already-busy airspace increasingly crowded.

In the skies over the South China Sea last week, a US airborne tanker came perilously close to a Taiwanese passenger airliner, passing just hundreds of feet from the aircraft.

On the morning of January 13, a US Air Force KC-135 Stratotanker aircraft flying south of Taiwan flew just 250 feet away from an EVA Air passenger flight from Taipei to Singapore. The incident was first reported by Italian aviation news aggregator Avio Blog using ADS-B data.

​According to Flight Aware, the EVA Air Boeing 777-300ER was flying at 36,000 feet at the time it crossed paths with the KC-135, which was flying at just 35,750 feet and using the International Civil Aviation Organization (ICAO) transponder code PEARL50.

“ICAO rules specify that aircraft flying above FL290 [29,000 feet] are to maintain a vertical separation of 2,000ft,” Avio Blog noted. These aircraft were separated by just 250 feet vertically.

Audio from the encounter was recorded by air traffic control in Taipei. In the recording, a female controller can be heard telling the unidentified aircraft that it was interfering with Taipei’s flight information region (FIR) ”and needs to “depart immediately” and “identify yourself.”

"An audio recording purported to be by Taipei air traffic control was circulated on social media. We can hear clearly that the female controller was telling the unidentified aircraft squawking on 1400 over KABAM that it was interfering with Taipei FIR." pic.twitter.com/oIdg4F4Mz7

US refueling tankers regularly fly across this region of the northern South China Sea, which sits just south of Taiwan, east of the Pearl River delta, and west of the Luzon Strait. There, they provide support for the slew of US spy aircraft that fly daily patrols. Earlier on January 13, the KC-135 in question entered the South China Sea with one such spy aircraft: an RC-135 Rivet Joint signals intelligence aircraft.

Heading towards the #SouthChinaSea pic.twitter.com/SrthPjz1e0

​The South China Sea Probing Initiative (SCSPI), a Beijing-based think tank, has meticulously recorded the activities of US spy planes in the region, noting a pronounced uptick in patrols in 2020.

This is not the first time those patrols have violated ICAO safety rules, either: Sputnik reported in September 2020 that SCSPI had caught US spy planes changing their ICAO hex codes in mid-flight from American codes to those used by aircraft from other countries, such as Malaysia. Doing so helped them to fly close to Chinese airspace without arousing suspicion, but also imperiling real civilian aircraft that might be mistaken for a US spy plane in disguise.