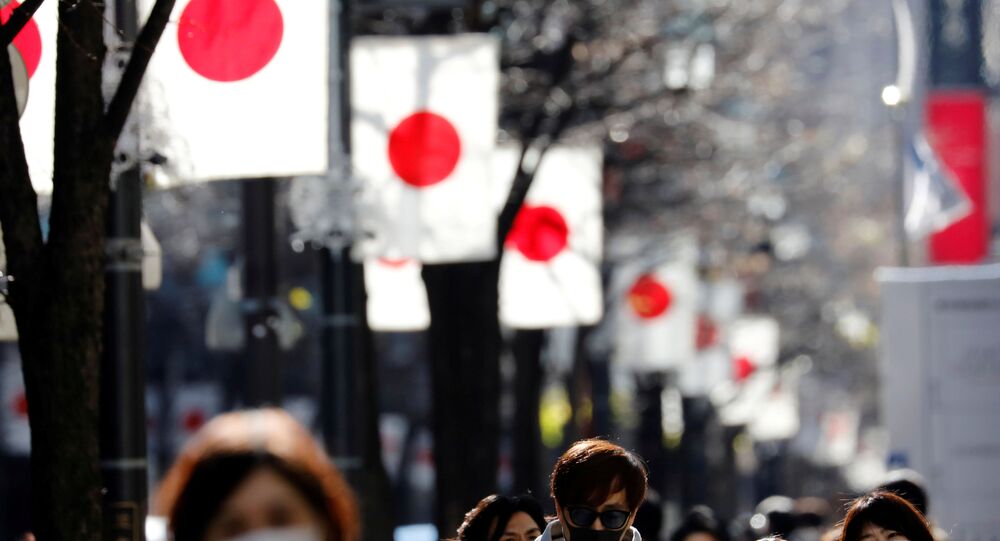 TOKYO (Sputnik) - The Shizuoka Prefecture in Japan is set to declare high alert over the spread of the UK strain of the coronavirus, which was recently found in people with no record of travelling to the United Kingdom, the public broadcaster NHK reported on Tuesday.

On Monday, the Japanese Health Ministry said three cases were recorded in Shizuoka among people aged between 20 and 70. None of the infected patients has ever been to the UK, however, they may have been in contact with those who have. The matter is being investigated.

Meanwhile, the southernmost prefecture of Okinawa is preparing to introduce its third state of emergency since April due to a surge in COVID-19 cases, according to the newspaper Ryukyu Shimpo.

The Japanese government has already declared a state of emergency in 11 of its 47 prefectures, which will last through 7 February.

© REUTERS / KYODO
Two women walk on an unusually empty street during a state of emergency due to coronavirus disease (COVID-19) outbreak in Kyoto, Japan January 13, 2021. Kyodo via REUTERS ATTENTION EDITORS - THIS IMAGE WAS PROVIDED BY A THIRD PARTY. MANDATORY CREDIT. JAPAN OUT. NO COMMERCIAL OR EDITORIAL SALES IN JAPAN.

The number of critically ill patients in Japan has exceeded 1,000, marking the highest figure since the beginning of the epidemic. The rise in severe cases in the country has been observed for 17 consecutive days.

Several new mutated COVID-19 strains have been reported across the globe in recent weeks. In mid-December, the UK government reported that a new variant of the disease, which is believed to be up to 70 percent more transmissible, was discovered in southeast England.

Other variants have been discovered in South Africa and Brazil, raising fears over vaccine efficacy.