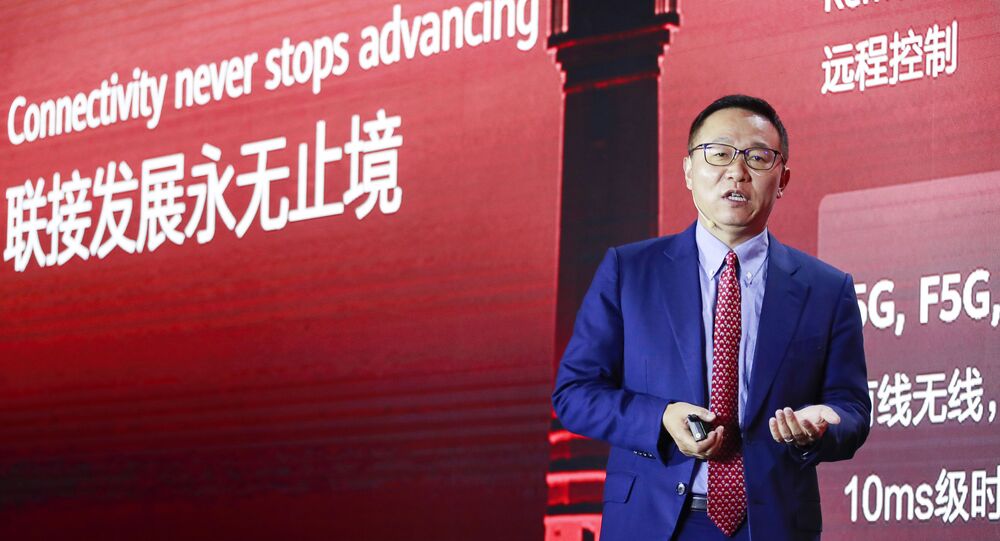 The news comes after Canberra excluded "high-risk vendors" such as the Shenzhen-based firm from building national networks, citing concerns they could be targeted by foreign governments against Australian laws, Australian media reported.

Chinese telecom giant Huawei has called on Australia to hold talks on developing the next generation of telecom networks, a senior official from the firm told the Sydney Morning Herald reported this week.

© AP Photo / Mark Schiefelbein
Huawei: Australia Will Reportedly Lose $100m, 1,000 Jobs Amid Canberra's 5G Ban, US-China Trade War
According to Jeremy Mitchell, Huawei Australia director of corporate affairs, it was "not too late" for approval to build Australia's 5G networks, but it was "very unlikely".

“The conversation we now want to have with the Australian government is what do we do when 6G or 7G comes, because like it or not Huawei or another Chinese company will be the leader in this area. We would like to work with the government to ensure Australia has access to the best technology, but do so in a way which gives security agencies confidence in terms of risk mitigation", he said in a statement

He added 6G technology was "just at the very beginning of research" and was important to "get in now to understand" where the technology is going.

The news comes after Canberra excluded "high-risk vendors" such as the Shenzhen-based firm from building national networks, citing concerns they could be targeted by foreign governments against Australian laws, the report read.

Australia is a member of the "Five Eyes" cybersecurity alliance along with New Zealand, the United Kingdom, Canada and United States. The UK reversed its decision to allow Huawei to build its networks in July, citing risks to supply chains.

© AFP 2020 / Maja Suslin
Europe 'Risks Falling Behind Again' In 5G Rollout Amid Swedish Huawei Ban, Ericsson Chief Exec Says
The news comes amid threats from Ericsson chief executive Börje Ekholm, who vowed to move its headquarters from Sweden if Stockholm did not lift its ban on Huawei. Sweden's Post and Telecom Authority excluded Huawei from 5G mid-band spectrum auctions in October, citing national security concerns, but the decision was blocked by national courts.

“Ericsson in Australia is at a near monopoly status ... I think it would be welcome if Ericsson in Australia, as well as Nokia, adopted the same approach as their European headquarters. In Europe they’ve always had an open and competitive environment when it comes to the vendor space. Look at the way they've done research co-operation – it’s a different mindset on how the interaction goes in the vendor space compared to Australia," Mitchell concluded.

Huawei Calls on Governments To Build 5.5G Technologies Amid Rise of Tech Nationalism

Huawei Technologies
Huawei Exec Warns Telcoms of 'Complacency', Urges 5.5G to Evolve Amid US Anti-China Telco Pact Push
Huawei executive director, David Wang, urged the global telecoms industry in November to consider developing 5.5G networks to continue the evolution of the technology, which could remain for up to 30 years.

But the Next G Alliance, an group of rival tech companies, called on telecoms to develop 6G networks without firms such as Huawei. The coalition is joined by Apple, Google and LG, and backed by Ericsson and Nokia, among others.

Similar efforts have been made by the US OpenRAN Coalition, which has called on global telcos to adopt the open-source infrastructure technology over vendor-specific network equipment.

© Sputnik / Yakov Andreev
5G Spectrum Auctions Misused to Push Political Goals Amid Wider EU Network Rollout, Policy Head Says
Tech nationalism has placed pressure on global telecoms developing unified standards on 5G, despite the ongoing US trade war on China, after Beijing saw numerous mainland tech firms such as Huawei, ZTE and chipmaker SMIC slapped on an Entity List in recent months, blocking access to US technologies such as semiconductors, software and many others.

Washington also announced it would join the Canada-led Global Partnership on Artificial Intelligence as well as a separate pact on artificial intelligence with Downing Street, who hosts the D10 security alliance.