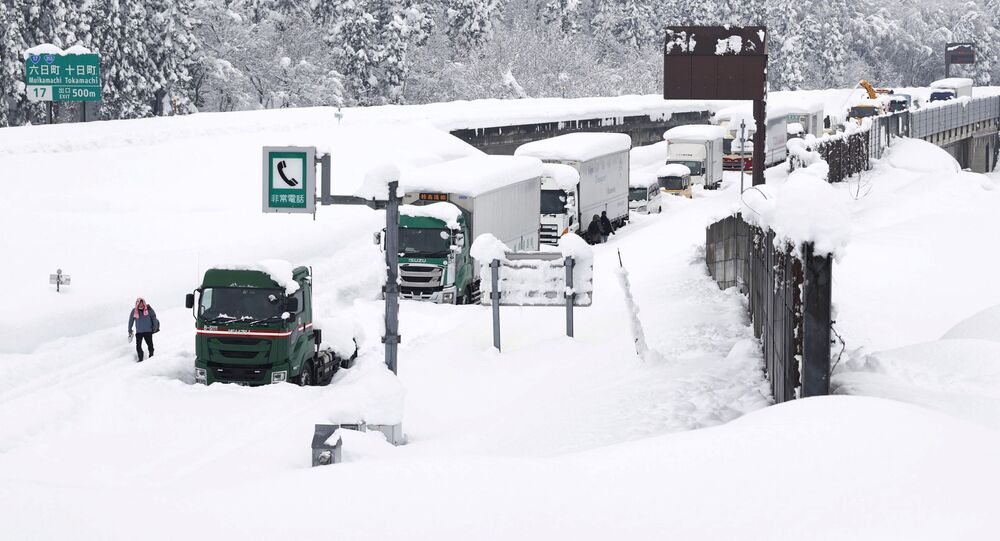 Over 1,000 in Japan Spend Night Stuck in 15-Km Traffic Jam During Heavy Snowstorm

Over the past days, Japan’s central and northern regions, including the Niigata and neighboring Gunma prefectures, have seen record snowfall, seven times above the norm for this time of year, shocking local residents, according to media reports. The wintry weather resulted in disrupting transit and causing some areas to lose power.

More than a thousand people in Japan were forced to spend Thursday night in their vehicles stuck in a traffic jam on a highway connecting Tokyo and the Niigata prefecture during an extremely heavy snowstorm, according to media reports.

The traffic congestion was said to have started on Wednesday after a car stuck in deep snow in the middle of the Kanetsu Expressway, Japan’s highway operator Nippon Expressway Company (NEXCO) told CNN.

The jam reached its peak on Thursday night, local time, as a line of motionless cars and trucks on the highway stretched a full fifteen kilometers (over 9.3 miles), according to NEXCO.

That’s what you can call "the mother of all traffic jams" as
1,000 cars are stuck in a 24-hour traffic jam after the Kanetsu Expressway between Tokyo and Niigata in Japan was hit by heavy snowstorms pic.twitter.com/7shKF8ELLE

According to Japanese broadcaster NHK, motorists remained in the jam with no access to food or water for many hours. At least one middle-aged woman and an elderly man were hospitalized.

“The snow was extremely heavy. As time went by, the cars got buried. I was really scared. I've eaten all of my food and drinks,” one of the drivers stuck in the highway told the broadcaster, “Now, to drink water, I have to melt snow I collect in a plastic bottle.”

Japan Self-Defense Forces personnel were sent to the scene to help free people and provide them with food, water, and fuel, according to NHK.

CNN said that lanes emanating from Tokyo were eventually opened, facilitating movement from the capital, while lanes leading into the capital remain blocked as of Friday noon, with over 1,000 vehicles on the road covered with snow.