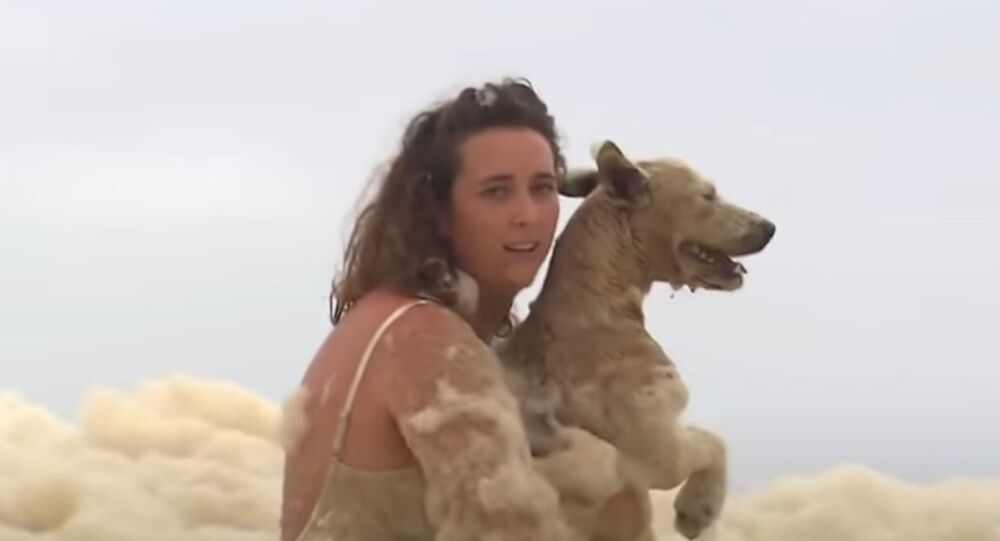 Australia’s northeast has been hit with massive seafoam along its coast due to heavy rains and gusty winds. A live TV broadcast accidentally caught a dramatic moment as a woman on a beach desperately tried to save her dog from being swept out to sea.

On Monday, the frantic cry of a dog owner was caught by 7NEWS Queensland weatherman Paul Blurt, who later joined her in a rescue with other people during an agonizing search. According to the local news outlet, he was one minute from going on air in front of a wall of brown foam.

The video, which has now gone viral on several social media platforms, captures a woman in a white swimsuit desperately calling her dog, Hazel, while wading through the brownish foam along the coast of Main Beach in Byron Bay, Australia.

“Hazel! Hazel!” cried the woman at the Gold Coast’s Snapper Rocks, prompting Burt to join her in the foam to search.

Luckily, the frantic situation ended on a positive note as she found Hazel deep in the foam and grabbed the pooch into her arms.

According to 7NEWS Queensland, a large portion of Byron Bay’s Main Beach was washed away, and receding tides revealed almost two-metre sand drop-offs at the tourist town’s Clarkes Beach and nearby Duranbah Beach.

Earlier, locals had described the conditions as cyclonic, as panels were blown off of roofs on the Circle on Cavill building, forcing the partial closure of Ferny Avenue in Surfers Paradise.

That sure is one lucky doggo!