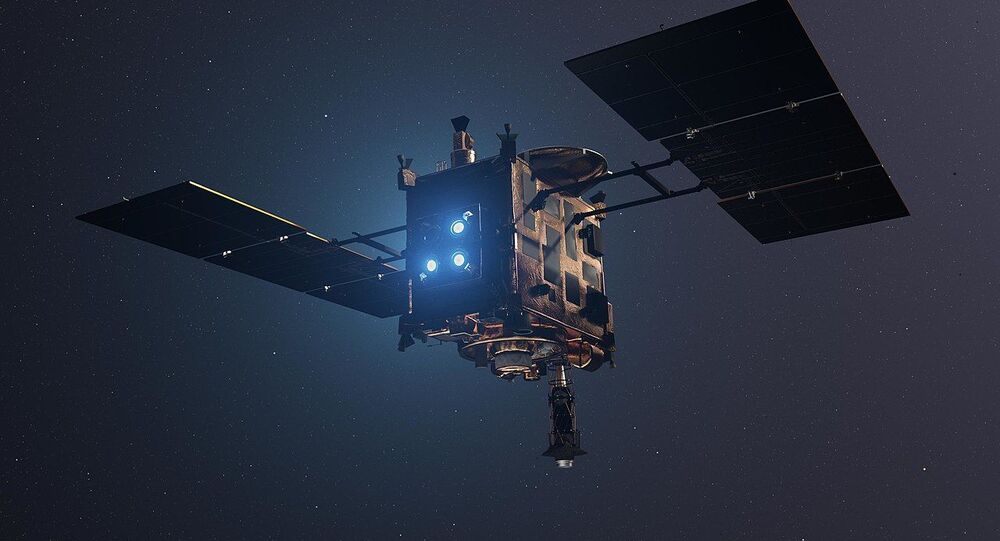 TOKYO (Sputnik) - The Hayabusa2 capsule containing samples from near-Earth asteroid Ryugu has been delivered from Australia to Japan for detailed analysis, the NHK broadcaster reports.

The aircraft carrying the capsule that took off from the Royal Australian Air Force (RAAF) Woomera Base airport on Monday has landed at Tokyo Haneda Airport, NHK said on Tuesday morning.

On Monday, the Hayabusa2 sample return mission operated by the Japanese space agency, JAXA, said on Twitter that the aircraft carrying the capsule was expected to land at Haneda Airport at 06:45 local time on Tuesday (21:45 GMT on Monday).

The Hayabusa2 capsule containing samples from asteroid Ryugu was located in the planned area in Australia after a successful landing at 4:47 Japan time on Sunday (19:47 GMT on Saturday), as a result of a helicopter search. The capsule was then delivered to a local JAXA headquarters.

​On Monday, the recovery team confirmed that the sample container was properly sealed and that they had completed the gas sampling work.

"We analyzed the collected gas, but it is still unknown whether the gas originates from the Ryugu sample. Detailed analysis will continue in Japan!" the Hayabusa2 mission said on Twitter.

This morning (12/7), the recovery team confirmed that the sample container was properly sealed and completed the gas sampling work. We analyzed the collected gas, but it is still unknown whether the gas originates from the Ryugu sample. Detailed analysis will continue in Japan!

​The Japan Aerospace Exploration Agency’s (JAXA) Hayabusa2 mission was launched in December 2014. It reached Ryugu in 2018 and collected samples in 2019, some of them from beneath the asteroid’s surface.

The Hayabusa2 capsule contains the first rock samples ever collected from beneath the surface of an asteroid. It is the second time that untouched material from an asteroid has been brought back to our planet, and scientists expect the samples to offer clues into the origins of life on Earth.