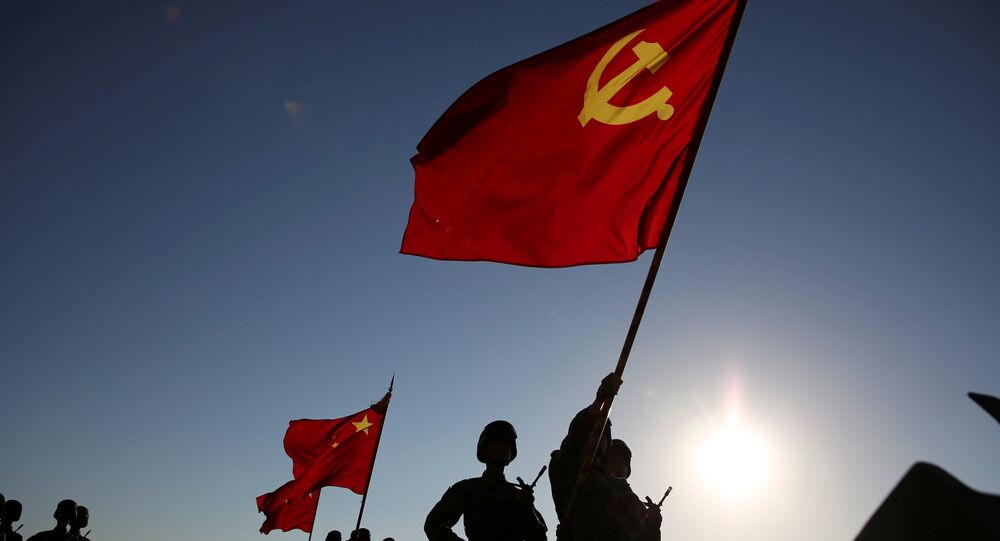 Top US intelligence officials have sounded the alarm in recent days about the supreme danger posed by China and the Communist Party of China to the United States. While their rhetoric casts the US as a victim of China’s unfair rise, in reality the US’ climb to world leadership was helped by its own sabotage of Chinese development.

In a joint statement on Friday, Senate Select Committee on Intelligence acting Chairman Marco Rubio (R-FL) and Vice Chairman Mark Warner (D-VA) said they agree with US Director of National Intelligence John Ratcliffe “that China poses the greatest national security threat to the United States. Our intelligence is clear: the Chinese Communist Party will stop at nothing to exert its global dominance.”

Ratcliffe claimed “Beijing intends to dominate the US and the rest of the planet economically, militarily and technologically” through a vast espionage plan to steal intellectual property from the US, replicate the technology, then edge those same firms out of the market - a strategy he called “rob, replicate and replace.”

Ratcliffe’s article isn’t limited to attacking the Communist Party of China, however: he also warns of the dangers “Chinese nationals” pose to intellectual property and to “research and development secrets,” noting the FBI is “frequently arresting” them. This kind of language poses a further danger to the roughly 5.1 million Americans of Chinese descent, who have already become the targets of racist attacks over the past year thanks to US President Donald Trump’s quest to blame his government’s catastrophic handling of the COVID-19 pandemic on China.

Rubio and Warner hit similar notes in their statement, claiming that “Beijing’s infiltration of US society has been deliberate and insidious as they use every instrument of influence available to accelerate their rise at America’s expense.”

“This is our watershed moment and we must stand our ground. The United States must not and cannot accept Beijing’s quest to exert dominance, while dismissing international legal norms and committing egregious human rights abuses to further their goals,” they added. “We have made considerable progress in rebalancing the US-China relationship and laying a clear marker for US policy going forward, and we will not stand idly by as the Chinese Communist Party attempts to undermine our economic and national security.”

Rep. Adam Schiff (D-CA), who chairs the House Intelligence Committee, also said in a Thursday statement quoted by the WSJ that “it’s imperative the Intelligence Community rebalance its focus and funding to more effectively address the vast array of challenges that China poses to our national security. This is an area of substantial bipartisan agreement, and a challenge we must rise to meet.”

Their comments follow a US State Department paper’s publication last month that called for a decades-long “containment” approach to China akin to that pursued against the Soviet Union during the Cold War. The document calls for restructuring American society around the struggle, including revamping the US education system to inculcate in American children the necessity of confronting and halting China’s rise.

Long US History of Destabilizing China

However, the edice being built by these three pillars of the US intelligence community is ahistorical. While they position the United States as an unwitting victim of China, which is playing dirty in an unfair bid to get the upper hand and should simply accept its place as Number 2 World Power, they ignore the decades in which the US made every effort to “accelerate their rise” at China’s expense.

For example, the US intervened in China twice in the 19th century, helping the British to take the key trading city of Guangzhou in the Second Opium War and sending troops as part of the multi-national imperialist effort to crush the Boxer Rebellion, a widespread 1899-1902 rebellion against the Western powers that had all but taken over China.

At home, in 1882, the US also passed the Chinese Exclusion Act, which banned all immigration from China - again, on the argument that such immigrants posed a threat to the integrity of American society. The law was not fully repealed until 1965.

In China, the period between 1842 and 1949, when the People’s Republic of China (PRC) was founded and the country ceased to march to the beat of a Western drum, is called the “century of humiliation.” Even now, Chinese President Xi Jinping only expects China to have caught up with the West once again by 2049, a century after the country resumed its course of development.

After the Communist Party of China won the civil war against the Republic of China, which then became Taiwan, the CIA reportedly spent nearly $100 million funding a guerrilla force inside the new PRC. The CIA also had an entire program aimed at destabilizing Tibet by funding guerrilla forces there - a program US President Richard Nixon only abandoned in 1971 - and the US has provided extensive support to the rump Republic of China state in Taiwan, even after legally acknowledging the PRC as the sole legitimate government of all of China in 1979.

CIA-linked groups like the National Endowment for Democracy have also played key roles in supporting dissident groups in Xinjiang and Hong Kong that have staged violent attacks, including riots in Urumqi in July 2009 by al-Qaeda-aligned Uighur separatists that killed 197 people and injured more than 1,700. More recently, the protests that have rocked Hong Kong were revealed to be almost entirely US-backed after China’s new national security law implemented earlier this year banned political groups from receiving outside funding, and they almost immediately closed shop.