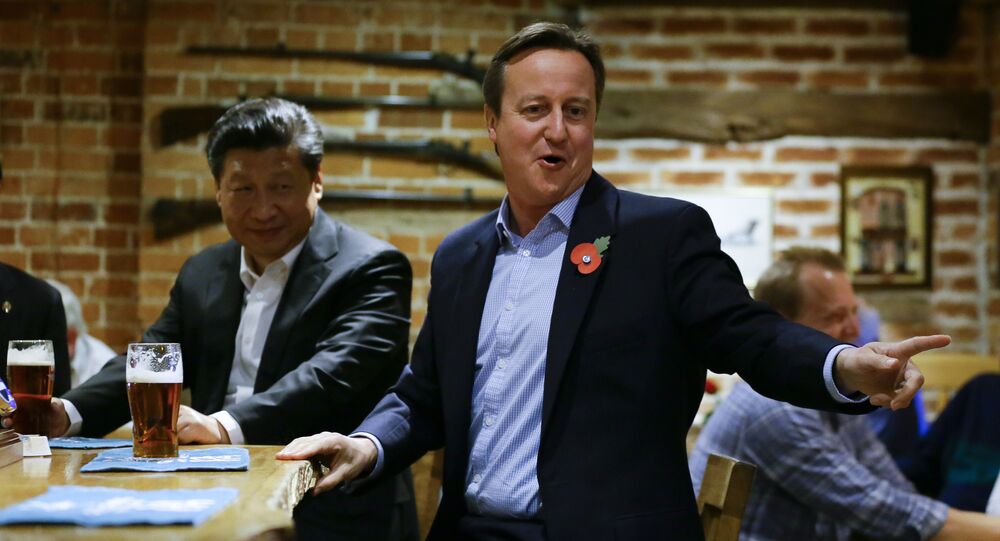 In 2016, then-British Prime Minister David Cameron pursued a closer relationship with the People's Republic of China, offering Chinese involvement in the UK's essential infrastructure such as power plants and telecommunications. In recent years, the UK has shifted away from the cordial arrangement and followed the US trade war.

Downer, who served as Australia's high commissioner to the UK throughout the time Cameron was prime minister and George Osborne his Chancellor of the Exchequer, criticised the duo for their cordial relations with the Chinese leadership.

During that period, he witnessed the two top Conservatives seek further Chinese investment in the UK, including involvement in key infrastructure projects. Downer was also Australia's chief diplomat in London during Chinese President Xi Jinping's momentous visit in 2015.

© AP Photo / Alastair Grant
A supporter of Chinese President Xi Jinping carries a large British flag past the national flag of China outside Downing Street where he is meeting the British Prime Minister David Cameron in London, Wednesday, Oct. 21, 2015

Downer accused China of becoming "increasingly aggressive" and "hostile to the interests of the western world" under President Xi.

He said that consecutive Conservative governments in Britain had let down traditional allies by viewing China as a "lucrative market" and that pursuing foreign investment was "superficial", "never sufficient", and "unlikely to be sustainable".

"Worse, it indicated that the UK was no longer a global geopolitical player, just a trading nation," he said.

He also said that Britain's stature as a UNSC member meant it "therefore must carry an unusually heavy obligation to uphold the rules-based international system".

"Britain’s strength in the world is its network of friends and allies. A policy towards a rising China which offered nothing more than pecuniary ambition was never going to impress British allies," Downer said.

However. the former diplomat welcomed recent signals from Westminster that it will be reversing many of the Anglo-China integration policies, including phasing out Huawei equipment from 5G networks, offering citizenship to Britain National Overseas (BNO) passport holders in Hong Kong, and supporting the Australian government's calls for an investigation into the initial outbreak of the coronavirus pandemic.

He called on the UK to "engage heavily" with the Quadrilateral Security Dialogue (or Quad) – made up of Australia, the United States, India, and Japan - including diplomatic and military support through "joint exercises and ship visits".

"The UK needs to engage heavily with these countries providing them with diplomatic support and every so often – and within the UK's capabilities – support from the armed forces through joint exercises and ship visits," Downer said.

He added that although the UK must necessarily accept China's rise as a global economic power, any alleged human rights abuses should be considered "unacceptable".

Downer's comments came as part of a new report entitled Defending Democracy in a New World, produced for a pressure organisation called The China Research Group, aimed at pushing Boris Johnson's Government towards a more abrasive policy regarding China.

The suggestions include forming a D10 - 10 self-proclaimed democracies, which would seek to reduce Chinese investment in key infrastructure, sanction Chinese officials over alleged abuses of human rights, provide support and legal aid to BNO holders in Hong Kong, ensure unpaid labour is not used in production, set guidelines on how universities and foreign governments can co-operate, and report compulsorily any Chinese involvement in UK joint ventures that leak information to the Chinese government and military.

China has widely denied accusations of using involvement in infrastructure, such as Huawei's integration into the UK's 5G network. Beijing-owned news outlet Global Times condemned the move earlier this year to ban the tech giant as an example of Britain "kowtowing to coercion from the Trump administration".

They also predicted that the effective sanctions against the company would lead to other Chinese firms being dissuaded from investing in Britain and that Beijing could respond in turn.

Huawei has said it is willing to sign a no-spying pledge as a precursor to involvement in any critical infrastructure and Beijing claims that the new western pivot against China is part of a strategy led by the United States to slow Chinese economic ascension rather than based on legitimate national security concerns.

The announcement that Huawei would be removed from Britain's 5G network by 2027 followed an ultimatum from US President Donald Trump that there would be no post-Brexit trade agreement if the UK did not follow Washington in its trade conflict.