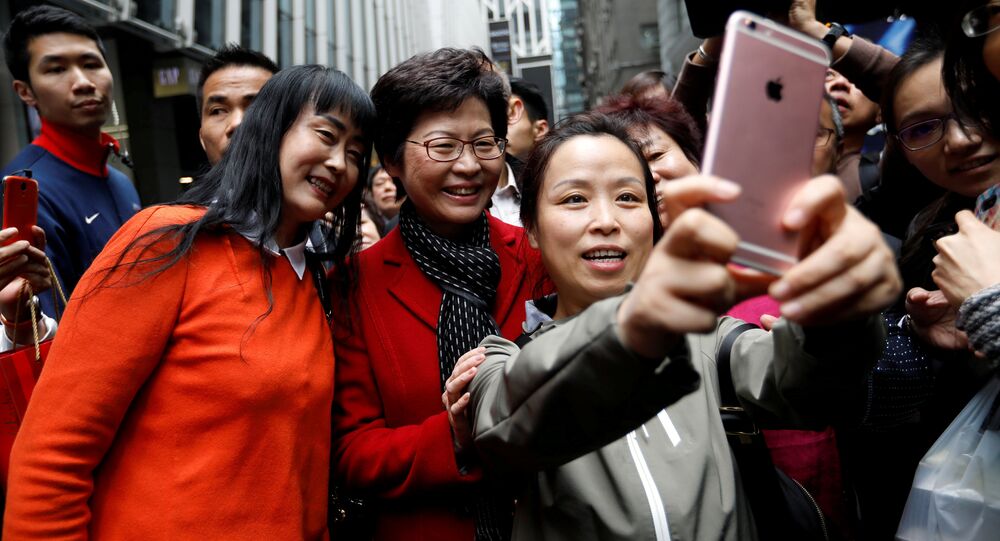 After the Chinese government tried to impose an extradition bill in June 2019, massive protests erupted, with hundreds of thousands taking to the streets. The protests escalated into violence, resulting in mass arrests. In order to regain control over the area, Beijing came up with the National Security Law.

Hong Kong’s Chief Executive Carrie Lam said on Tuesday that she was "very willing" to meet the public and hear the views of people amid the resignation of all opposition lawmakers from the Legislative Council of China's administrative region.

Earlier in November, the Hong Kong Democratic Party's lawmakers decided to resign from the Legislative Council, leaving the legislature without opposition to the pro-government members, shortly after four democratic lawmakers had been disqualified under a resolution passed by Beijing, which allowed Hong Kong to disqualify lawmakers if they are deemed a threat to national security.

​Carrie Lam described the Legislative Council without the opposition members as "more rational."

"I would say that with a more rational legislative council, it actually provides a much better platform for myself and my senior officials and my departmental colleagues to be engaged with the legislative councillors on issues of mutual concern," the politician said.

In June 2019, mass protests erupted in Hong Kong as a reaction to a proposed bill that would allow people to be extradited from the administrative region to mainland China. The demonstrations continued for weeks and turned violent even after the unpopular measure was withdrawn in September 2019. Beijing said that the situation in Hong Kong was a result of foreign interference in China's domestic affairs.

Hundreds of thousands of Hong Kong people take to the street in protest of the proposed law of extradition to China on Sunday. #hk #protest pic.twitter.com/2WVDLCesqB

​To stabilize the situation in the city and eliminate the threat of international interference, the Chinese government started to impose stricter laws. In late June, Beijing enacted the national security law in Hong Kong. The new legislation banned separatist and terrorist activities, along with any form of foreign interference in Hong Kong.