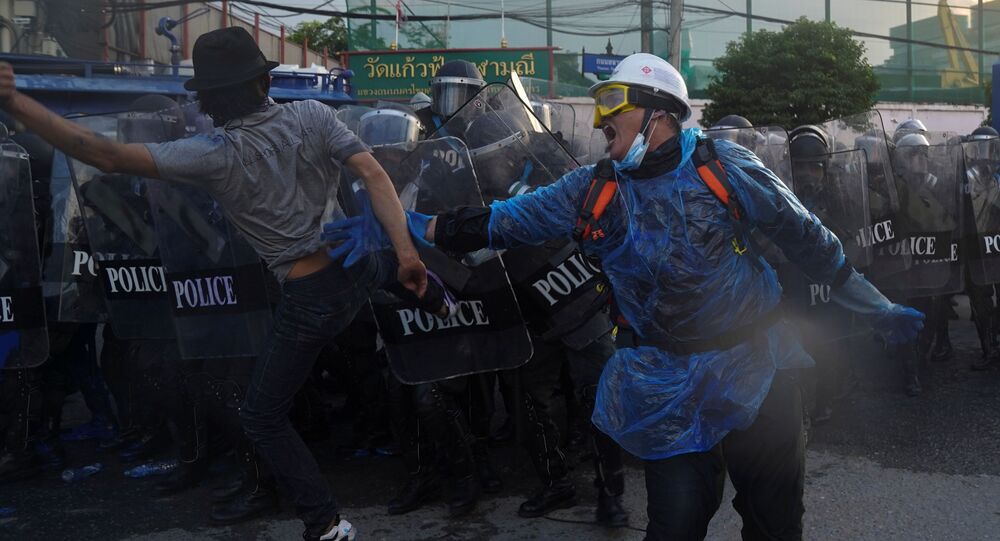 In 2014, the military junta came to power in Thailand after a coup. Since then, former head of the Royal Thai Army Prayuth Chan-o-cha has led the country and approved a new constitution, allowing the military to elect two prime ministers in future.

Prime Minister of Thailand Prayuth Chan-o-cha has threatened to take legal action against the protesters calling for reform of monarchy, using “all laws, all articles”, Thai News Agency cited the prime minister’s spokesperson as saying on Thursday.

According to the statement posted on state-run Thai News Agency, the prime minister and the government are determined to find a peaceful solution to the situation, although they are ready to enforce laws applied to the violations during the protests.

The prime minister mentioned in June that the government can appeal to Article 112 of the Thai Criminal Code, or so-called “lese majeste” law, which forbids threatening, insulting and defaming the Royal family. As the protesters demand the resignation of the incumbent prime minister and call for limited monarchy to be implemented, the government may interpret the rallies as a threat to the Thai King.

"We already have 112 of the criminal code and we don’t have a lot of problems, but now Article 112 has not been used because the king has kindly asked not to use it. Now people are violating this. So what does this mean, what do you all want? I have to say this today to create peace in the country," he said in a statement in June at the closing ceremony of the 35th ASEAN Summit in Bangkok.

After the Future Forward party, demanding reforms of the military-backed government, was banned by the court for allegedly accepting money from illegitimate sources in February 2020, people took to the streets, calling for the Thai monarchy to be reformed. The rallies were halted because of the coronavirus pandemic outbreak and resumed in July.

The second wave of the protests was triggered by the impact of COVID-19 restrictions, with the government enforcing lockdown and banning public gatherings. That time protesters demanded deeper changes for the society and called for providing women with the right to abortion and improving education system across the country.

Since 2014, when Prayuth Chan-o-cha seized power in Thailand, there has been a series of policy implementations that caused people’s discontent. In 2016, the government adopted a new constitution which introduced the military-appointed Senate with the power to appoint prime ministers. In 2019, the opposing Future Forward party took part in the General Election and was widely supported by the youth.