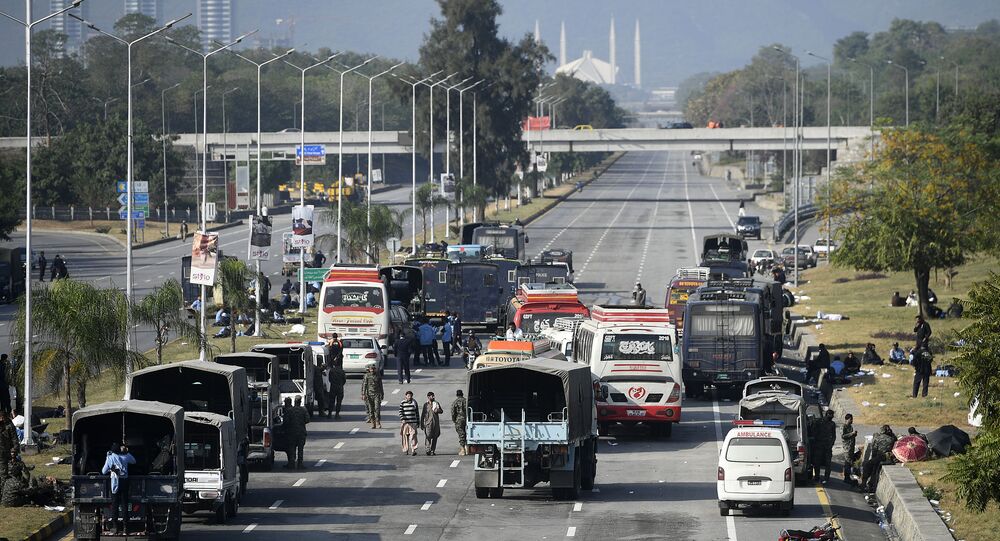 In statements, French President Emmanuel Macron defended the right of the nation's citizens to draw cartoons of the Prophet Muhammad, an act deemed blasphemous in Islam, and condemned the violence against French people on religious grounds.

Some of the entrances into Islamabad have been blocked off after a two-day anti-France rally in the neighbouring city of Rawalpindi threatened to spill over to the Pakistani capital, AFP reported. The road connecting the two cities was sealed off by the authorities leading to several thousand protesters gathering at the established roadblock.

Islamabad's residents have thus been forced to seek alternative routes into the capital, which remained open.

The measure was taken as the government seeks to tone down protests organised by the party Tehreek-Labaik Pakistan (TLP), which takes a hardline stance on religious matters. In addition to blocking the entrance to the capital, authorities cut off the range of mobile phone services on 15 November for 24 hours in an attempt to thwart the efforts to organise rallies. The services have since been restored.

Protests erupted in several Muslim countries, including Pakistan in light of statements made by French President Emmanuel Macron, who condemned religion-based violence against French citizens and defended their right to freedom of speech, including the ability to draw illustrations or cartoons of the Prophet Muhammad – a deed deemed blasphemous in Islam.

Islamic communities in numerous countries have called on Muslims to boycott French goods. Pakistan itself condemned Macron's remarks and accused his country of conducting a "systematic Islamophobic campaign". Prime Minister Imran Khan even called on his countrymen to counter what he described as the "repression" of Muslims in Europe.

Macron's statements on Islam came as a response to two terrorist attacks in France in October 2020 and were purportedly conducted over the publication of cartoons of the Islamic prophet by the satirical journal Charlie Hebdo on 1 September 2020. The first attack was committed on 16 October by an 18-year-old Muslim, who decapitated middle-school teacher Samuel Paty after he showed his students these cartoons during a freedom of speech class. Another attack took place at the Notre-Dame Basilica in Nice on 29 October, where a newly-arrived refugee from Tunisia murdered three people before being apprehended by the police.