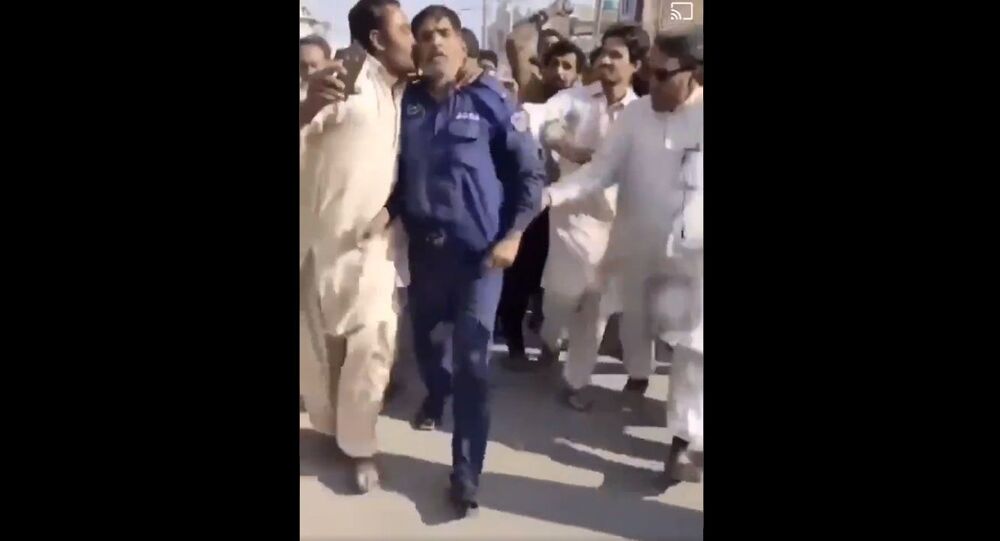 Pakistan has strict blasphemy laws carrying punishment and even the death sentence for anyone found guilty of insulting Islam or the prophet. Critics have long demanded an amendment to the archaic law, citing its unfair use against those who have been falsely targeted and persecuted minorities.

Videos have gone viral on social media, provoking condemnation from some people, showing locals cheering a man in Pakistan for killing a bank manager over a blasphemy allegation.

A “cold-blooded” murder of Malik Imran Hanif, a manager of the state-run bank National Bank of Pakistan, has led to furore in the country with several demanding justice for the man shot dead.

The video shows Ahmad Nawaz, the security guard who shot Hanif, leading a huge crowd and walking amidst loud cheers which were raised in support of Nawaz by those who supported the killing over alleged blasphemy.

Another killing for blasphemy in Islamic State Pakistan.
Ahmad Nawaz a security guard kills branch manager of National bank accusing him Blasphemy after heated argument. Look how he is greeted by crowd, kissing his hands with honour. All cultures or religions are not same sir. pic.twitter.com/57EoCa5kgp

According to Geo TV, Nawaz shot Hanif dead on Wednesday morning inside the bank in the country's Punjab province. The security guard was arrested after the incident and claimed that he killed the manager for committing blasphemy.

The family of the deceased has said that it was "cold-blooded murder" by the accused over a personal grudge.

According to the police, quoted by Dawn, the two had been at odds over some issue and the guard had attempted to shoot the manager a few months before. Another guard at the bank, present at the time of the attack, confirmed that he heard the gunshots after the manager arrived at 8.40am.

"Police are investigating the matter from all sides including the statement of the victim's family that Nawaz killed him to settle a personal grudge," a police officer was quoted by PTI as saying.

Although a section of people hailed the guard for the killing, several, including religious leaders, have demanded justice for the bank manager.

According to a 2019 report by Human Rights Watch, at least 1,472 people were charged under Pakistan’s blasphemy provisions between 1987 and 2016. In addition, although no executions have been carried out, at least 17 people convicted of blasphemy in the country were on death row at the time the report was released.