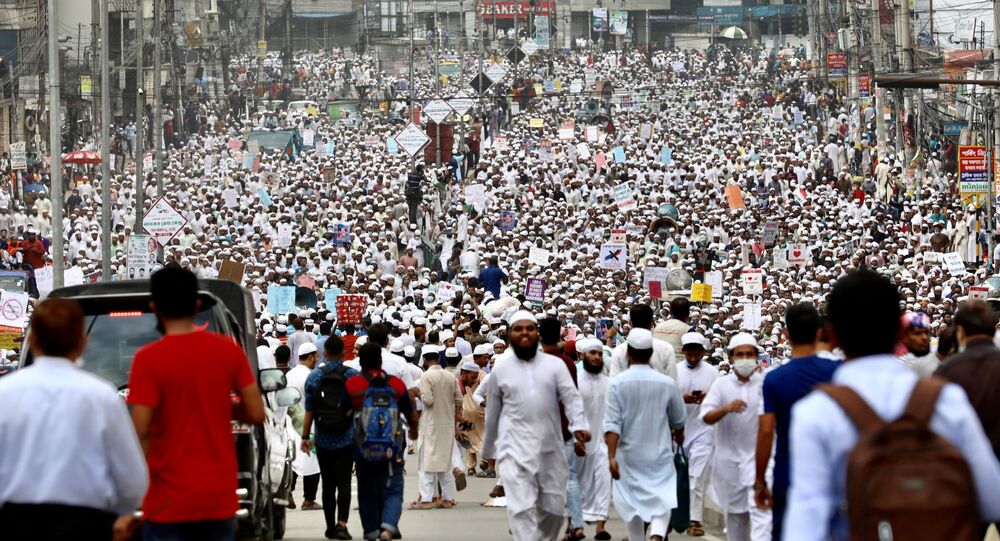 At first, people gathered near the country’s biggest mosque, Baitul Mukarram, and marched towards the French embassy.

After the police stopped the crowd in the Shantinagar area, people blocked roads on the nearby streets for several hours.

​Hifazat-e Islam Secretary General Junaid Babu Nagari said during the protest that Dhaka needs to cut diplomatic ties with Paris and boycott all French products, according to the news agency.

​The Islamist group also urged Bangladeshi authorities to officially condemn France. In addition, Nagari called on France to apologise to the Muslim world.

Over half a million Muslims marched in the streets of Bangladesh''s capital on Monday in the country''s largest protest yet against the French president''s support of freedom of expression that allow caricatures of the Prophet Muhammad Saw#BoycottFrenceProducts pic.twitter.com/N1So5KLOYx

© REUTERS / FRANCIS MASCARENHAS
Macron Photos Plastered on Roads Amid Protests in Indian Cities as Outrage Grows Among Muslims
​On October 21, Macron delivered a speech during a commemoration ceremony for the French history teacher, Samuel Paty, who was killed by a radicalized Chechen teenager after showing the caricatures to his students.

​The president stressed that France would not disavow the cartoons and continue to defend freedom of expression.

Macron’s speech was met with a backlash in the Muslim world, as many consider cartoons of Prophet Muhammad to be blasphemous. Amid calls to boycott French products, Macron has said that he understood the feelings of Muslims but maintained that radical Islam is a threat to all.