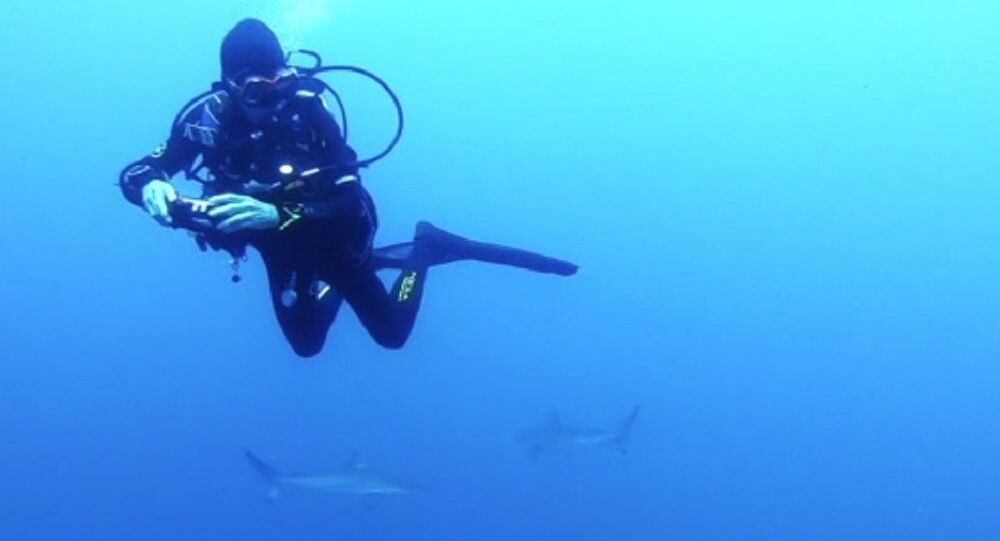 Australia has registered seven fatal shark attacks this year. In the most recent, a 13-year-old surfer was bitten on his foot, fingers, and upper leg at Town Beach in Port Macquarie.

Scuba diver Anita Ong, 38, found herself surrounded by a wall of some two hundred sharks while diving with her husband and friends off North Stradbroke Island - a popular diving spot in Australia, according to the Daily Mail.

The group went there after Anita's husband, Nick, spotted a large school of sharks the day before.

Nick deployed a surface marker buoy just as the sharks arrived, while Ms Ong made a decision to stay 20 metres below the surface on her own as the sharks surrounded her.

According to Ms Ong, as she performed a 360 move, she saw that the sharks were everywhere around her, above and below. At the same time, she pointed out that she wasn't scared at that moment but more excited.

© CC BY 2.0 / Hermanus Backpackers / Great white shark
Search Underway for Missing Aussie Surfer Bitten by Shark in Western Australia
As she started to ascend, the sharks still stayed near her.

"The sharks stayed with me the whole time. I ascended to 12 metres and the sharks were still with me", Ms Ong's said.

The diver was surprised that the sharks stayed close to her as they are usually frightened by the bubbles from a scuba tank and can be easily spooked by sudden moves.