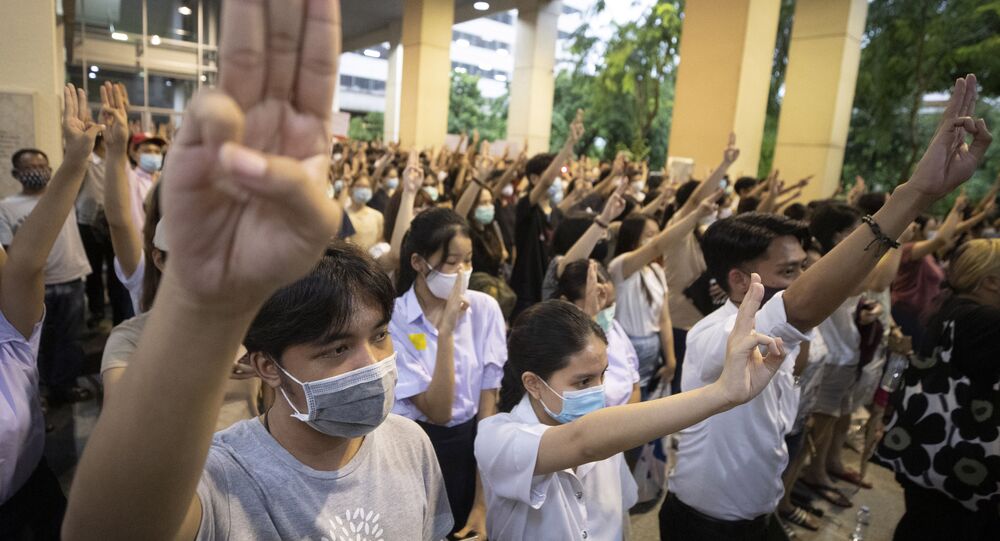 Bangkok Metro System Shut Down, Opposition Calls for Protests Amid State of Emergency

BANGKOK (Sputnik) - The underground metro system in the Thai capital of Bangkok has been completely shut down amid ongoing protests and the related state of emergency, operating firm MRT said on Saturday.

"For the safety and security of passengers, the MRT Blue Line and MRT Purple Line will be temporarily closed. When the situation resume to normal, we will resume service as soon as possible", MRT Bangkok Metro the company wrote on Facebook.

Earlier in the day, anonymous opposition accounts on social media circulated instructions to protest at every metro station entrance with a view to maintaining mobility.

URGENT: @BTS_SkyTrain has just announced that ALL skytrain stations across #Bangkok have been closed due to a #ม็อบ17ตุลา protest rally somewhere in the capital. This follows the news that the MRT subway closed their stations too #Thailand pic.twitter.com/7kGZsLfgr3

​A state of emergency was announced earlier in the week due to ongoing pro-democracy anti-government protests. It went into effect at dawn on Thursday and is set to last no longer than 30 days, banning gathering of more than five people and granting law enforcement special powers.

Protests in Thailand are now in their third month, with thousands of pro-democracy citizens calling for large-scale constitutional reform. The protesters demand the dissolution of what they call Prime Minister Priyat Chan-o-cha's military dictatorship — it came to power in a bloodless coup in 2014 but has since remodelled itself into a civilian form. They also call for a limitation of the monarchy's power and to scrap the strict laws prohibiting criticism of the king.