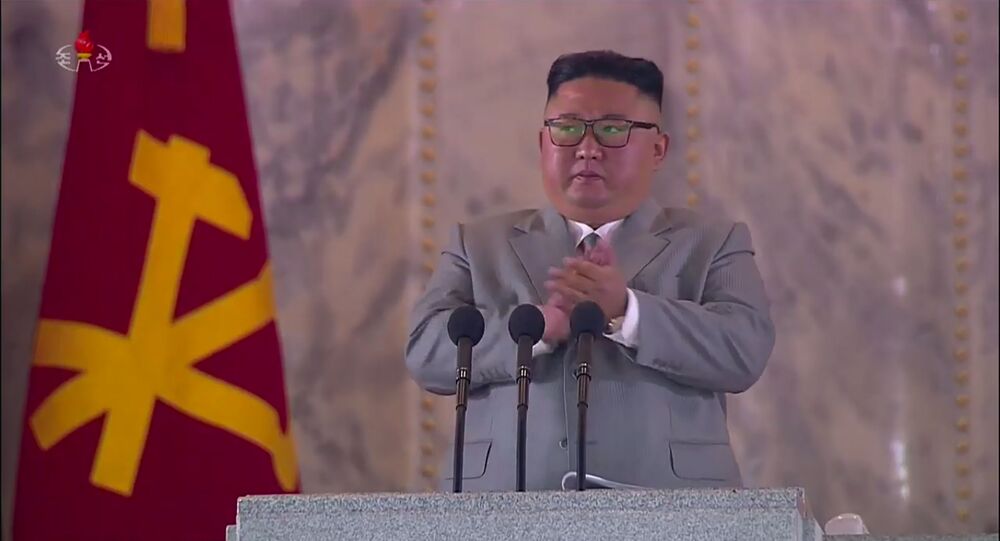 On Saturday, North Korea celebrated the 75th anniversary of its ruling Workers’ Party's foundation with a massive pre-dawn parade in Pyongyang featuring thousands of troops and hundreds of pieces of military equipment, with the country’s leader Kim Jong-un delivering an emotional speech.

Kim Jong-un displayed his emotional side during the pre-dawn military paradee held in Pyongyang on Saturday, timed to coincide with the 75th anniversary of the nation's ruling Workers’ Party.

The North Korean leader’s voice trembled and he removed his glasses briefly to seemingly wipe away tears while issuing an apology to the people of his country for perceived shortcomings in meeting their needs and expectations in difficult times, which he said were the result of international sanctions and natural disasters. Several times in his speech, the North Korean leader underscored that there are zero COVID-19 patients in his country.

“Our people have placed trust, as high as the sky and as deep as the sea, in me, but I have failed to always live up to it satisfactorily… I am really sorry for that,” he said, according to a translation of his comments in the Korea Times.

​Amid the ongoing display of the Democratic People's Republic of Korea (DPRK)’s military prowess, Kim Jong-un offered support to people around the world struggling with the COVID-19 pandemic, and voiced hopes for an improvement in ties with South Korea.

“Availing myself of this opportunity, I offer my heartfelt consolation to all those around the world who are still combating the disease caused by the malignant virus, and do hope from the bottom of my heart that health, happiness and laughter of all people would be guaranteed,” said Kim Jong-un.

While not mentioning the US in his speech, in a stern warning to adversaries, the North Korean leader said that he would “fully mobilise” his nuclear force if threatened.

The parade on 10 October featured thousands of troops and hundreds of pieces of military equipment, including tanks and mobile artillery as well as coastal defence systems, long-range artillery, air defences and other nuclear-capable missiles, including the Pukguksong-3, a new solid fuel, submarine-launched ballistic missile.

The show-stopper was a much-touted, never-before-seen intercontinental ballistic missile system.
Appearing at the parade’s finale, it was carried aboard transporter-erector vehicles equipped with 11 axles.

What Message Did Kim Jong-un Want to Send With Massive Nighttime Parade?