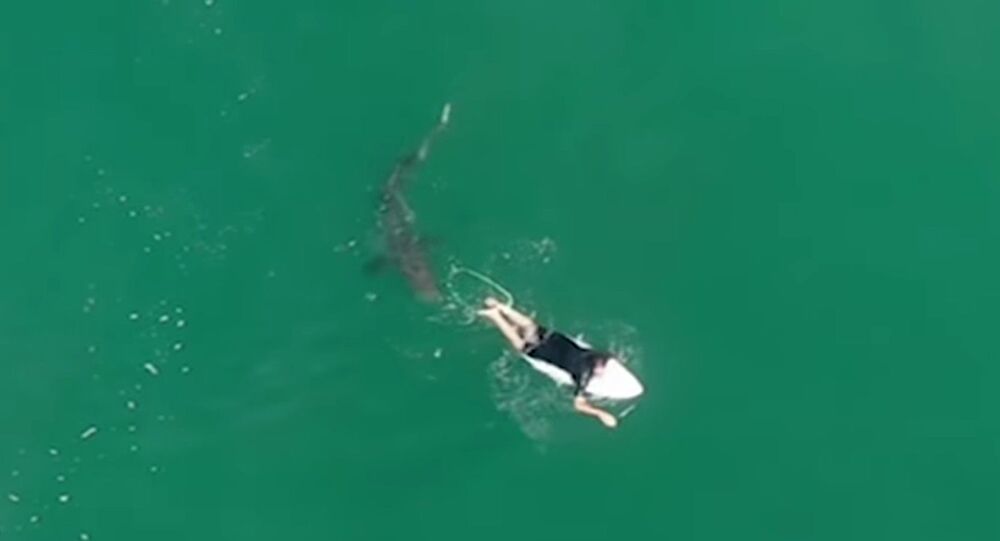 Professional Australian surfer Matt Wilkinson recently had quite the close encounter with a great white shark while catching some waves in New South Wales (NSW), and it was all filmed by a drone that alerted the surfer to the nearby predator.

The shocking encounter unfolded on Wednesday, while Wilkinson was traversing the waters off the coast of Ballina near Sharpes Beach.

“I was … just cruising on my own and I heard a splash and a noise and looked around and couldn’t see anything,” Wilkinson recalled in a statement. “Then the drone came down and told me that there was a dangerous shark in the area, return to the beach.”

As it turns out, the drone was operated by Surf Life Saving NSW as part of a partnership with the NSW Department of Primary Industries. In short, the drones are used to protect swimmers and alert lifeguards to any marine hazards, including sharks.

“I got to the shore feeling a bit weird, and the lifeguards showed me the footage, and I realized how close it came without knowing it was there. It looks like it’s going for my leg, and it’s changed its mind,” Wilkinson stated.

"It’s nice to know the drones go up and down the beach and can see what we can’t, and it makes you feel more comfortable. It makes other people aware that there are sharks out there but usually with no intention.”

Beau Monks, the drone’s operator, noted that the roughly 5-foot great white shark was spotted during his seventh flight of the day and had “sort of came out of nowhere.”

“It moved pretty fast,” Monks said in a statement. “I was tracking it and notified the lifeguards and used the speaker on the drone to get everyone out of the water. Within 10 seconds, it was at the surfer, and five seconds later it was gone.”

After the close encounter, the beach was completely evacuated and closed until the following day.

According to Surf Life Saving NSW CEO Steve Pearce, drones are the favored form of aerial surveillance for the monitoring program, especially since they’re preferred by locals and “they have proven themselves to be cheaper and more effective than helicopters.”

At present, the drones are used to monitor marine happenings at 34 beaches in New South Wales as part of the Aussie state’s $8 million initiative.