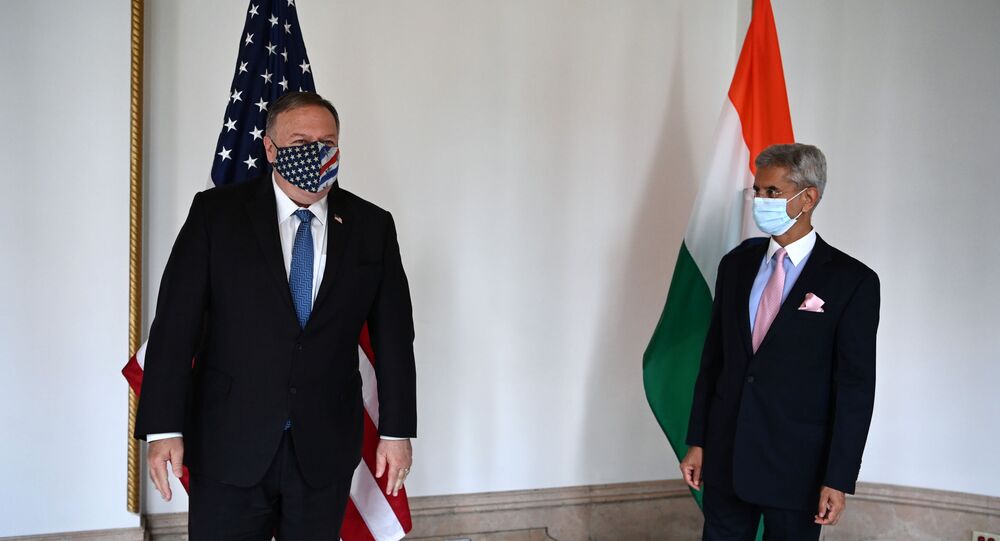 Beijing hopes countries will do more to build understanding and trust in the region and "promote regional peace, stability and development, and not the opposite", a spokesperson from the Chinese embassy in Japan said in a statement.

United States secretary of state Mike Pompeo has been spreading lies about China and "maliciously" creating confrontation, a spokesperson from the Chinese Embassy in Japan said on Wednesday.

© AFP 2020 / FRED DUFOUR
US, Indian Bans on Chinese Apps Violate WTO Trade Rules, Beijing Reportedly Says Amid Tech Trade Rows
China had always maintained that "multilateral cooperation should uphold the spirit of openness, tolerance and transparency" instead of "engaging in closed and exclusive 'small circles'," the spokesperson said regarding Pompeo's comments at the Indo-Pacific meeting in Tokyo.

"Pompeo has repeatedly fabricated lies about China and maliciously created political confrontation. We once again urge the US to abandon its Cold War mentality and ideological prejudice, stop unprovoked accusations and attacks against China and treat relations with China in a constructive manner," the spokesperson concluded.

The comments come days after Pompeo told the NHK in an interview in Tokyo that a "forceful" response was needed against China and urged India, Japan and Australia to form an alliance to counter Beijing's "coercive power".

Pompeo delivered his hardline speech against China at the Nixon Library and Museum in California in late July, where he called on the "free world" to "triumph" over China's "tyranny".

The only way to truly change communist China is to act not on the basis of what Chinese leaders say, but how they behave. And you can see American policy responding to this conclusion. President Reagan said that he dealt with the Soviet Union on the basis of “trust but verify.” When it comes to the CCP, I say we must distrust and verify," Pompeo said at the time.

Tensions between Washington and Beijing have flared in recent years in the South China Sea, which China has claimed as its historical territory and built military bases on artificial islands in the region. But the US has stated the sea is an international route while practising patrols with allied vessels in alleged freedom of navigation exercises.

© AFP 2020 / GREG BAKER
Indian Opposition Leader Rahul Gandhi Trolled for Saying He Would Have 'Thrown Out' Chinese Troops
Conflicts spiked further after border clashes erupted at the Line of Actual Control (LAC) in the Ladakh region, where 20 Indian soldiers were killed in hand-to-hand combat by Chinese military personnel.

The Trump administration launched a trade war with Beijing in 2018, leading to a major tech war after Huawei, ZTE, and over 70 Chinese tech companies were blacklisted in May last year, with Washington citing alleged national security concerns.

Beijing and numerous Chinese tech giants, including Huawei Technologies, TikTok's ByteDance and others, have routinely denied and condemned US accusations that their technologies spy on users on behalf of the Chinese government.