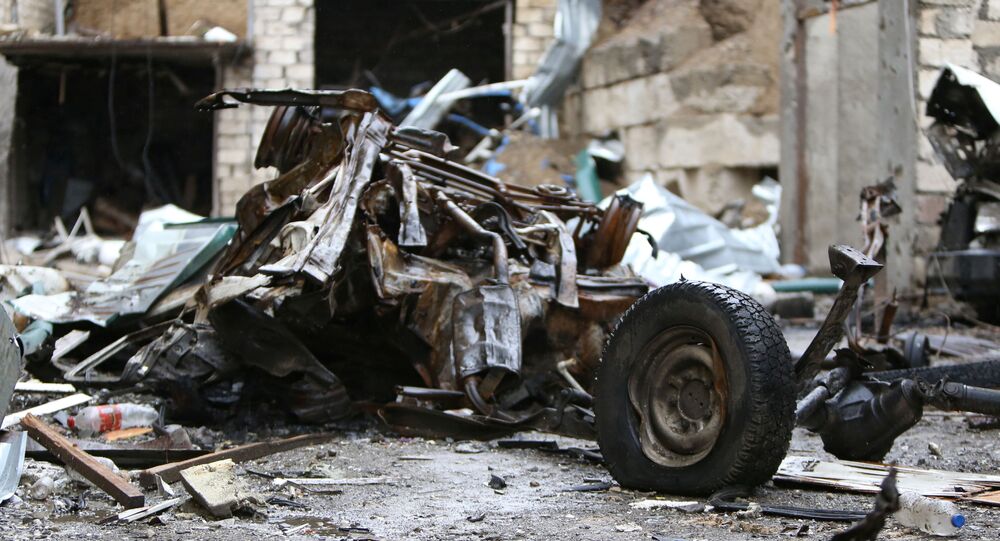 An armed conflict erupted on 27 September in the Nagorno-Karabakh region, bordering north-western Iran, between Azerbaijan on one side, and a breakaway republic supported by Armenia on the other. The hostilities have already led to the destruction of property and injuries to one Iranian as a result of miscalculated fire between the warring parties.

Iran's Defence Minister Amir Hatami has warned the parties in the ongoing Nagorno-Karabakh conflict against making any more accidental strikes on the country's territory. Hatami promised that otherwise Tehran would resort to "measures stronger than warnings", which the country previously issued to Azerbaijan and Armenia.

"The lives of citizens and the security of the holy soil of Islamic Iran are vital and significant issues, and it is by no means acceptable that bullets hit our country’s territory due to carelessness", Hatami said in a statement.

The minister added that Tehran will definitely take broader measures should its warnings fall on deaf ears.

© Sputnik / Карен Аветисян
A damaged building hit by the recent shelling is seen in Stepanakert, the self-proclaimed Republic of Nagorno-Karabakh.

Earlier, the authorities in a village in Khoda Afrin county, located in Iran's north-west, reported that several mortar shells had come in over the border and exploded on Iranian land, damaging property and resulting in injuries to a six-year-old child. It was not immediately clear which side, if not both, was responsible for the miscalculated fire.

Following decades of relative peace interrupted by lesser skirmishes, major hostilities broke out in the Nagorno-Karabakh region, populated mostly by ethnic Armenians, between Armenia and Azerbaijan on 27 September. The two countries have blamed each other for breaking the ceasefire brokered back in 1994 and renegotiated in 2016 after another round of hostilities.

© AFP 2020 / KAREN MINASYAN
Explained: Why Azerbaijan and Armenia are Clashing Over Nagorno-Karabakh

Since the resumption of the conflict at the end of September, both sides have reported inflicting serious losses to each other and also suffering casualties, including civilian ones. Other countries, including Iran, have called on the parties to stop the military operations and look for a peaceful solution to the conflict, but a dialogue between the two nations has still not started. Iran’s Foreign Ministry spokesperson stated on 5 October that Tehran had devised a plan to put an end to the current hostilities, calling on Yerevan and Baku to engage in talks, but did not reveal the details of the plan.