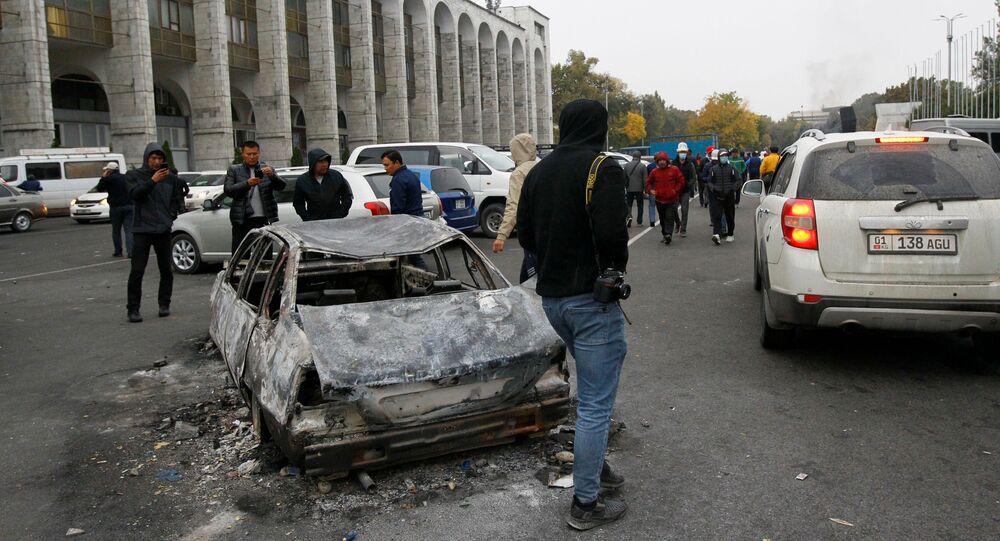 All You Need to Know About Protests in Kyrgyzstan

Monday saw the beginning of mass protests in Kyrgyzstan's capital Bishkek, which started after the announcement of the preliminary results from the 4 October parliamentary elections in the Central Asian country.

Kyrgyz President Sooronbay Jeenbekov said on Tuesday that some political forces had tried to seize power illegally overnight and called on the leaders of political parties to "calm down their supporters".

"I urge my compatriots to remain calm and not succumb to provocations", he pointed out, commenting on the mass protests in the Kyrgyz capital Bishkek.

Jeenbekov added that he has ordered the security forces not to open fire at protesters.

"In order to avoid bloodshed, I have ordered the security forces not to open fire. Until now, we have taken all measures to prevent the situation from escalating. Peace in the country and stability in society are above the parliamentary mandate", the head of state said.

The statement comes after Jeenbekov's spokeswoman Tolgonay Stamaliyeva said the president admitted that the results of the country's 4 October parliamentary elections could be anulled.

She added that the head of state remains in Bishkek, is "controlling the situation and expresses confidence that all political forces will put the interests of the country above their own, will not allow a split in society, and other fears that worry the country's citizens".

Jeenbekov is due to meet with representatives of all 16 political parties in the country later on Tuesday.

This followed protesters in Bishkek on Monday evening breaking into an area of the White House where the parliament and the presidential administration of Kyrgyzstan are situated.

© REUTERS / VLADIMIR PIROGOV
Protesters try to break into the government headquarters during a rally against the result of a parliamentary election in Bishkek, Kyrgyzstan, October 5, 2020

The mass protests broke out after Kyrgyzstan voted in a general election on Sunday and the preliminary results revealed that only four parties collected enough votes to get seats in the legislature, including two pro-government parties — Birimdik and Mekenim Kyrgyzstan — and two centrist parties — the Kyrgyzstan Party and Butun Kyrgyzstan.

About 2,000 supporters of those parties that failed to pass the seven percent vote threshold to gain parliamentary seats gathered at Bishkek's Ala-Too Square on Monday morning to demand a revision of election results. They accused the government of falsifying the election results and vote buying.

Police reportedly used rubber bullets, tear gas, and stun grenades in an attempt to disperse protesters who threw stones at police officers, also burning down a patrol car and damaging six ambulances. At least one person died and 590 people, including around 40 policemen, were injured in the clashes. Right now, around 1,500 people reportedly remain on Ala-Too Square.

The Shanghai Cooperation Organisation (SCO) has, meanwhile, described Sunday's elections as free and legitimate, in what was echoed by the Organisation for Security and Co-operation in Europe (OSCE), which praised the work of Kyrgyzstan's Central Elections Commission (CEC).

The CEC, in turn, pledged to investigate complaints related to alleged violations at 31 polling stations during the voting.