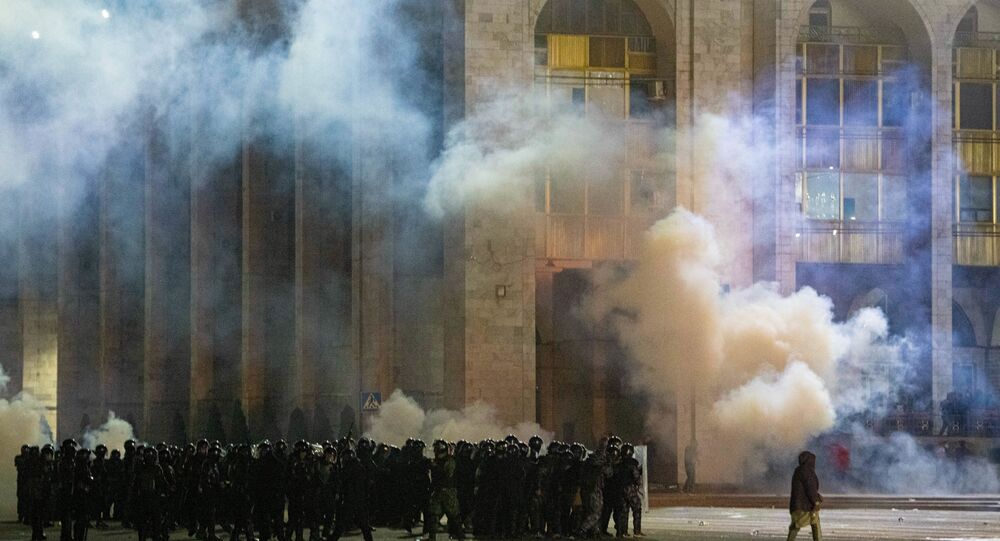 The capital of Kyrgyzstan saw mass protests after the preliminary results of Sunday's parliamentary election, supporting the parties that failed to qualify and demanding a re-vote.

Protesters in Bishkek have broken into an area of the White House where the parliament and the presidential administration of Kyrgyzstan are situated, according to a Sputnik correspondent.

Protesters supporting the parties that did not make it into parliament rammed the gate with a truck and then rushed inside.

According to witnesses, a convoy of cars left the parliament building a few minutes before the incident. When the protesters arrived, there were no officials or guards inside the building.

The caption says: "The protesters entered the White House. The son of former President Almazbek Atambayev, Kadyr Atambayev, was taken into the building".

The caption says: "Territory near the White House in Kyrgyzstan right now".

The Kyrgyz capital saw protests after the preliminary results of parliamentary elections were released on Sunday. An estimated 2,000 demonstrators gathered on Monday in Bishkek to demand a new vote and support parties that did not pass the seven percent vote threshold to gain seats in parliament.

The political party Birimdik ("Unity"), which is leading in the parliamentary election, agreed to a re-vote "if they are announced".

Amid the protests, Kyrgyz President Sooronbay Jeenbekov on Tuesday announced plans to meet with the leaders of the political parties that participated in the election.