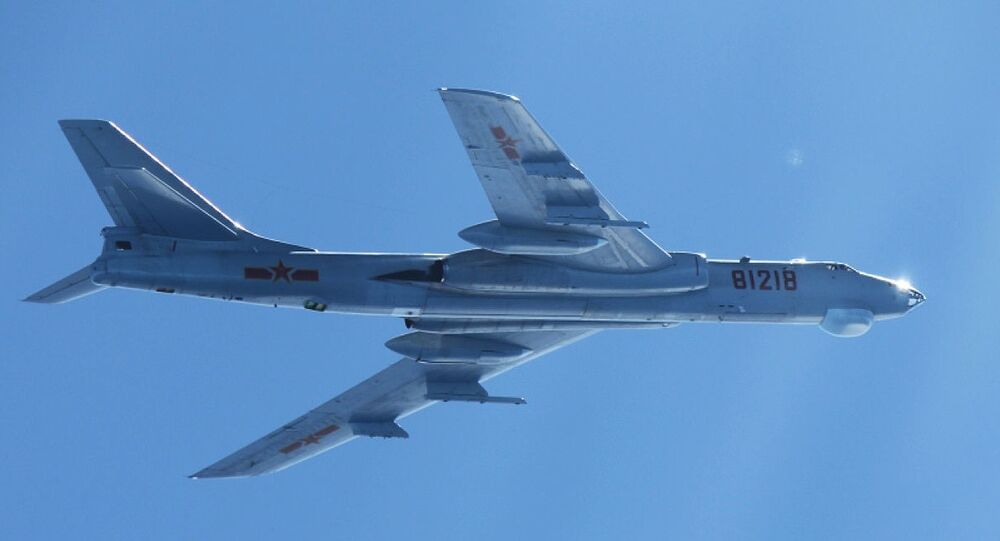 The footage was published following US Under Secretary of State for Economic Growth, Energy and Environment Keith Krach’s visit to Taiwan last week.

In the two-minute clip called "The god of war H-6K goes on the attack", nuclear-capable Chinese bombers are seen lifting off from a desert airfield and one of them then launching a missile at the target, which Western media and some Twitter users have claimed was Andersen Air Force Base, located on the US Pacific island of Guam.

Neither the Chinese Defence Ministry nor the US Indo-Pacific Command has commented on the video yet.

The clip was released as China conducted military exercises near the Taiwan Strait late last week, drills which Beijing said were aimed at protecting the country’s territorial integrity following US Under Secretary of State for Economic Growth, Energy and Environment Keith Krach’s visit to Taiwan on 17 September.

According to the Chinese Foreign Ministry, the visit violated the One-China principle and the three China-US joint communiques on developing bilateral dialogue.

China's Defence Ministry spokesman Ren Guoqiang, in turn, accused the US and Taiwan of "stepping up collusion, frequently causing disturbances", even though he did not make any reference to Krach’s visit.

He said that the Chinese People’s Liberation Army's (PLA) Eastern Theatre Command was conducting a live-fire drill in the Taiwan Strait, which Rena added was necessary to safeguard national sovereignty due to “the current situation in the region”.

© CC0
US Intends to Force China to 'Fire First Shot' Over Taiwan, Military Analysts Say
In early August, China objected to the planned visit by US Health and Human Services Secretary Alex Azar to Taiwan, but Secretary of State Mike Pompeo responded by saying that "cabinet members have travelled to Taiwan previously", adding that this visit did not run counter to the previous policy.

Although officially the US follows the One-China policy, which does not recognise Taiwan as an independent entity, Washington also has trade and business ties with the island and supplies weapons to it.

Beijing, for its part, sees Taiwan as a Chinese territory, which will eventually have to reunify with mainland China.