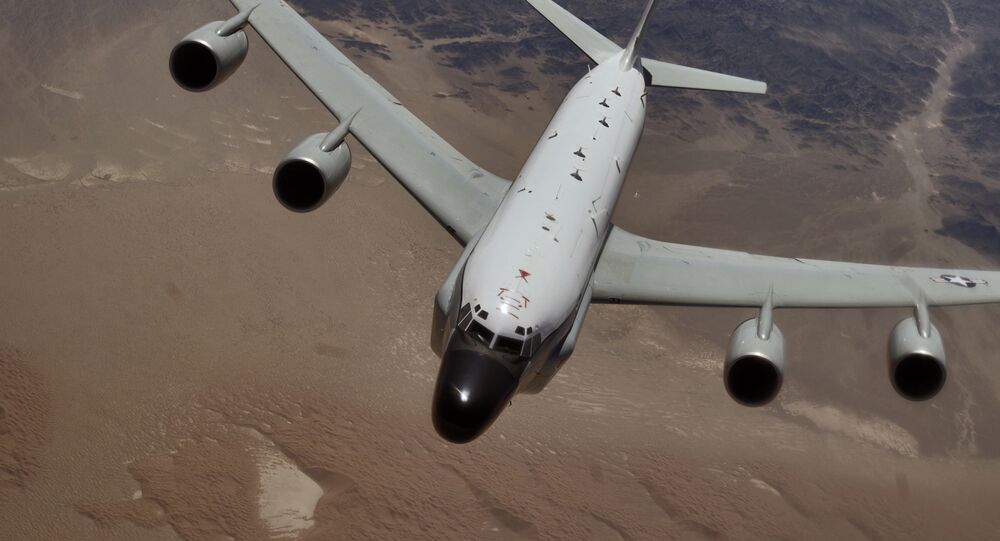 Earlier this month, a US spy plane was observed seemingly changing its unique transponder code to disguise itself as a Malaysian civilian aircraft. While a top US Air Force leader has refused to confirm or deny the incident, swearing the US was “following the rules that day,” the claims of duplicity have been independently confirmed.

At the Air Force Association's virtual Air, Space & Cyber conference on Wednesday, Gen. Kenneth Wilsbach, the commander of Pacific Air Forces, refused to confirm or deny the US aircraft’s actions, but objected to the term “spoofing” being used to describe them.

"I know we follow the rules for international airspace, and we were following the rules that day," is all Wilsbach said, according to Military.com.

On September 8, a US Air Force RC-135W Rivet Joint signals intelligence aircraft took off from Kadena Air Force Base in Okinawa, Japan, bound for the South China Sea. While multiple daily US spy plane flights across the disputed waterway have become common in recent months, this flight caught the eye of the South China Sea Probing Initiative (SCSPI) think tank after it “disappeared” from international aircraft tracking programs and was “replaced” by a Malaysian aircraft on the same flight path.

​The seemingly Malaysian plane then flew tightly bound laps between China’s Hainan Island and the Paracel Islands, which China calls the Xisha Islands and claims as part of its territory, before exiting the South China Sea, at which point it “became” an RC-135W again, Sputnik reported.

The plane changed its identity on aircraft tracking programs by turning off one transponder and turning on another. The “Mode S” transponder code, broadcast in hexadecimal format, is assigned by the UN-governed International Civil Aviation Organization (ICAO) and gives the aircraft a unique identification in the skies. Moreover, the transponder tells other aircraft as well as ground controllers who and where the aircraft is, helping to ensure safety in the skies.

On Friday, the SCSPI published a report based on independent verification of its claims, which proved this was what the RC-135W did on September 9. Moreover, the think tank has documented at least two other cases of US spy planes “spoofing” civilian aircraft - in both cases adopting Malaysian transponder codes.

The SCSPI’s claims were verified by the Chinese Foreign Ministry and by Steffan Watkins, an independent research consultant based in Ottawa, Canada, who used open-source intelligence, several Automatic Dependent Surveillance-Broadcast (ADS-B) databases and on-site photos by amateur photographers to do so.

...and FlightAware takes it away with the best sensor data of the entire flight, almost right from take-off.

​In all three instances, the US spy planes remained in international airspace, but by pretending to be civilian aircraft while performing a military mission, they risk confusing Chinese air defense systems into making mistakes in the other direction as well: assuming that civilian aircraft are in fact military ones.

The concern is far from idle: multiple civilian airliners have been shot down during tense air defense situations because they were mistaken for military aircraft, including the US Navy’s downing of Iran Air Flight 655 in 1988 and the Soviet Union’s downing of Korean Air Lines Flight 007 in 1983, both of which killed hundreds of innocent people.

However, just days earlier, a US spy plane did violate Chinese airspace: on August 25, a U-2 Dragon Lady high altitude spy plane blatantly flew through a “no-fly zone” established in the Yellow Sea for safety reasons during live-fire exercises by the People’s Liberation Army Navy. The Chinese Ministry of Defense blasted the move as “pure provocation,” noting the incident had disrupted the drills and could easily lead to misunderstandings.

However, Wilsbach loudly celebrated this action at the Wednesday conference, saying the US refused to recognize the no-fly zone and "chose to fly there anyway [because] it was within our rights to do so in international airspace."

"We fly the U-2 almost every day, and we particularly look at Russia, China and North Korea with the U-2," Wilsbach said, according to Military.com. "It wasn't necessarily a one-off [incident] in the fact that it was flying in a track that we frequently fly in."