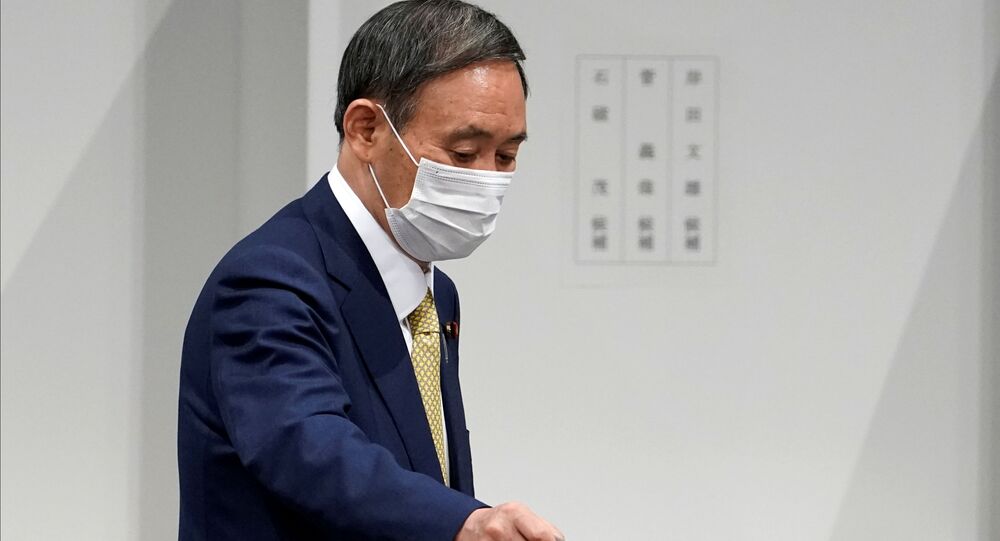 Earlier, the entire government of Japan has resigned, each of the ministers submitted relevant requests to the country's outgoing prime minister, Shinzo Abe, the Kyodo news agency reported.

The new chairman of the ruling Liberal Democratic Party in Japan, Yoshihide Suga, was confirmed on Wednesday as the country's prime minister.

The voting procedure was broadcast live on the website of the lower house of the National Diet, Japan's parliament. 314 legislators voted for Suga; in total, 462 ballots were recognised as valid.

The upper house of the Japanese parliament also confirmed his candidacy; a total of 142 out of 240 valid upper house ballots supported Suga.

The House of Representatives met in an extraordinary session on Wednesday to elect a new prime minister to form a government.

Earlier in the day, Kyodo reported that the entire government of Japan had resigned. According to the Japanese news agency, each of the ministers submitted relevant requests to the country's longest-serving prime minister, Shinzo Abe.

Yoshihide Suga served as chief cabinet secretary to outgoing premier Shinzo Abe. The need to elect a new prime minister came at the end of August, after Abe announced his intention to resign in connection with a chronic illness. He remained in office until the election of the new head of the cabinet.

© REUTERS / Kim Kyung Hoon
Yoshihide Suga: What We Know About the Frontrunner in Japan’s Prime Minister Race
Japan's new Chief Cabinet Secretary Katsunobu Kato revealed on Wednesday the new composition of the cabinet, which was formed in connection with Shinzo Abe's resignation as the prime minister and the appointment of Yoshihide Suga to the high post.

Toshimitsu Motegi retained the post of the foreign minister. Hiroshi Kajiyama, serving as Japan's minister of economy, trade and industry, and also the minister for economic cooperation with Russia, retained both posts. Aso Taro will remain the finance minister in the new cabinet.

Japanese media reported on Monday that Suga was going to keep Taro Aso as the deputy prime minister and finance chief in his new cabinet. He iss also reportedly considering the appointment of Health Minister Katsunobu Kato as the chief cabinet secretary.