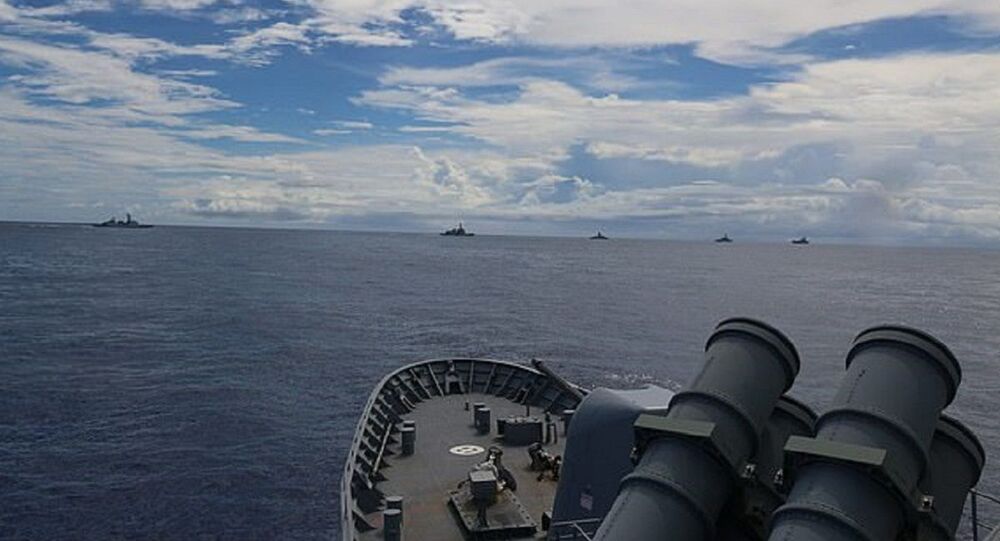 On Sunday, Australia’s Department of Foreign Affairs and Trade Secretary Frances Adamson urged Canberra to “take action” so as to tackle the “direct challenge” posed by what she described as China's assertiveness in the Indo-Pacific region and beyond.

Australia has joined naval drills conducted by the US, South Korea, and Japan in the waters off Guam in the Indo-Pacific region, where warships earlier practised surface and submarine warfare, as well as live-fire exercises.

The US-led Exercise Pacific Vanguard takes place amid Washington’s efforts to build up alliances in response to what the White House perceives as China’s growing expansion in the South Pacific.

From 12 SEP, Pacific Vanguard 20, the multilateral exercise with @USNavy, @Australian_Navy and Republic of Korea Navy, has started. JMSDF will continue to contribute to peace and stability of the region by conducting exercises with the other navies.🇯🇵🇺🇸🇦🇺🇰🇷 pic.twitter.com/XhX9KrGG9h

“The increasing complexity of our security environment highlights the importance of maintaining and growing our regional partnerships. Ours is a strong community built on shared interests, and activities like Exercise Pacific Vanguard increase our ability to contribute to the peace and stability of the Indo-Pacific”, she underscored.

Reynolds was echoed by Australian Maritime Task Group Commander Phillipa Hay, who described the exercises as “an invaluable opportunity to increase the Royal Australian Navy's understanding and experience” by collaborating with its US, South Korean, and Japanese counterparts.

© AP Photo / Renato Etac
Beijing 'Flexing Muscles' the Most in South China Sea US Defence Secretary Esper Says
Additionally, Australia is mulling joining a regional trade alliance with India, Japan, and the US called “The Quad”, which is expected to help Australia reduce its reliance on trade with China amid increasing tensions between Beijing and Canberra. China remains Australia’s biggest trade partner in terms of imports and exports.

The Quad grouping was initiated by US Deputy Secretary of State Stephen Biegun, who told reporters earlier this month that “the Indo-Pacific region is actually lacking in strong multilateral structures” and that regional nations “don‘t have anything of the fortitude of NATO or the European Union”.

He spoke after Australia’s Department of Foreign Affairs and Trade Secretary Frances Adamson stressed the importance of her country taking action to resolve the “direct challenge” posed by what she described as China's increasing assertiveness in the Indo-Pacific.

“We've seen China seeking to assert itself in this region, in the Indo-Pacific and globally, in ways that suits its interests but don't suit the interests of countries like Australia”, Adamson claimed.

Canberra’s relations with Beijing have worsened since Australian Prime Minister Scott Morrison called for an independent inquiry into the origins of the coronavirus pandemic in May. The US has repeatedly suggested that COVID-19 may have come from a bio-lab in Wuhan, China, allegations that Beijing vehemently rejects.

The Chinese government, in turn, slapped tough tariffs on Australian farmers, including an 80 percent tax on barley, in a move that came amid Morrison bolstering ties with the US. Washington, for its part, is reportedly pressuring Canberra to step up freedom of navigation patrols in the South China Sea, after Australia asserted that Beijing has "no legal basis" for its maritime claims in the disputed waters.

Beijing has long considered numerous islands in the South China Sea its sovereign territory, while several other countries have also asserted sovereignty claims over portions of the area. The US has no the island-related claims, but it continues conducting freedom of navigation missions in the area, which have been rejected by China as a “violation of international law”.