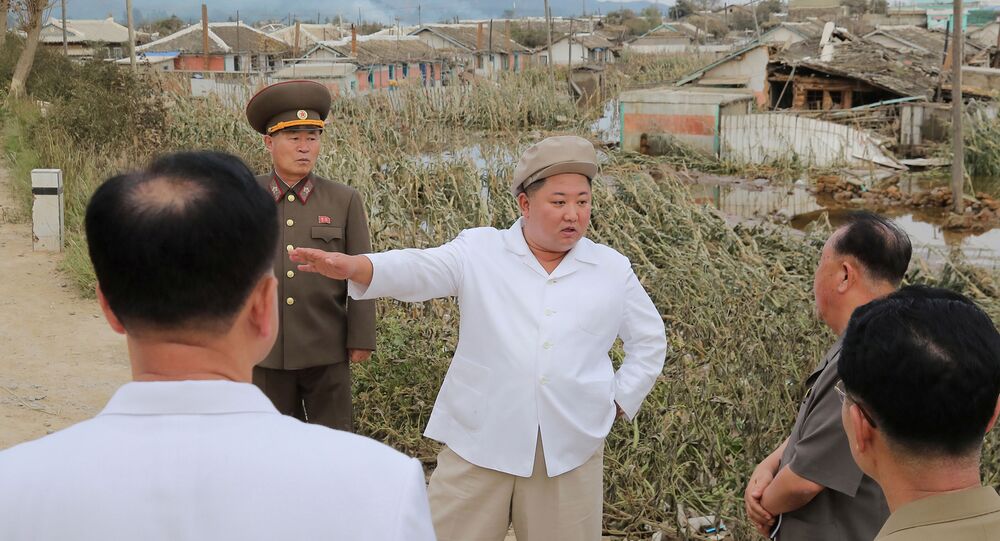 MOSCOW (Sputnik) - North Korean leader Kim Jong Un has ordered a comprehensive political and financial assistance by the country's capital of Pyongyang to the provinces of South and North Hamgyong, hit hard by ongoing typhoons, the Korean Central News Agency reported on Sunday.

Kim personally visited the typhoon-affected areas on Saturday with a delegation of the Workers' Party of Korea members as well as government and military officials, according to the news agency.

"The Supreme Leader underscored the need to make the recovery campaign from damage an important political work and an occasion of consolidating the single-minded unity, not just an economic and business work for eradicating the aftermath of natural disasters, and said that it would be good to make the Capital City positively aid the provinces so as to make the noble spiritual and moral virtues of taking preferential care of those living a difficult life and overcoming difficulties while sharing joy and sorrow with them all the time in the whole society a socialist custom", the KCNA said.

According to the state media, the typhoon in the South and North Hamgyong provinces has destroyed more than combined 2,000 dwellings along the coastal area and swamped numerous public buildings and farmlands.

"Learning about the growth of the crops damaged by the typhoon, he called for taking positive agricultural and technological measures for minimizing the reduction of the yield", the KCNA added.

Kim reportedly ordered that logistical arrangements be made for a team of construction workers and the necessary equipment to be swiftly transported to the affected area to repair the damaged infrastructure.

Additionally, the WPK Central Committee will be sending elite party members to the two affected provinces — a 12,000-strong team to each — to manage the recovery campaign, specifically by mobilizing the youth and the military, Kim said in an open letter to the party, as quoted by the KCNA.

The loss of crops is, perhaps, the hardest hit for North Korea's struggling agriculture. Shortage of crop production due to natural disasters, such as drought and heavy rains, brought some 40 percent of the country's population on the verge of hunger last year, according to the UN Food and Agriculture Organization and the World Food Program.