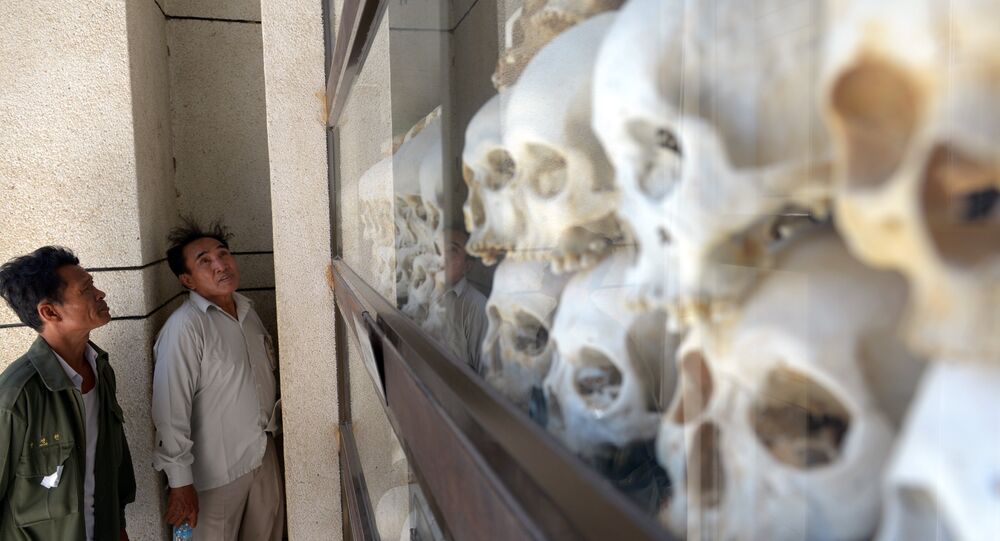 The revelations surrounding Cambodia's Khmer Rouge regime have become totemic as examples of the hideous crimes committed by governments throughout the 20th century.

The life of the infamous Khmer Rouge commander, known as Comrade Duch, who oversaw Cambodia's notorious Tuol Sleng prison, came to an end on Wednesday.

After battling poor health, the 77-year old, who in his youth was the head of the ultra-nationalist government's internal security and was responsible for the deaths of at least 14,000 people, died at Phnom Penh hospital in the early hours of the day.

Youk Chhang, the director of the Documentation Center of Cambodia, which conducts research on the Khmer Rouge regime said that the former jailer's death was a reminder that justice is a "long and difficult" process.

"Perhaps it can bring some satisfaction to the living, and the fallen can now rest in peace", he added.

In 2010, Duch became the first Khmer Rouge leader to be held responsible for the atrocities committed under the agrarian-communist state, which is estimated to have killed around 1.7 million people - a quarter of Cambodia’s population - from 1975 and 1979.

Duch headed Tuol Sleng, a secondary school-turned prison under the Khmer Rouge government, where he administered a system of torture and execution, resulting in the deaths of thousands of men, women, and children.

He was convicted for crimes against humanity the same year and later sentenced to life imprisonment after a UN-backed tribunal rejected his appeal that he was a junior commander following orders from his superiors.

Duch, a former maths teacher whose real name is Kaing Guek Eav, had expressed regret for his actions by the time of his trial.

Just days later he asked to be acquitted and released, claiming that he was following commands and feared for his own life and for his family. This enraged victims’ families and raised doubt about the sincerity of his confession.

During his tenure as head of the Khmer Rouge's security centre in Phnom Penh, prisoners were sometimes forced to give detailed confessions of their disloyalty to the government, as well as implicating friends and relatives in their alleged crimes.

Primarily serving as the final resting place for those purged from within the political apparatus, the "guilty" were later driven out to the fields known as 'Choeung Ek' before being executed, often through bludgeoning. The victims were regularly forced to dig their own graves.

He was killed shortly after. Here’s Hamill’s brother Rob, an Olympic rower, confronting ‘Comrade Duch’ (chairman of S21 1975-1979 and almost certainly ordered Hamill’s execution) at his trial at the U.N in 2009 - “I’ve imagined your scrotum electrified” https://t.co/MCzLiBiArt

​Photographer and author Nic Dunlop, who discovered the commander in his hiding place near the Thai border in 1999, outlined Duch's "ruthless efficiency" as a prison overlord.

“Nothing in the former schoolhouse took place without Duch’s approval. His control was total”, he wrote.

The guards were mostly teenage boys from poor backgrounds swept up by the regime who were ordered to “smash to bits” the traitors and counter-revolutionaries who had been unfortunate enough to end up under Duch's oversight.

Victims included officials linked to the former Lon Nol government, alongside intellectuals - sometimes indicated by the wearing of glasses - as well as ethnic minorities, those with alleged links to the KGB or CIA, and those dubbed 'New People' (urban dwellers).

Only a dozen prisoners are said to have survived and every former inhabitant of Tuol Sleng is presumed dead already, according to Duch's testimony in 2009.

Kaing Guek Eav, or "Comrade Duch," is dead. At Tuol Sleng prison he oversaw the torture & execution of around 18,000 people. Visiting the site of his crimes in 2015 was a deeply moving experience. Sadly, there is still a long way to go for accountability & justice in Cambodia. pic.twitter.com/4m2MKvcPrN

​How did it happen?

The Khmer Rouge came to power in the aftermath of the American bombing of Indochina and overthrew the US-installed military dictatorship of Lon Nol.

Guided by a form of primitive communism, the regime's prime minister, Pol Pot, sought to return Cambodian society to 'Year Zero' and liquidate the very concept of modern civilisation.

Hundreds of thousands of educated people, academics, doctors, and other professionals were tortured and killed. Money was abolished, and those living in the urban centres were forcibly relocated to farming collectives in the countryside.

The consequences of the US bombing campaign, as well as disease and overwork, led to widespread starvation across the country. While stopping short of the word "genocide", author Philip Short describes the ethnic targeting of Vietnamese and other minorities as a "crime against humanity".

© AP Photo / Christoph Froehder
FILE - In this April 17, 1975 , file photo, a Khmer Rouge soldier waves his pistol and orders store owners to abandon their shops in Phnom Penh, Cambodia on as the capital fell to the communist forces

In 1978, Cambodia was invaded by Vietnam which led to the toppling of the Khmer Rouge government. Some state officials fled to Thailand where they found a safe haven, while others were later captured.

After hiding on the Thai border, in 1986 Duch fled to China and worked as a Khmer expert at the Beijing Foreign Language Institute. A year later, he returned to the Thai-Cambodian border to meet with the Khmer Rouge remnant fighting against the pro-Vietnamese government.

Serving as an official for Pol Pot's government in exile at Camp 505 after the formal end of the war in 1991, he moved with his family to a village close to the Thai border and worked as a teacher.

After the publication of his interview with Nic Dunlop, Duch surrendered to the new Cambodian authorities.

Since Duch’s trial, the UN tribunal has convicted just two top Khmer Rouge leaders for genocide, while two others died before they could be sentenced.