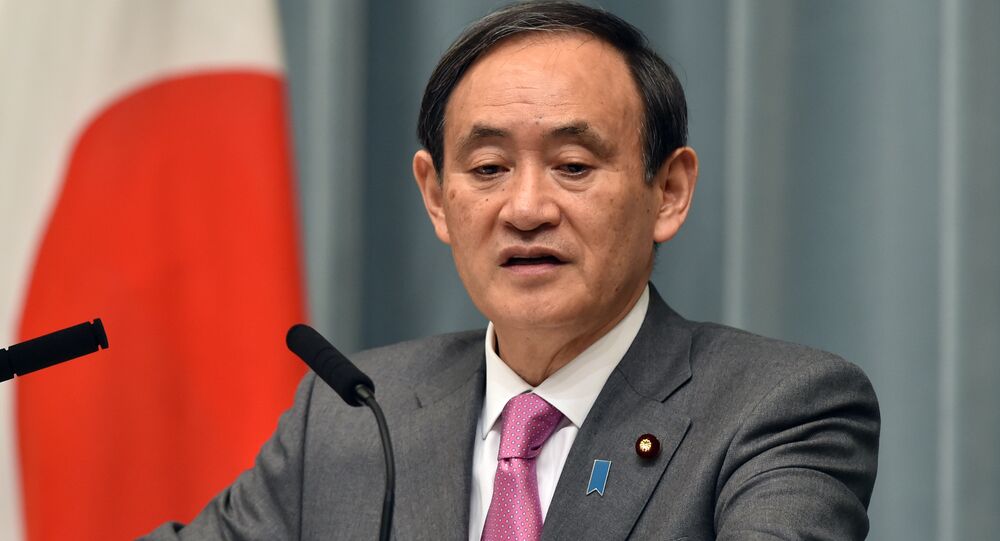 Japan's Chief Cabinet Secretary Yoshihide Suga announced on Wednesday that he intended to "maintain and push forward" the "Abenomics" stimulus policies spearheaded by outgoing Japanese Prime Minister Shinzo Abe if he were to become the next premier, reported Reuters.

After coming to power, Shinzo Abe pledged to revive the then-flagging Japanese economy, laying down “three arrows” of monetary, fiscal and supply-side policy that were subsequently dubbed “Abenomics”.

The top aide to Shinzo Abe, who is leaving office due to ulcerative colitis, also said he would pursue the relationship the government has had in place with the Bank of Japan under the administration of the longest-serving Japanese head of government.

The statements were made at a news conference where Suga, 71, announced his decision to run in the ruling party's leadership race.

Abe officially announced his intention to step down on 28 August.

© REUTERS / Issei Kato
Fumio Kishida, policy chief of Japan's ruling Liberal Democratic Party (LDP) and former Foreign Minister of Japan, raises his fist with his fellow lawmakers as he announced to participate in the LDP leadership election to choose the successor of Prime Minister Shinzo Abe, in Tokyo, Japan September 1, 2020.

Instead of the traditional voting system, in place since 2014, where the party’s presidential race is supposed to include an equal proportion of parliamentary members and rank-and-file members, the LDP has opted for an expedited process, favoring lawmakers.

This system sets one vote per sitting LDP parliamentary member (394) and three votes per LDP prefectural chapter (141) for a total of 535 votes. A candidate needs to secure a majority of the votes - 268.

According to The Japan Times, Suga is a firm favourite, having secured 264 votes of the 268 he needs to win, after garnering support from five of LDP’s seven biggest factions.

In another unexpected twist, the LDP general council decided that the special leadership election will present the winner with only a one-year term in office, set to expire in September 2021.

Yoshihide Suga has emerged as a front-runner in the race for PM as somewhat of a dark horse, claim experts cited by the outlet.

Unaffiliated with any faction, Suga is suggested as having won support as the “continuity” candidate. By rallying behind Yoshihide Suga, suggest analysts, the LDP is, in effect, extending the current administration to deal with the challenges of 2020, such as the COVID-19 pandemic, looming economic recession, and the Olympics, scheduled for 23 July to 8 August 2021 in Tokyo, postponed in March over the health crisis from the original date of 24 July and 9 August 2020.

Suga served as Abe’s right-hand-man during the latter’s return to the prime minister's chair in 2012 after a chronic disease caused him to abandon the premiership in 2007.

The aide was credited with helping Abe’s government navigate choppy waters, when top-ranking officials of the judicial administration were suspected of illicit activity, the flack received over lack of progress surrounding the issue of Japanese citizens who were abducted by North Korean agents in the 1970s and 1980s, and the casino bribery scandal, to name a few.

As the economy reels from the impact of the coronavirus pandemic, Suga has frequently emphasized the importance of continuing stimulus measures to help it rebound.

© REUTERS / Kyodo
Japan's Chief Cabinet Secretary Yoshihide Suga (C) is surrounded by reporters as he holds an emergency news conference following the eruption of a volcano in southern Japan, at prime minister Shinzo Abe's official residence in Tokyo, in this photo taken by Kyodo May 29, 2015

Some of the projects Suga’s name was linked with are the decision of the Prime Minister Shinzo Abe's government to pass legislation in July 2018 to legalize casinos in the hopes gambling tourism might help boost the lackluster economy.

Supporting tourism was also touted by the Chief cabinet Secretary, as a target of attracting 60 million foreign tourists by 2030 was set.

Suga was cited as expounding on the need to keep hotels and traditional inns afloat, calling for subsidies for domestic travel.

On the Tokyo Olympics, Suga said:

“We want to make sure they are a success.”

On foreign policy Suga has been noted for echoing Shinzo Abe’s views, while sidestepping moves that might be construed as offensive, such as visiting the controversial Yasukuni war shrine, perceived by many in Asia as a symbol of Japan’s past militarism.