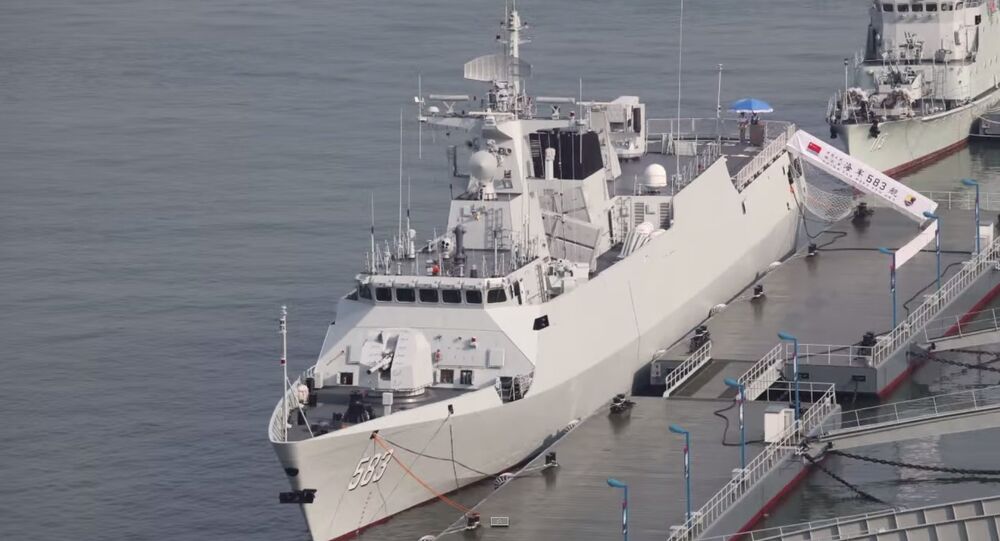 US and Chinese warships both conducted drills in the South China Sea over the weekend, with a corvette from the Hong Kong garrison engaging in live-fire target practice while a US aircraft carrier carried out flight operations.

On Sunday, the People’s Liberation Army Navy (PLAN) corvette Huizhou practiced shooting at a variety of targets in the South China Sea, and the Hong Kong garrison’s Sina Weibo account posted a video of the drills.

A Type 056 Jiangdao-class corvette, the 295-foot, 1,500-ton warship is dwarfed even by destroyers and commonly used for escort duties and coastal defense.

Though she be but little, she is fierce. According to the Global Times, the Huizhou’s crew trained in 10 weapons tests including firing jamming bombs, the ship’s main guns and light weapons, as well as helicopter landing training and emergency rescue. The warship focused on anti-submarine warfare, practicing tracking down and torpedoing the undersea hunters.

Although the Chinese Maritime Safety Administration announced several live-fire drills in the South China Sea this month, the Huizhou’s were not on the schedule reported by the Global Times last week prior to the first such drills.

Other exercises the PLA has held recently include massive marine assault war games in Guangdong and Hainan, which rehearsed both staging and defending against amphibious assaults, as well as live-fire exercises in the East China Sea.

However, the Huizhou was far from the only warship to crowd the waters off China’s southern coast. The US Navy aircraft carrier USS Ronald Reagan briefly returned to the South China Sea over the weekend, venturing in from the Philippine Sea to conduct flight ops on Friday and Saturday.

The Reagan was joined by the cruiser USS Antietam and the destroyers USS Mustin and USS Rafael Peralta, according to a Navy news release.

“Operations in the South China Sea continue to demonstrate enduring US commitment to allies and partners and a cooperative approach to regional stability and freedom of the seas,” the Navy said. “The Ronald Reagan Carrier Strike Group is forward-deployed to the US 7th Fleet area of operations in support of a free and open Indo-Pacific.”

In June, the US State Department defined Washington’s rejection of Chinese sovereignty claims in the South China Sea, using the conflict over four groups of islands as a leverage point to try and separate regional nations like Vietnam and the Philippines from friendly association with Beijing. Since then, US military activities in the region have increased drastically, with dual-carrier drills, regular bomber patrols and a daily stream of US reconnaissance aircraft flying along the Chinese coast.

On Tuesday, CNN published what it said was the first footage from a US spy aircraft over the South China Sea in two years, showing reporter Ivan Watson tagging along on a US Navy P-8A Poseidon maritime patrol craft as it flew close enough to Chinese-claimed territory to be warned away by PLA officials on the radio.