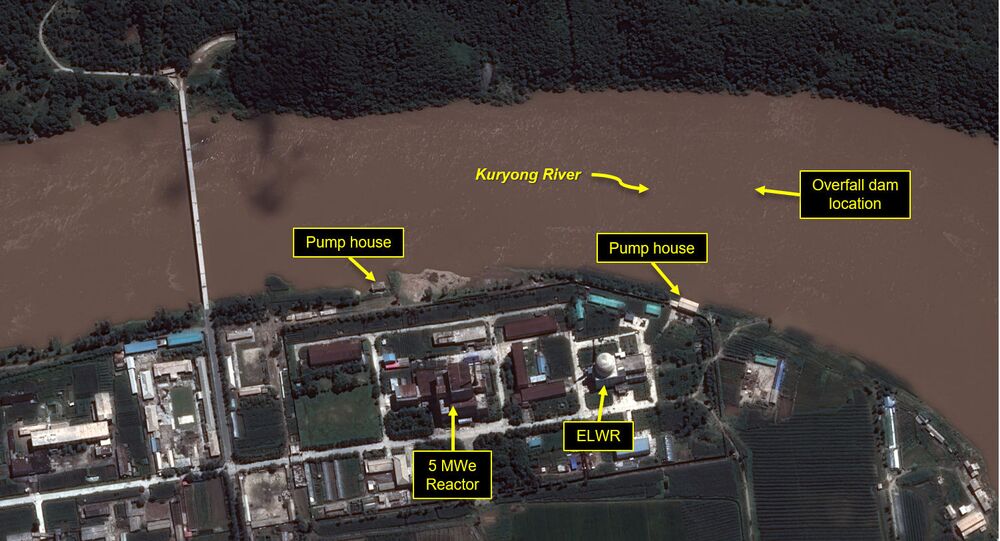 A heavy rainy season has pushed North Korean rivers over their banks, threatening the country’s primary nuclear facility. Recent satellite photos show a nearby river used for cooling the reactors has swallowed most of the shoreline facilities.

According to several sets of photos from the last few weeks, water levels along the Kuryong River have risen dramatically as a result of torrential rains, bringing the river up the embankment to the pump houses that supply water to the reactors at the Yongbyon Nuclear Complex.

The photos, taken by the French Pleiades satellite constellation and obtained by 38 North, an extension of the Washington, DC-based Stimson Center think tank that focuses on the Democratic People’s Republic of Korea (DPRK), show nearly all of the facilities built along the riverside totally submerged on August 6.

The facility houses the DPRK’s primary refined uranium-producing nuclear reactor, which 38 North notes is believed to be shut down at the moment, but is also home to a light water reactor currently under construction and intended for electricity generation purposes.

“Although the 5 MWe Reactor does not appear to have been operating for quite some time and the Experimental Light Water Reactor (ELWR) has yet to come online, both would need consistent water flow to operate,” 38 North wrote on Wednesday. “Therefore, if or when either of the reactors is operating, clogged intakes and/or broken or damaged pumps would necessitate a shutdown.”

Previous photos of the site from July 22 show the river at normal levels, illustrating just how dramatic the water rise has been. Weeks of constant rain have caused extensive flooding across the Korean Peninsula, which caused a levee to give way in North Hwanghae Province last week, sweeping away nearly a thousand homes, Korean Central News Agency (KCNA) reported.

NK News republished photos from the DPRK’s Korean Central Television (KCTV) on August 6, showing that river levels across the country rose by several meters, bringing the Taedong River up to the bottoms of bridges in the capital city of Pyongyang. Yonhap News Agency reported that in the last few weeks, some parts of the DPRK have received almost a year’s worth of rain.

The South Korean Defense Ministry would not confirm the reports to Seoul-based Yonhap on Thursday, with Defense Ministry deputy spokesperson Col. Moon Hong Sik saying, “Our military is always closely monitoring the North's nuclear and missile activities, and the authorities of South Korea and the United States are keeping a close cooperation system.”

However, 38 North also noted that newer photos from just two days later on August 8 and from August 11 show the waters already receding, revealing the facility to have received little damage. However, those photos were not included in the think tank’s report.

In February 2019, during the warmest period of denuclearization negotiations between the US and DPRK, North Korean leader Kim Jong Un offered to demolish the Yongbyon nuclear site and invited inspectors to tour the results, if the US would offer relief from strangling economic sanctions, but the Trump administration’s position has remained that sanctions will stay in place until all of North Korea’s nuclear weapons and facilities are destroyed, so the deal fell through.