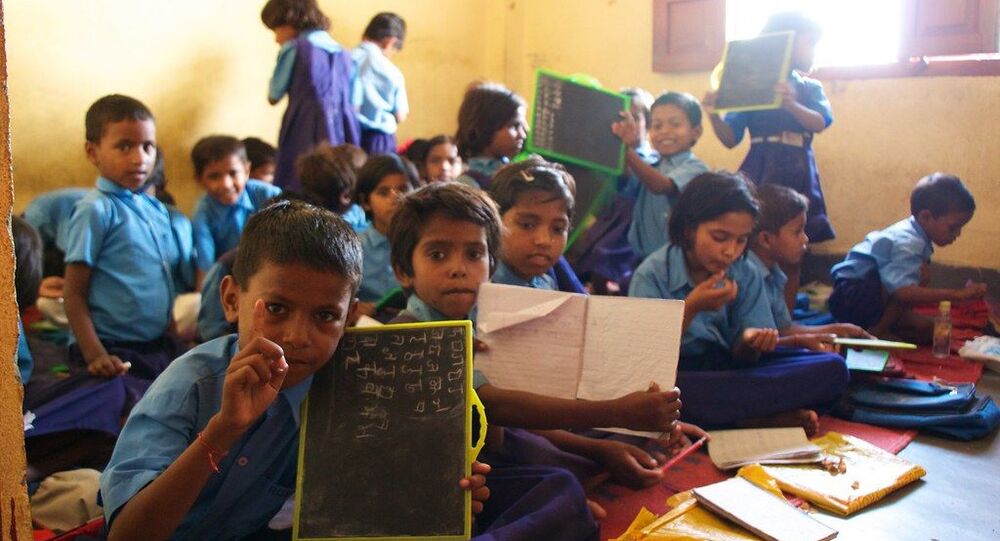 New Delhi (Sputnik): Delhi has 350,000 students studying at schools under the BJP-ruled North Delhi Municipal Corporation - a civic body. Manish Sisodia raised concerns calling it a "serious " situation amid reports of over a five-month delay in issuing books to 714 schools, and salaries to teachers.

Delhi's Deputy Chief Minister Manish Sisodia on Tuesday lashed out at the Bharatiya Janata Party, saying that his Aam Aadmi Party (AAP) is willing to take charge of the schools run under the BJP-ruled civic bodies in the city, in view of the latter's "incapability" of managing them.

“I keep hearing that municipal corporation (civic bodies) school teachers are not getting salaries and students are not getting books. If the BJP is incapable of running them, give it to us and we will run them properly. But the BJP should first admit that they can't manage them", Sisodia told reporters here.

On Monday, Sisodia in a letter to Development Minister Satyender Jain alleged that civic body funds allocated by the AAP-led Delhi government are being “diverted” instead of being used as they should be.

Sisodia, who is also the capital city's Education Minister, said no one has the right to “play havoc with the lives” of young children and termed it a matter of "serious concern".

“The allegation against the north corporation, if found true, is serious. The Delhi government has paid INR 8.53 billion ($113.7 million) for primary school education to the three municipal corporations and bulk of the share, i.e INR 3.9 billion ($52.4 million), has been provided to the North Delhi Municipal Corporation", said Sisodia.

© REUTERS / DANISH SIDDIQUI
No to New York Style Death Rates: Delhi Deputy Chief Says Focus is Minimising Damage From Corona
He added that instead of the Delhi government paying huge grants to the Municipal Corporation, “which are diverted for other purposes”, it would be better if these schools are taken over by t he Directorate of Education, Delhi Government.

A teacher at a South Delhi government school confirmed on condition of anonymity that neither salaries nor books have been given in their schools.

Meanwhile, senior officials in the civic body have denied the allegation of diversion of funds, calling them baseless.

A spokesperson for the North Corporation Ira Singhal clarified that the process has been stalled due to the COVID-19 lockdown and procedural delays.

© REUTERS / DANISH SIDDIQUI
India Needs Immediate Plan to Avoid Confusing COVID-19 and Dengue Patients, Virologist Says
"The order for books was placed before the coronavirus, but the rates of the books were revised and the process was stalled due to the lockdown. The new purchase order has now been approved by the mayor and the education committee. Books will be distributed to the students by the first week of September at the latest", she said.

Delhi BJP spokesperson Shankar Kapoor had acknowledged the delay in allotment of the books but alleged that the Delhi government had not released funds for the civic bodies to obtain them.